Connective Open Space Near Half of Houston’s Residents 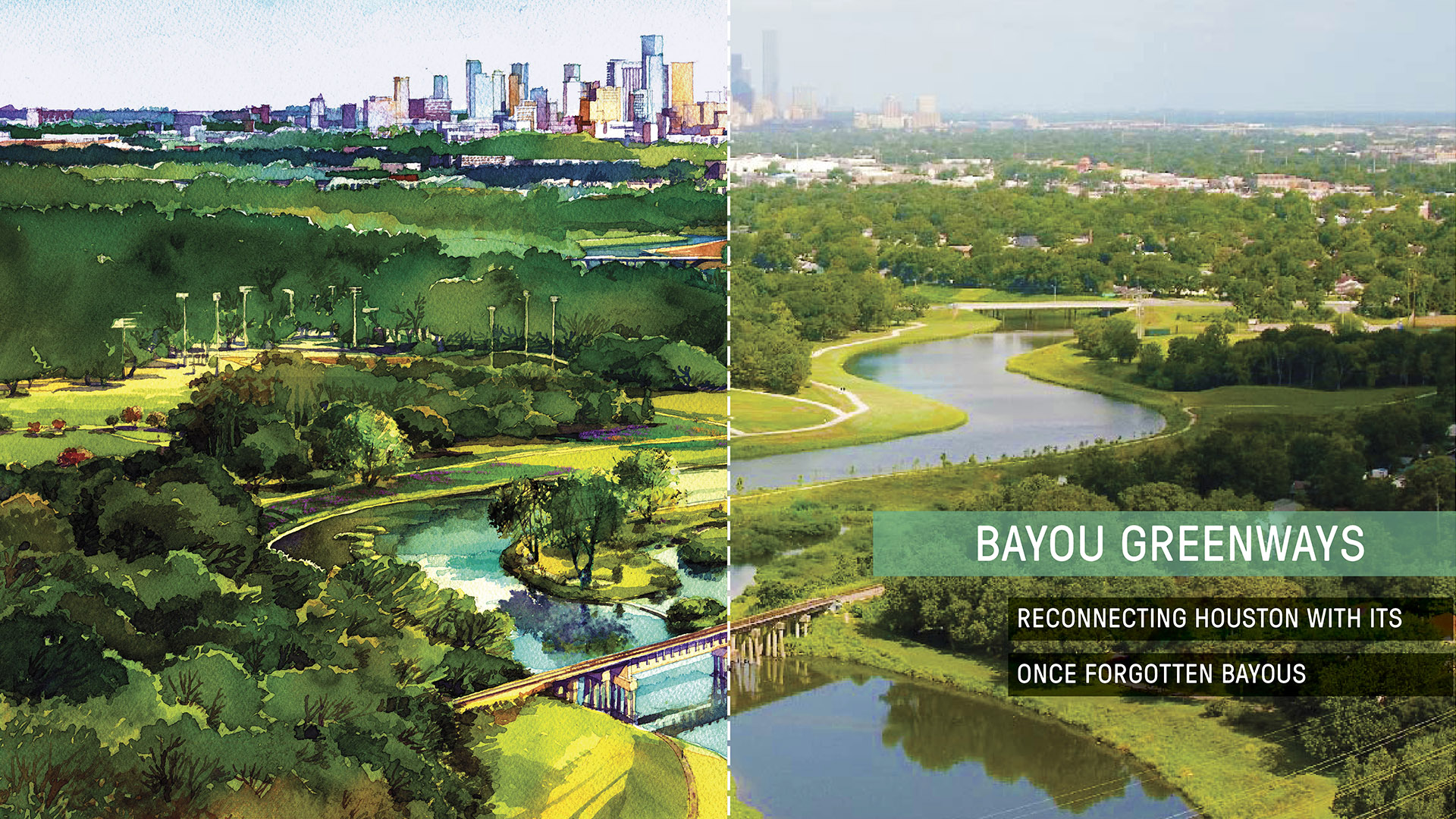 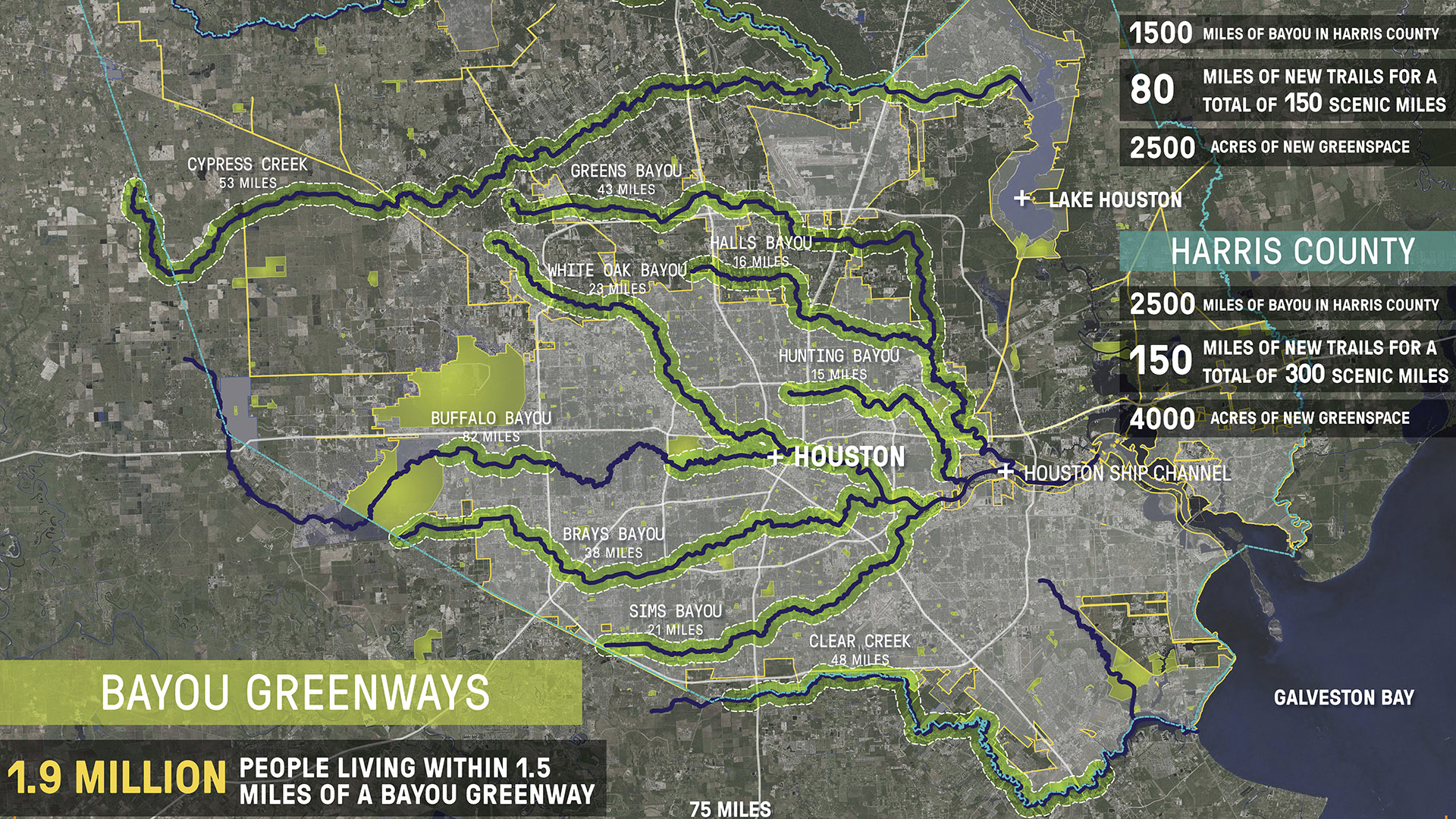 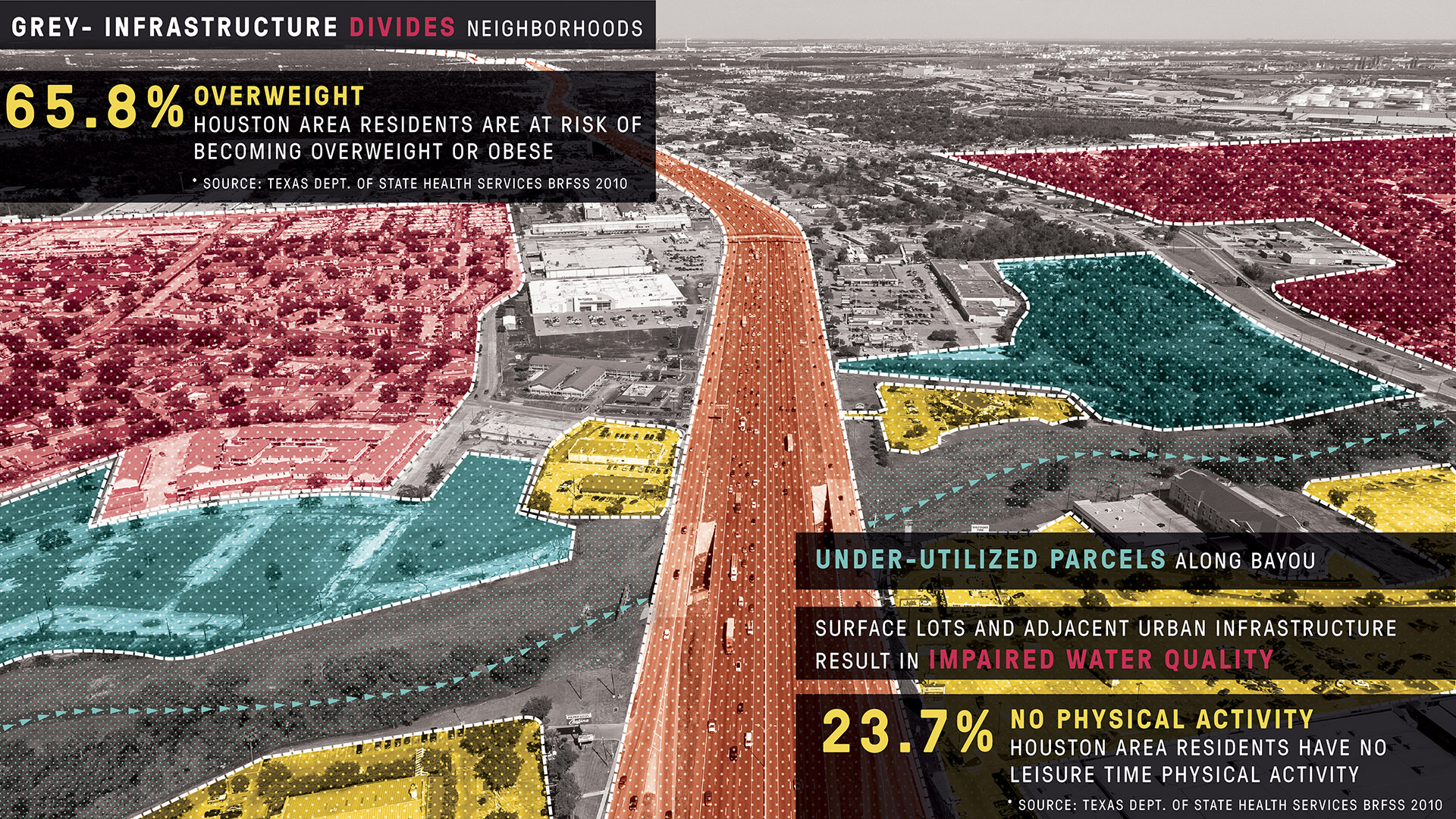 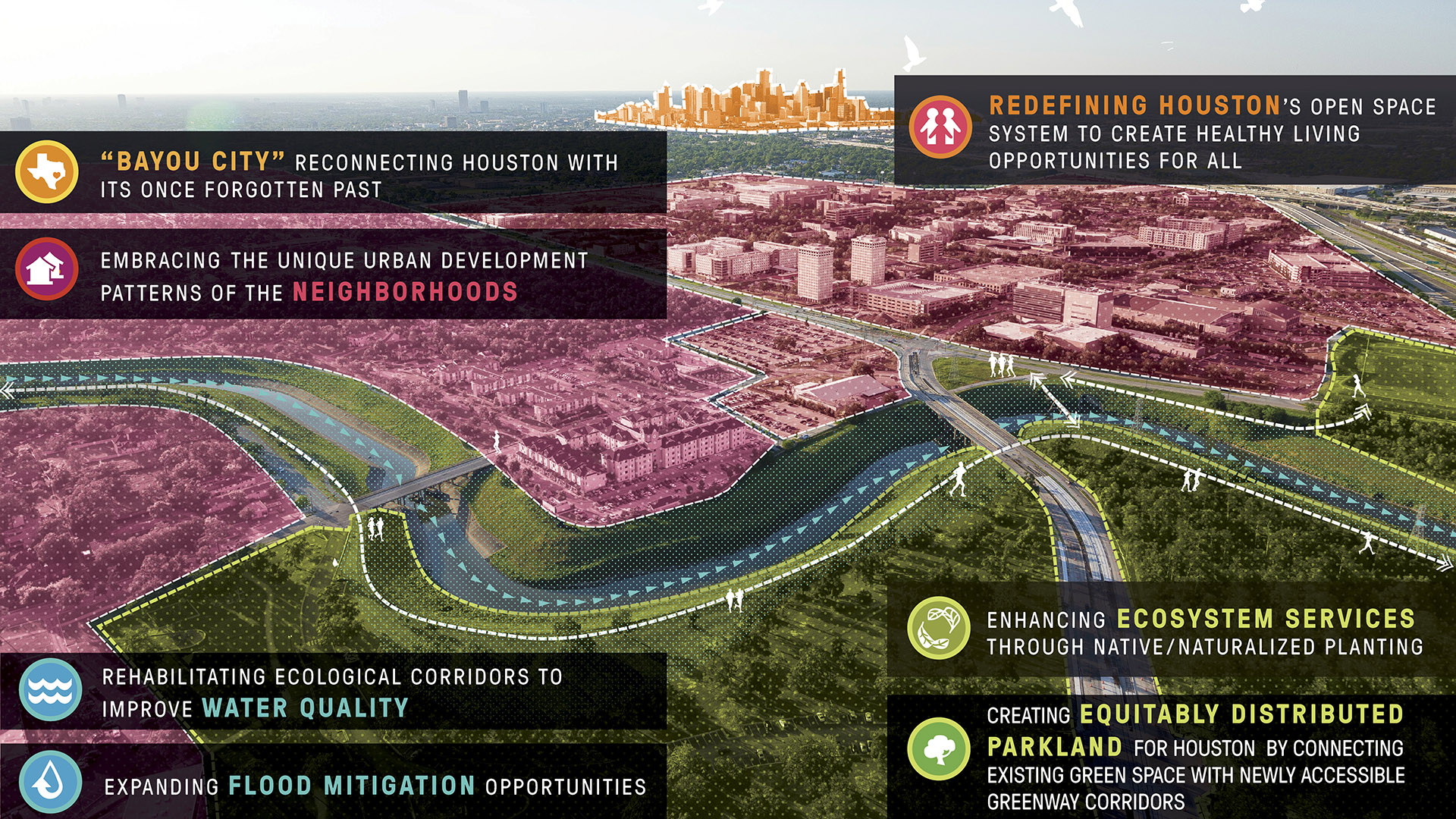 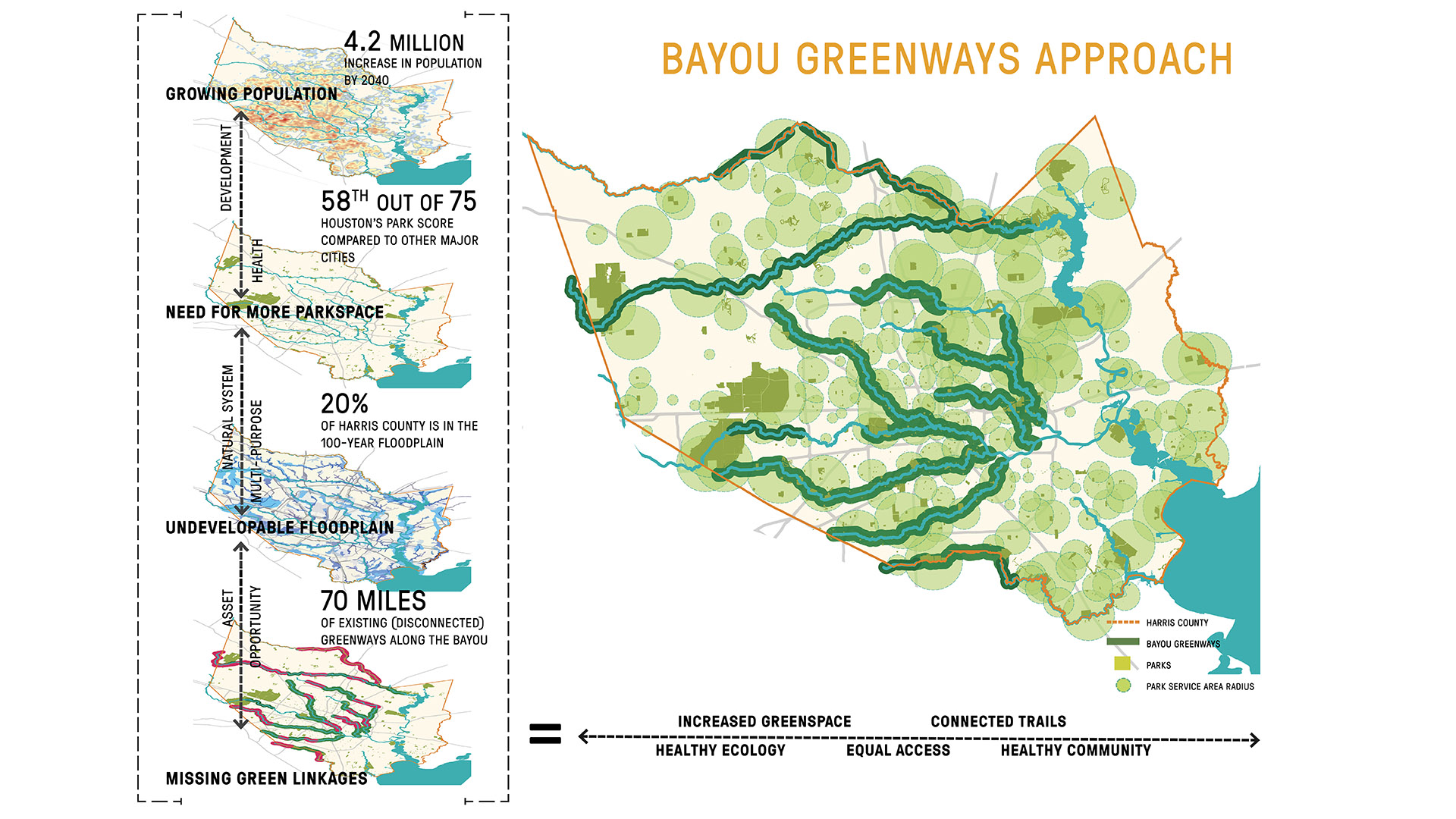 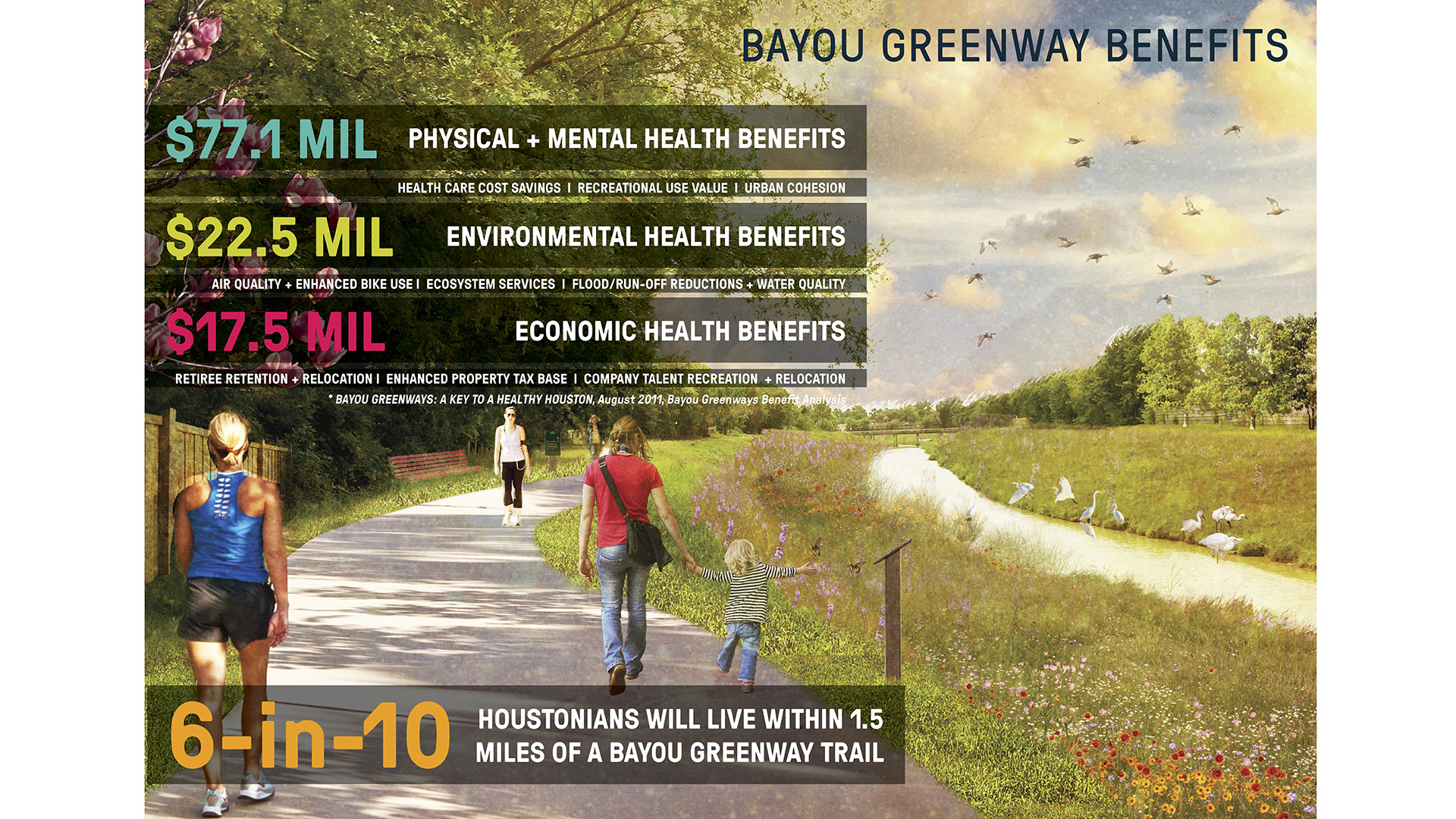 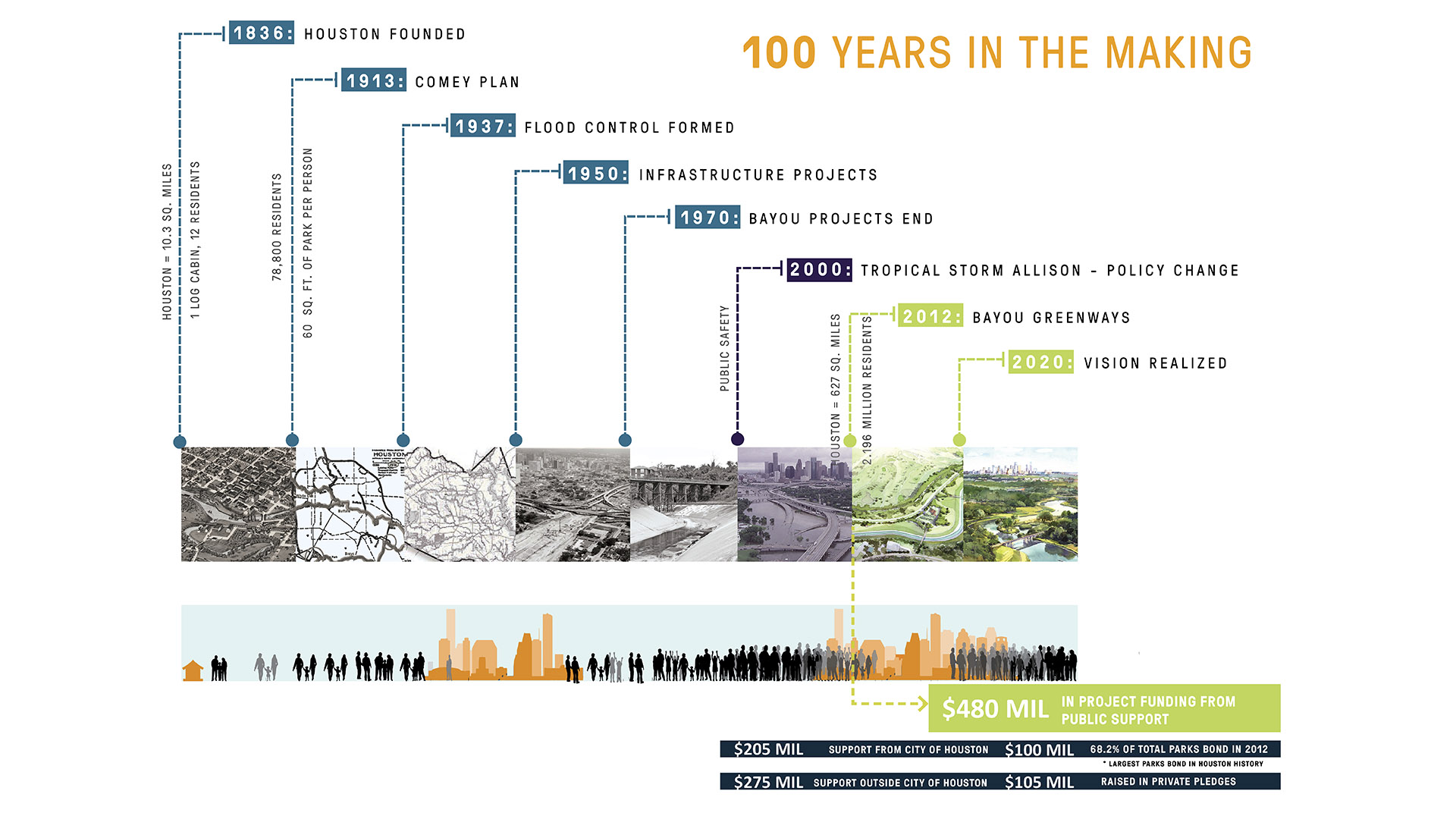 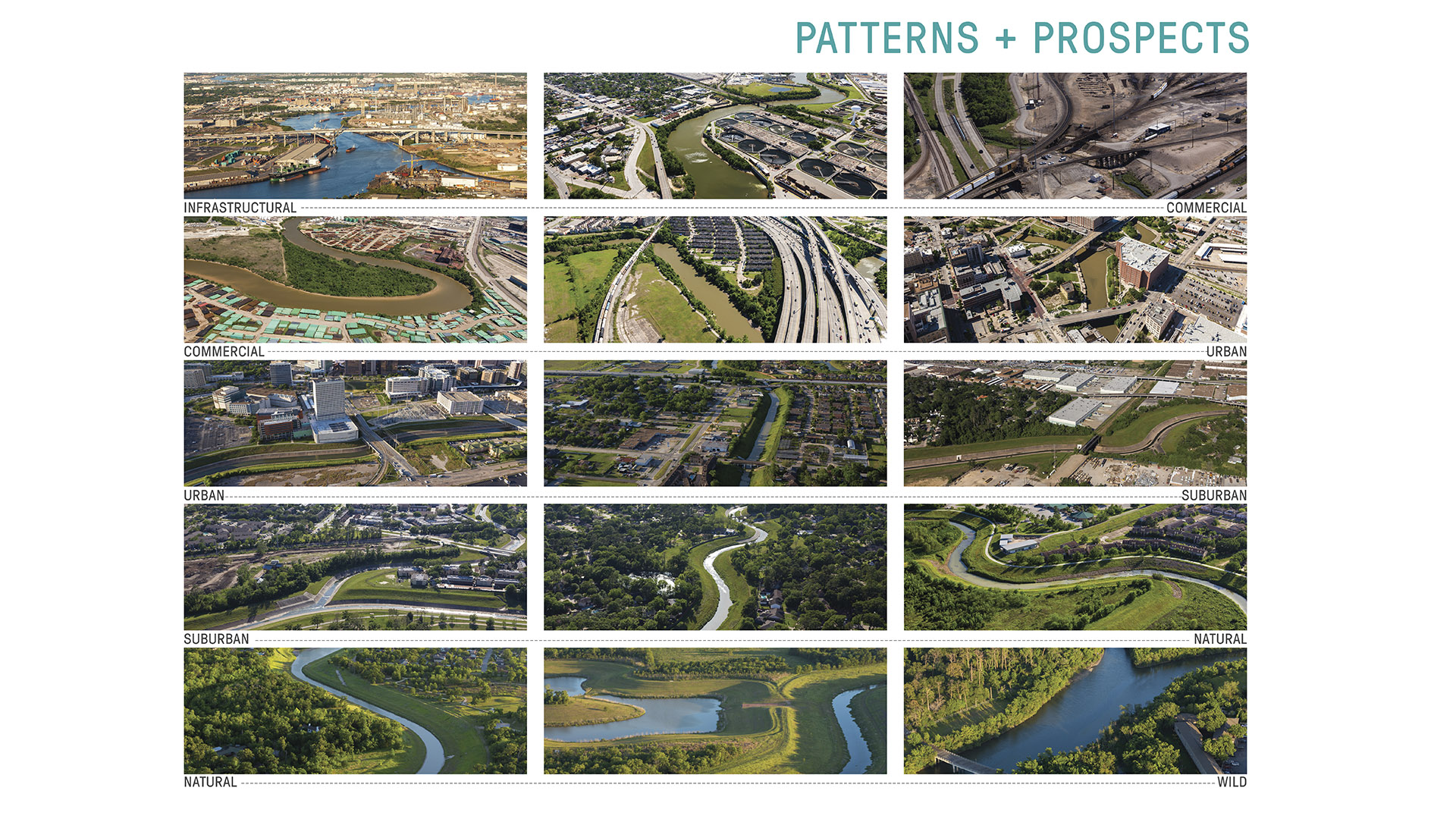 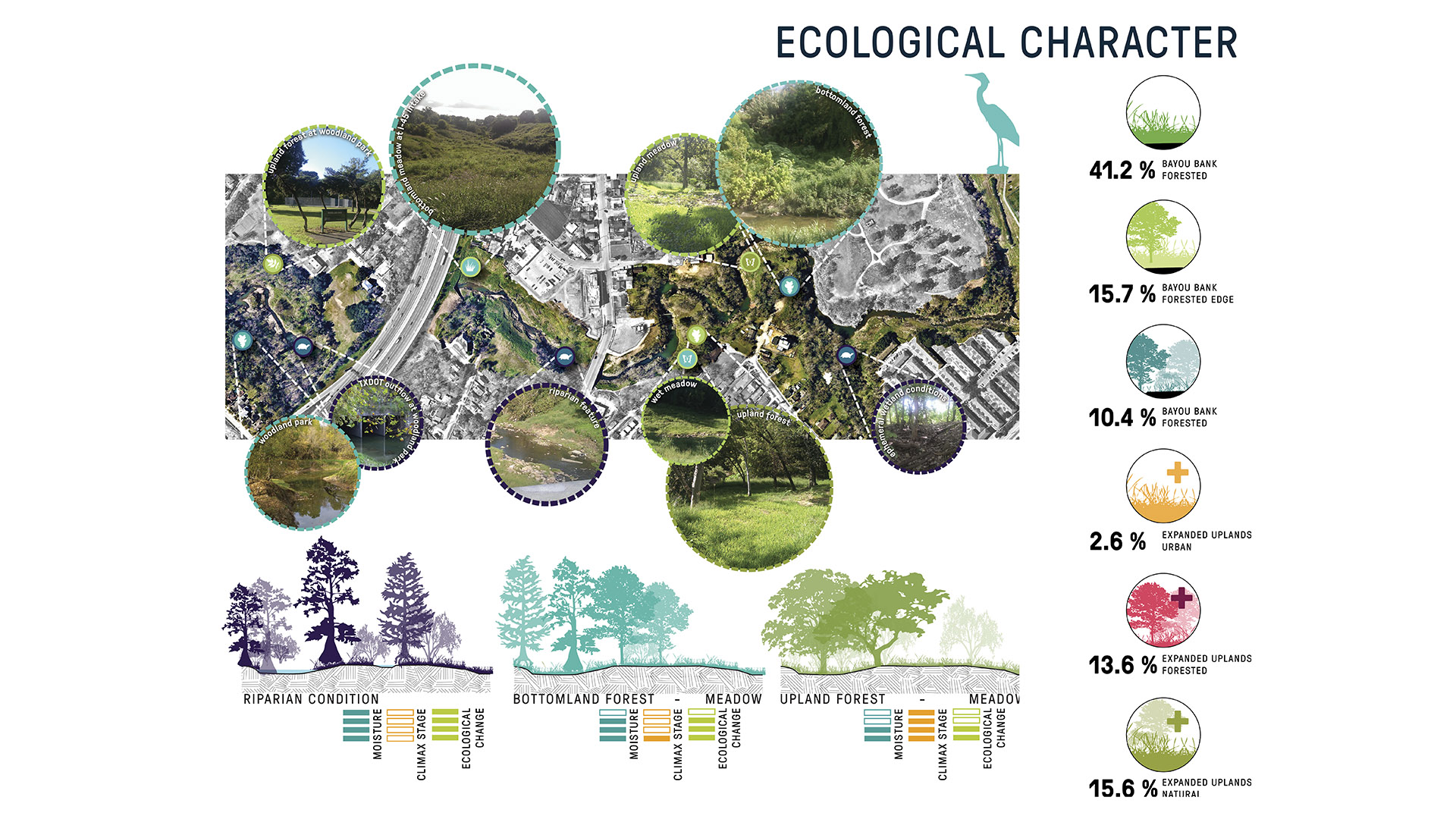 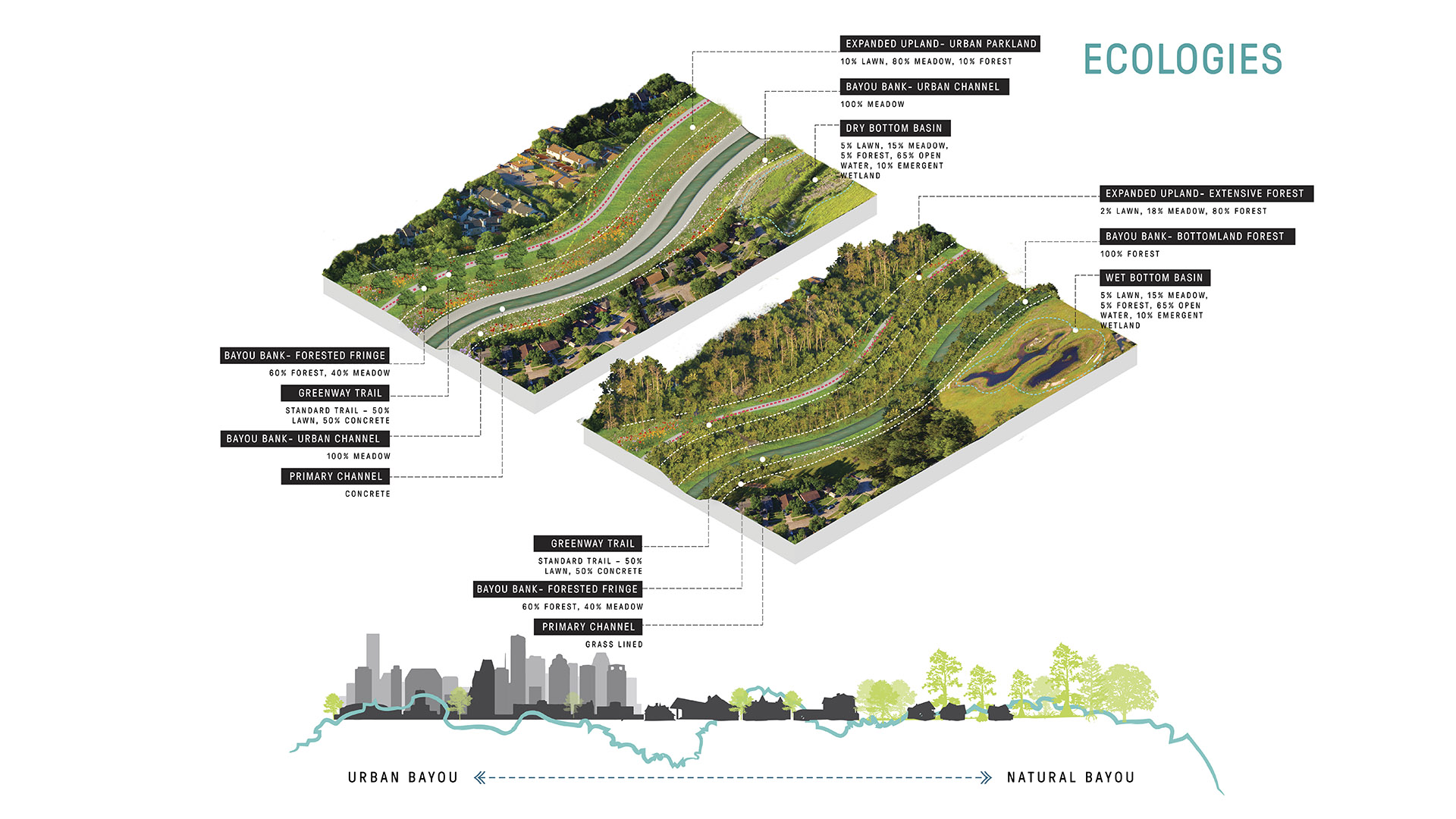 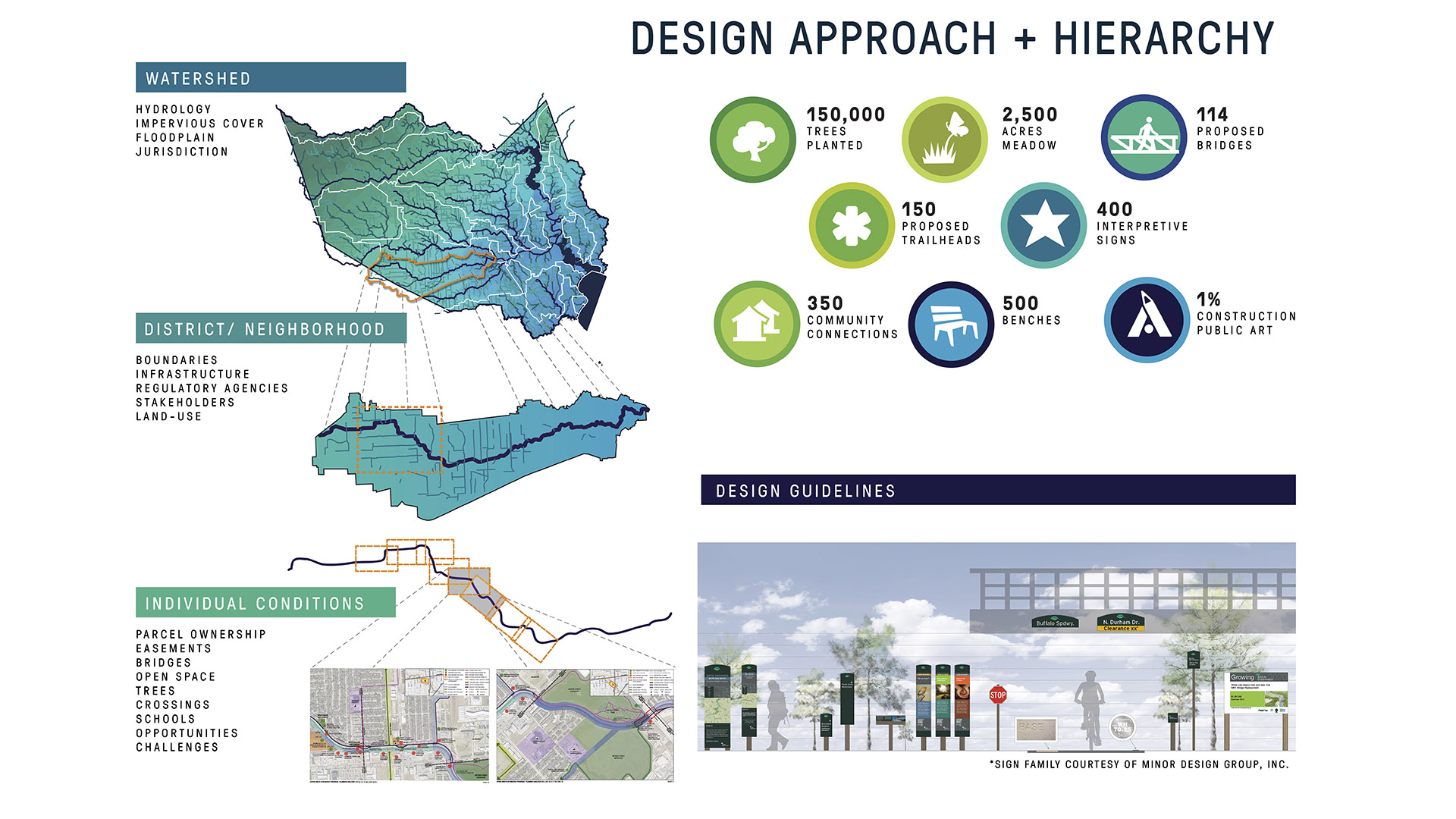 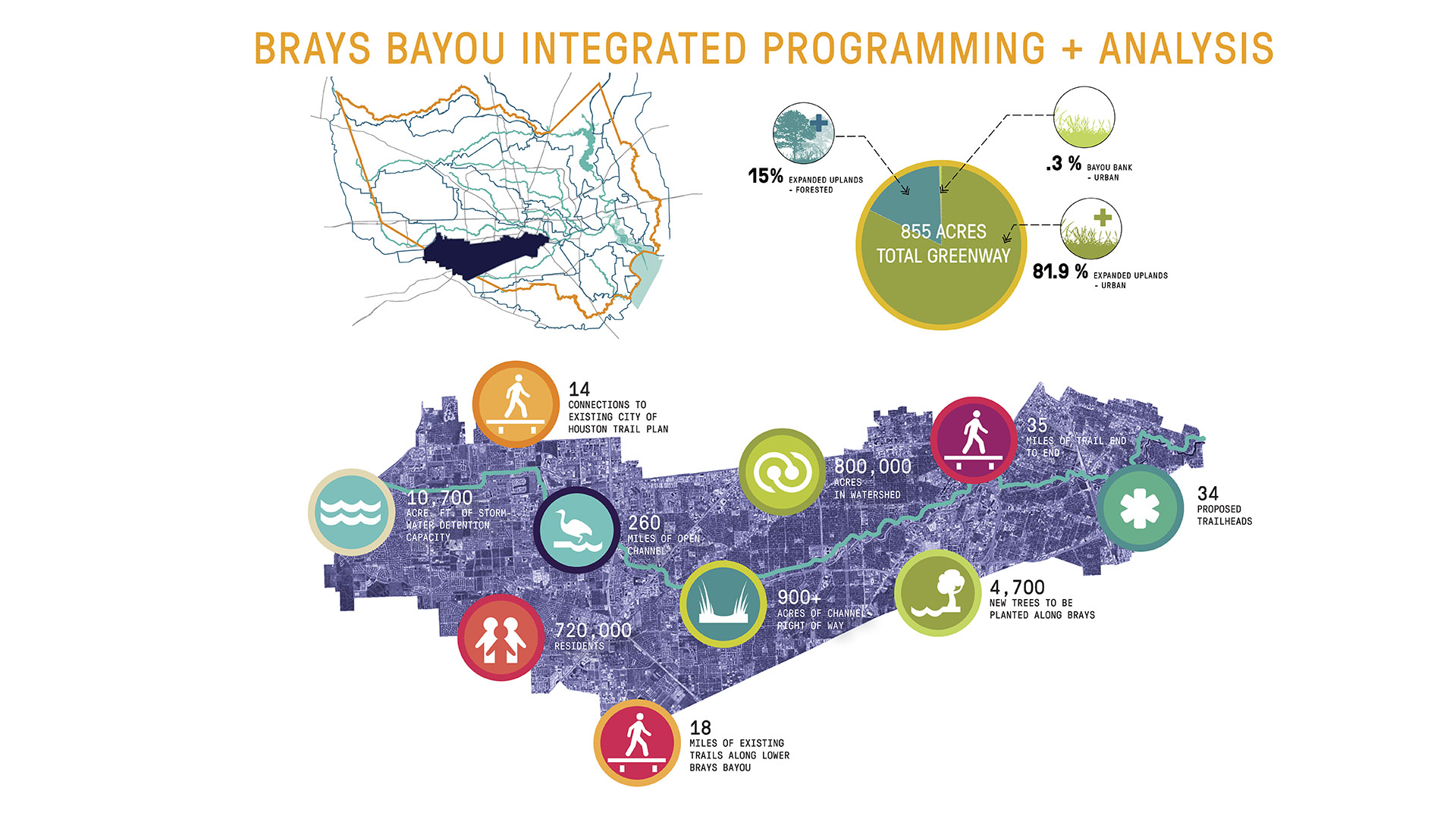 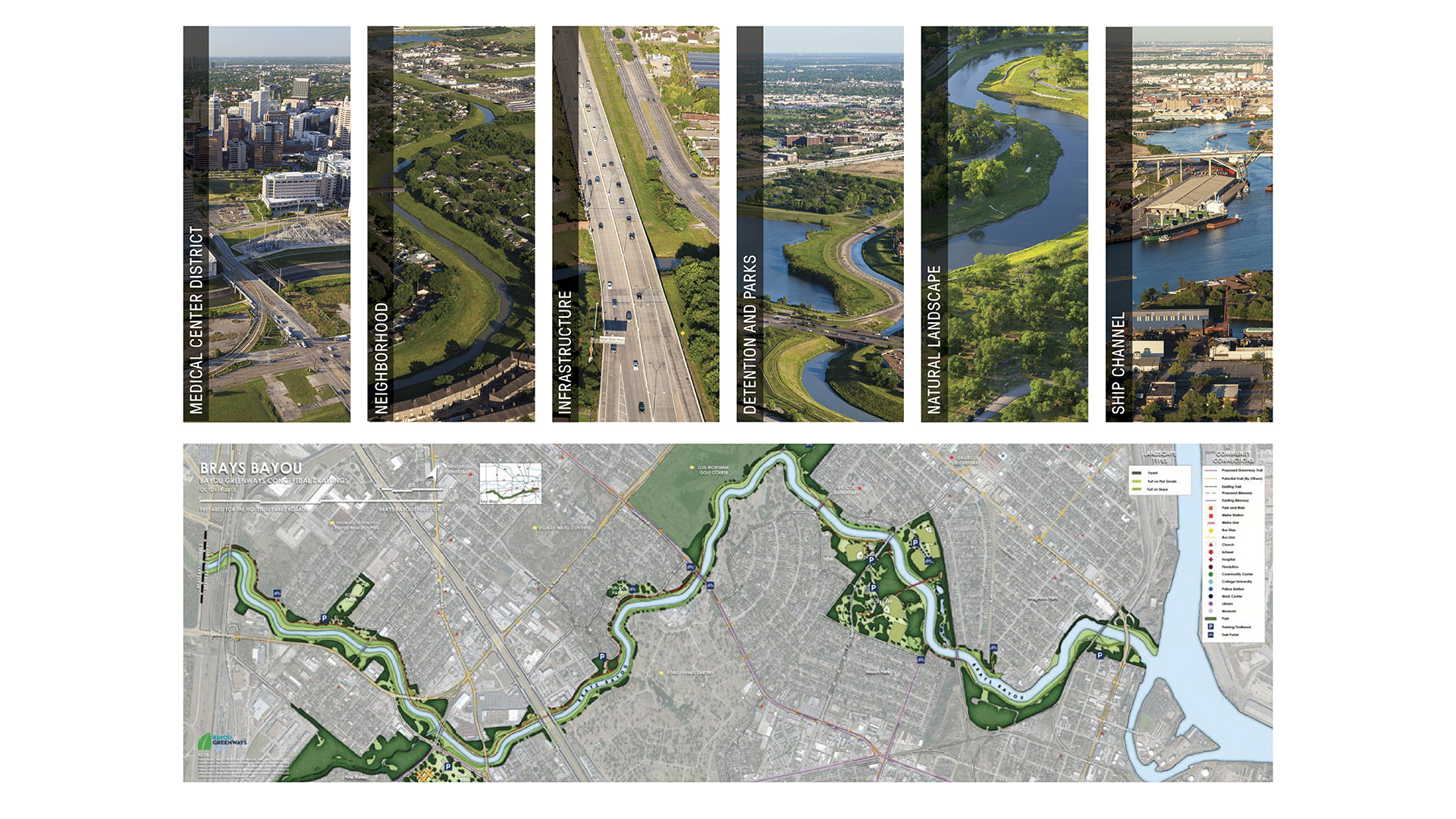 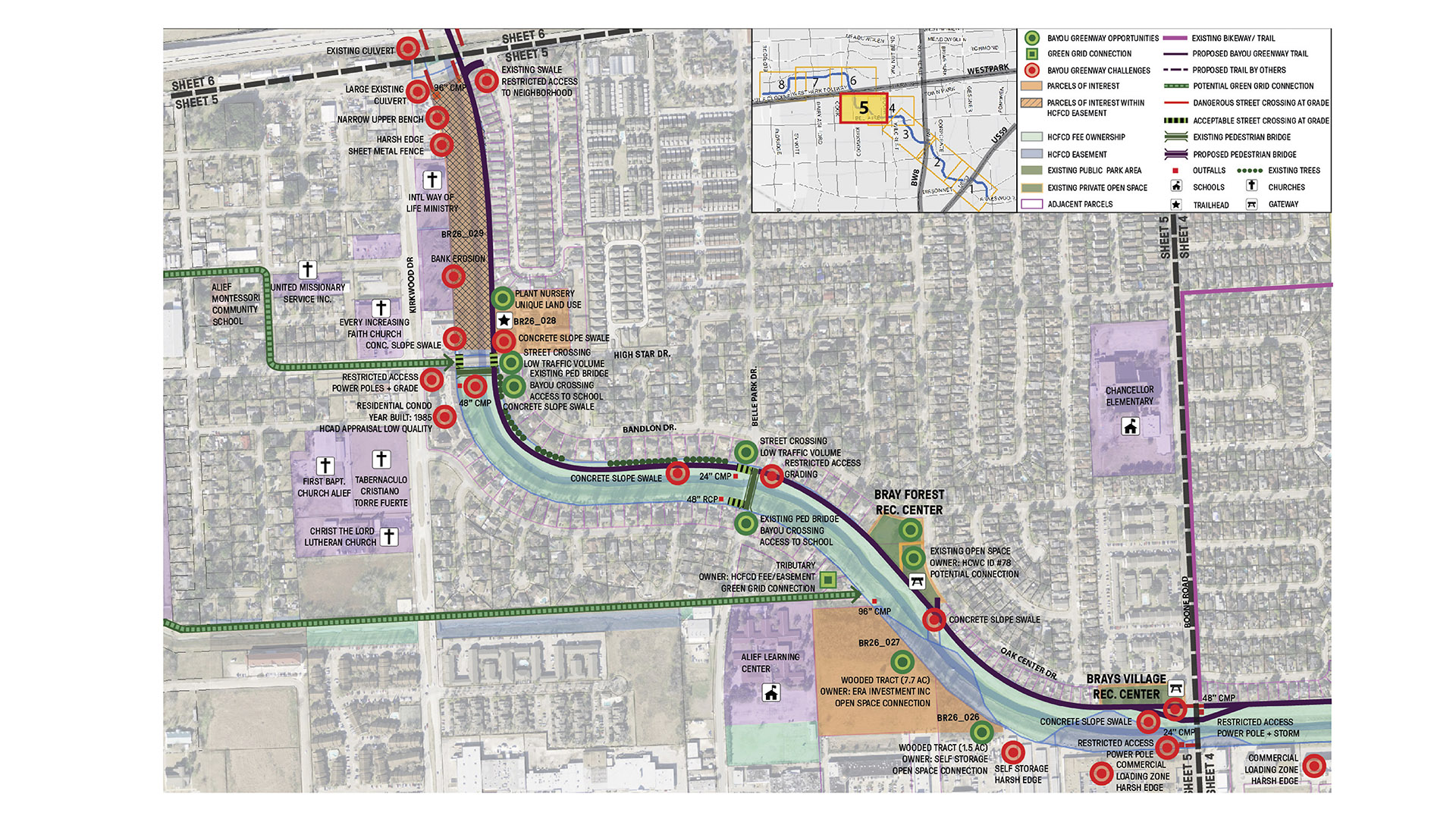 While Houston does have significant park spaces and trails, the city of no zoning has historically been unable to create enough designated open spaces and the necessary connectivity between them. The key to increasing the open space network lies within the region’s floodplains. Relatively flat terrain, intense rain events, and urbanized watersheds create broad jurisdictional floodplains. With developmental restrictions and regulatory controls, vast land areas are left as unused green space or vacant lands. The Bayou Greenway plan recommends leveraging these underutilized spaces to create trail corridors, new parks, and flood mitigation facilities that will be within 1.5 miles of 6 out of 10 Houstonians. The resulting network will stretch over 300 miles and include 4,000 acres of new land connected to existing neighborhoods, schools, churches, and other community assets. The acquisition areas will allow access where physical or jurisdictional obstacles now occur, increase flood mitigation opportunities, and help reconnect currently fragmented ecologies. Resultant facilities within the greenway corridor will perform as functioning recreation space throughout the year, with just a 1% chance of experiencing a significant flood event during that time. Bayou Greenways addresses numerous health, safety, and welfare issues inherent in the daily lives of citizens in the nation’s fourth largest city. Rated as one of the unhealthiest, park-deficient, most economically divided, ethnically diverse, sprawling, and fastest-growing cities in the country, Houston faces enormous social challenges. Already five times the area of most North American cities, Houston is expected to double in population by the year 2035. The Bayou Greenways are now shaping the development fabric of the city by creating healthy connections that are in close proximity to the outdoor world and between highly diverse populations. As a comparison, Portland represents the next-largest green network in the nation, at half of Bayou Greenways’ distance, with 150 miles of multi-use trails. This is a very popular effort: in 2012, receiving the highest approval of all measures on the city ballot, Houston voters approved $100 million in public funding for the project, with a private match of $105 million.

A key component in the downtown revitalization strategy, Main Street Garden Park required razing two city blocks of buildings and garages to make way for its transformation into a vibrant public space teeming with civic life. This two-acre park fosters downtown residential and commercial growth and was designed to accommodate the needs of residents in adjacent...

Hermann Park is one of Houston’s great civic resources containing a significant urban forest and many public venues. It is the flagship of the Houston Park system, serving the recreation needs of the City’s diverse population of some four million and welcoming over six million visitors a year. However, like many urban parks in America, much of Hermann Park has...

Hunter’s Point South Waterfront Park was envisioned as an international model of urban ecology and a world laboratory for innovative sustainable thinking. The project is a collaboration between Thomas Balsley Associates and WEISS/MANFREDI for the open space and park design with ARUP as the prime consultant and infrastructure designer.

In honor of their late matriarch Evelyn, the Rubenstein family donated a historically and geographically prominent five-acre tract on the busy Bellaire Boulevard and created a conservancy to fund a public park with primarily private funds, while engaging the public in its design and development. This park seeks to be reflective and adaptive to the local cultur...

A key component in the downtown revitalization strategy, Main Street Garden Park required razing two city blocks of buildings and garages to make way for its transformation into a vibrant public space teeming with civic life. This two-acre park fosters downtown residential and commercial growth and was designed to accommodate the needs of residents in adjacent...

A year-round “food oasis” awaits visitors at A Tasteful Place, a new edible/display garden within the Dallas Arboretum. A continuation of SWA’s Arboretum work (which includes Red Maple Rill and the Children’s Garden), A Tasteful Place provides visual and hands-on education about plants and herbs that can be used in visitors’ daily cooking and explored in...