A Culturally and Environmentally Relevant Design to Catalyze the City's Downtown 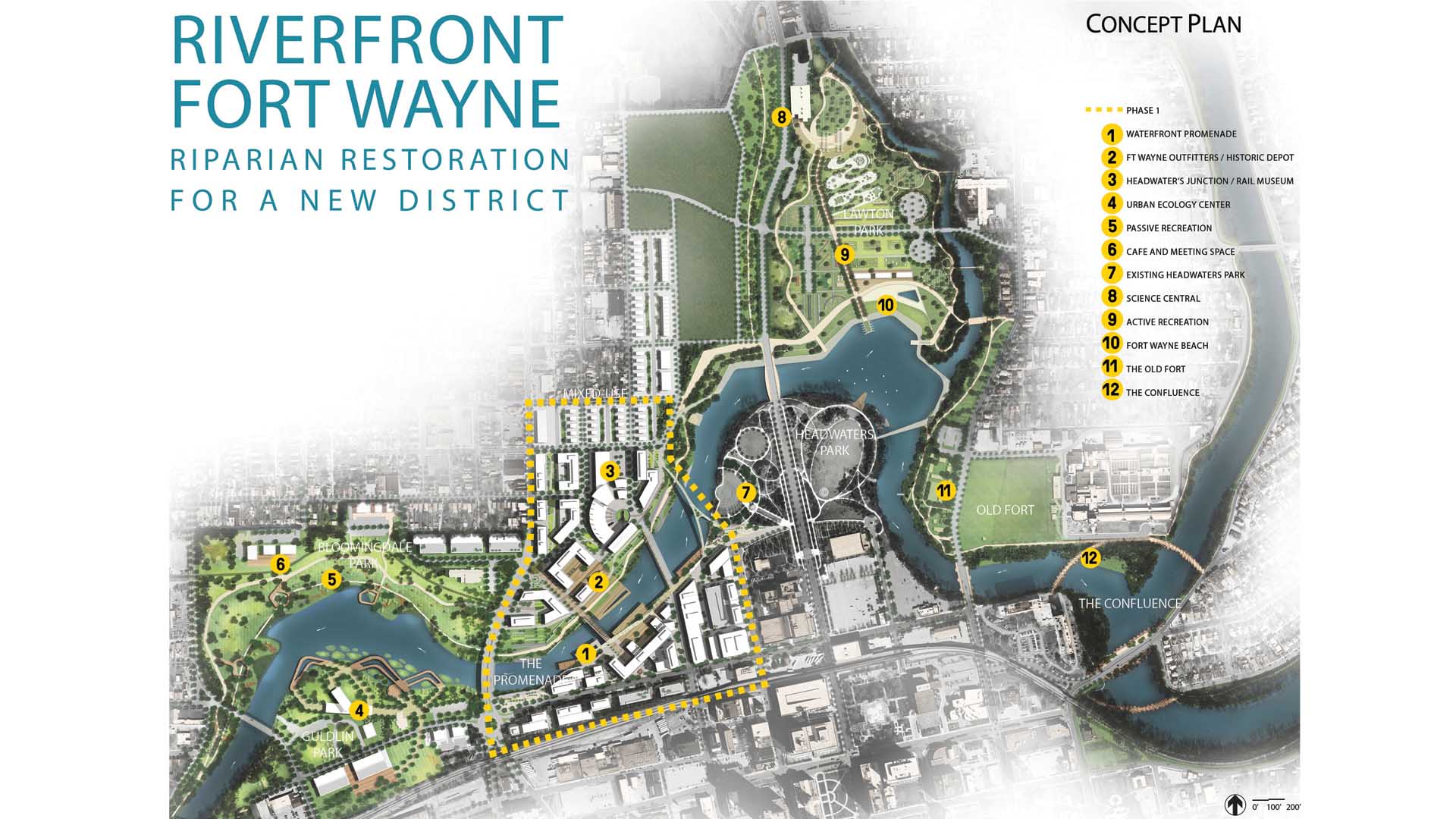 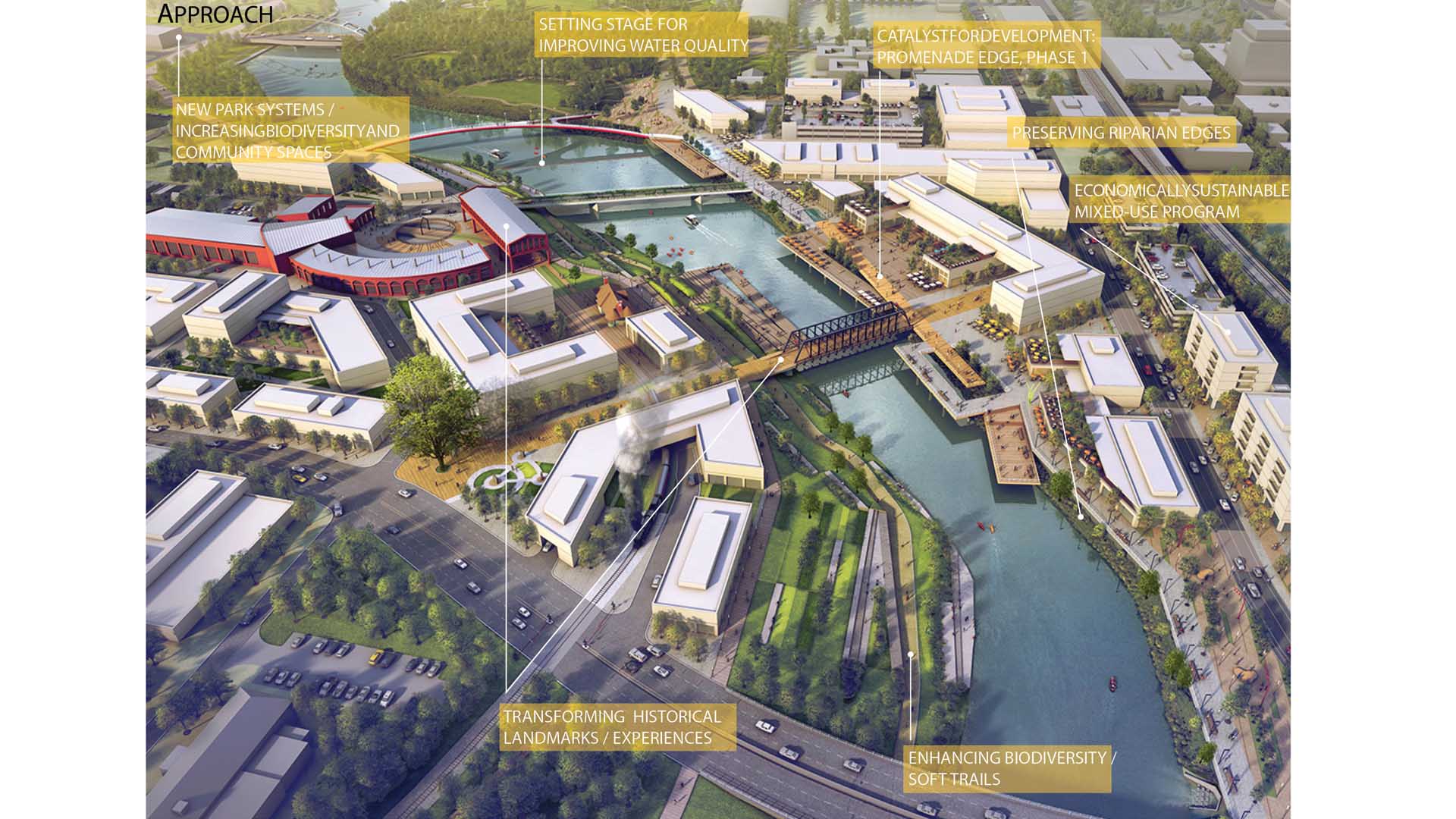 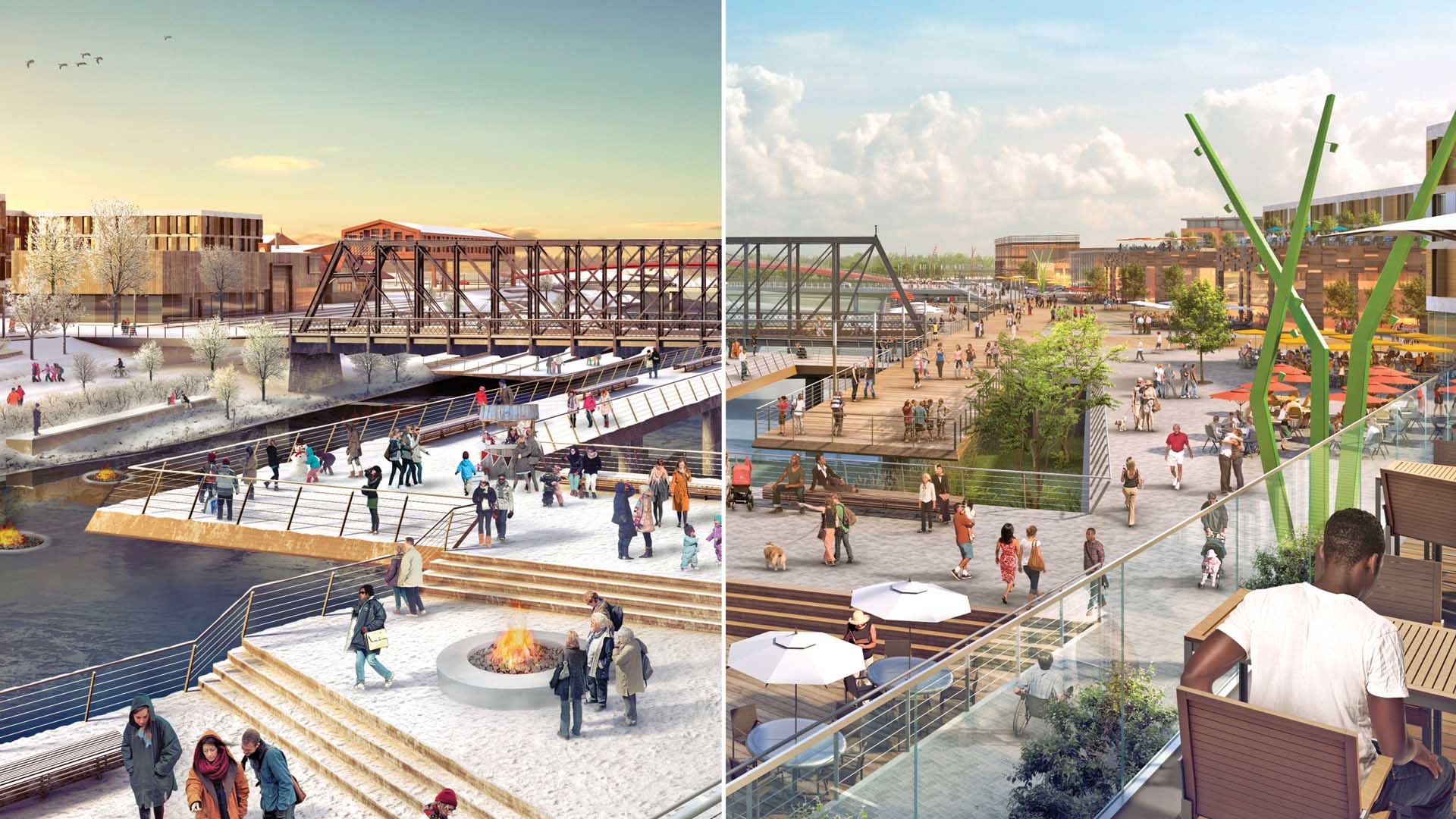 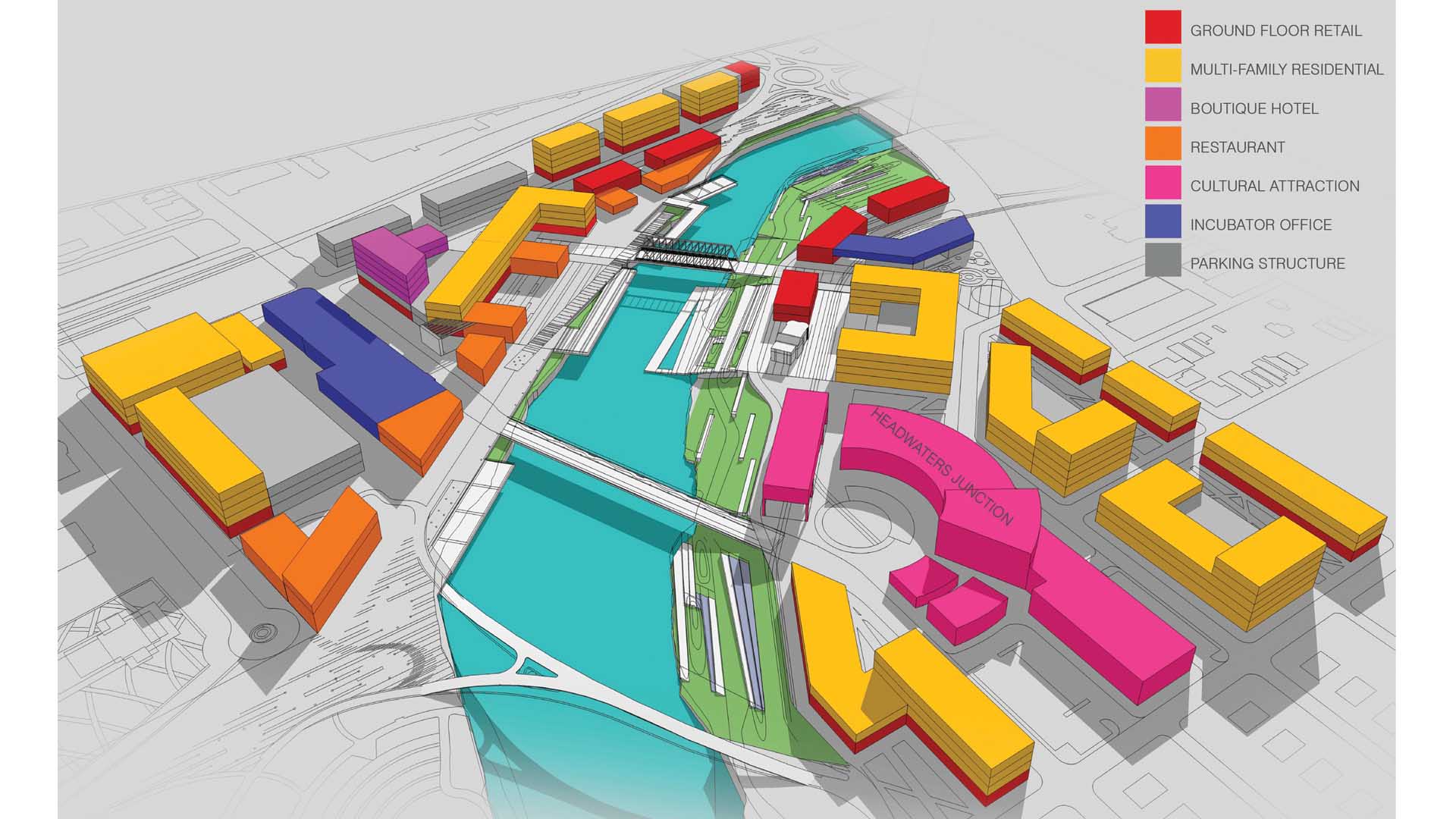 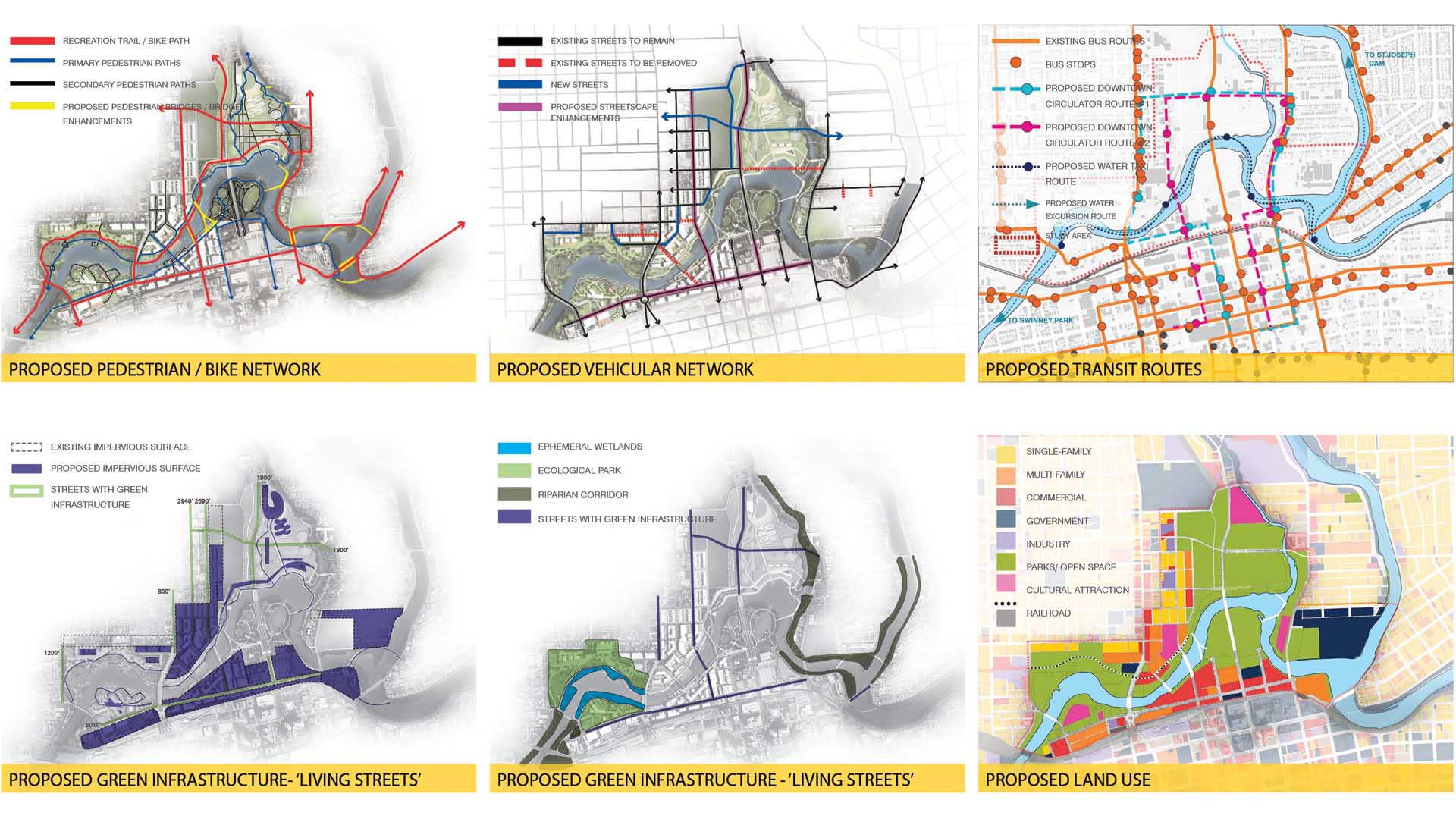 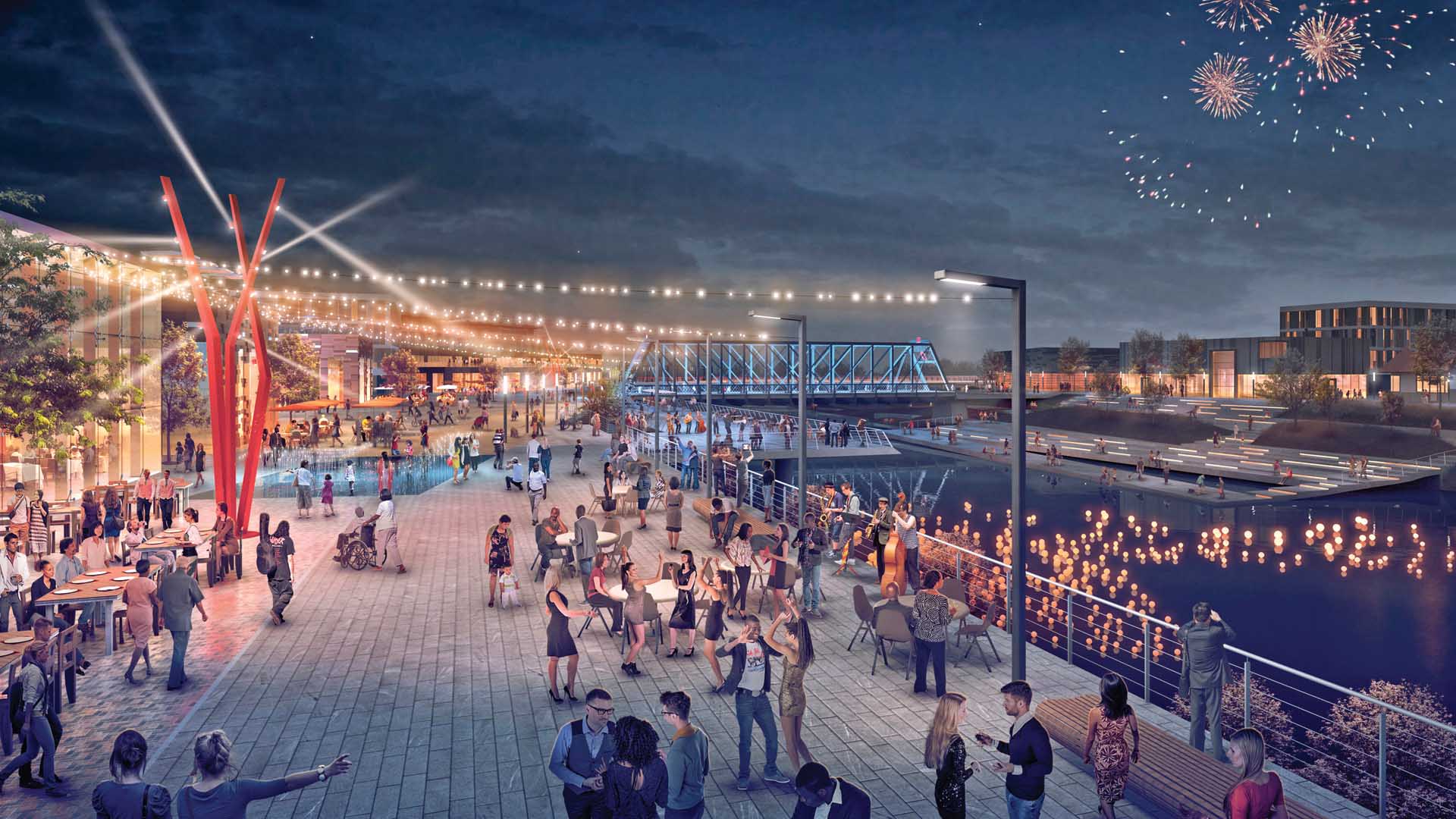 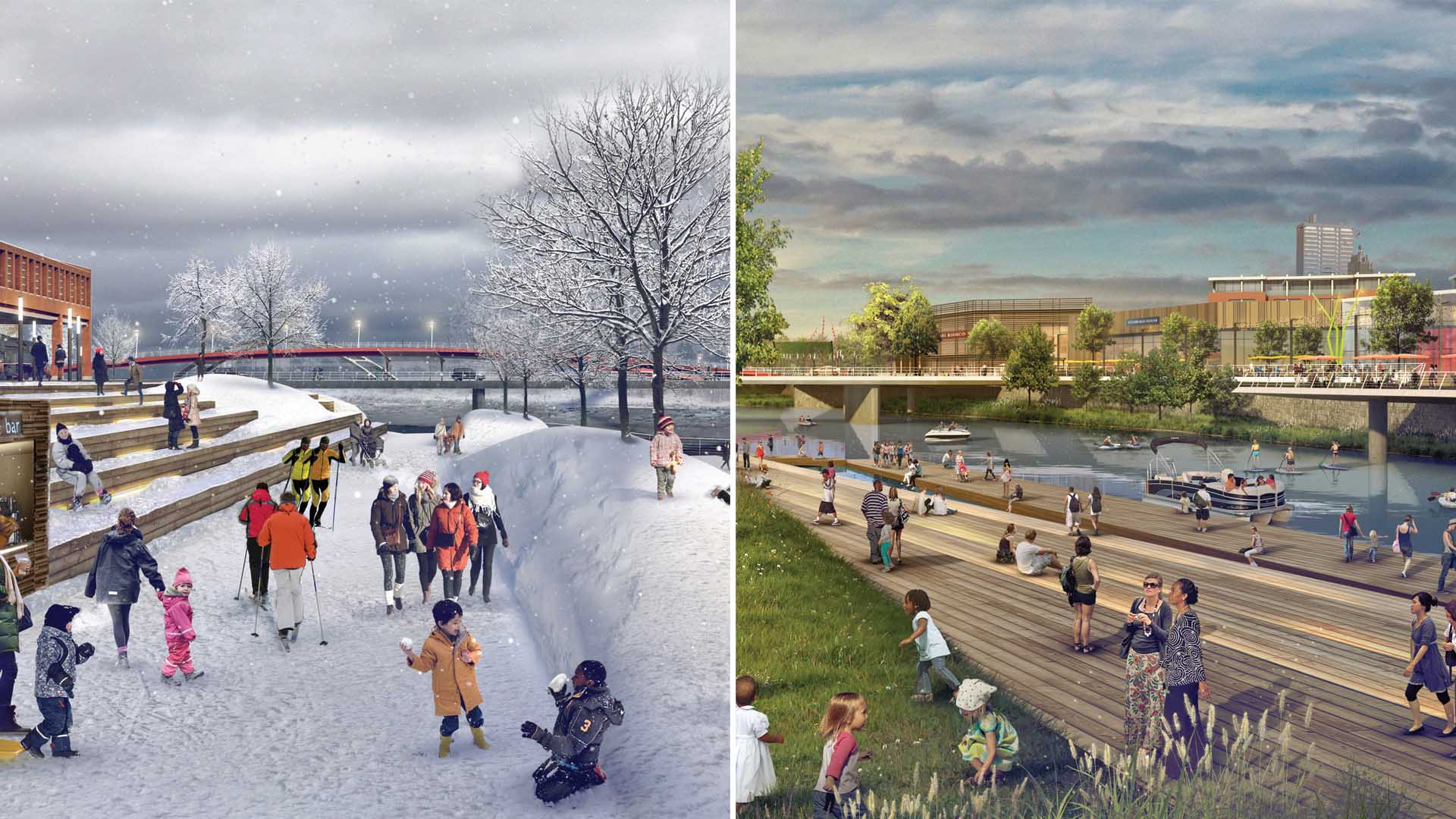 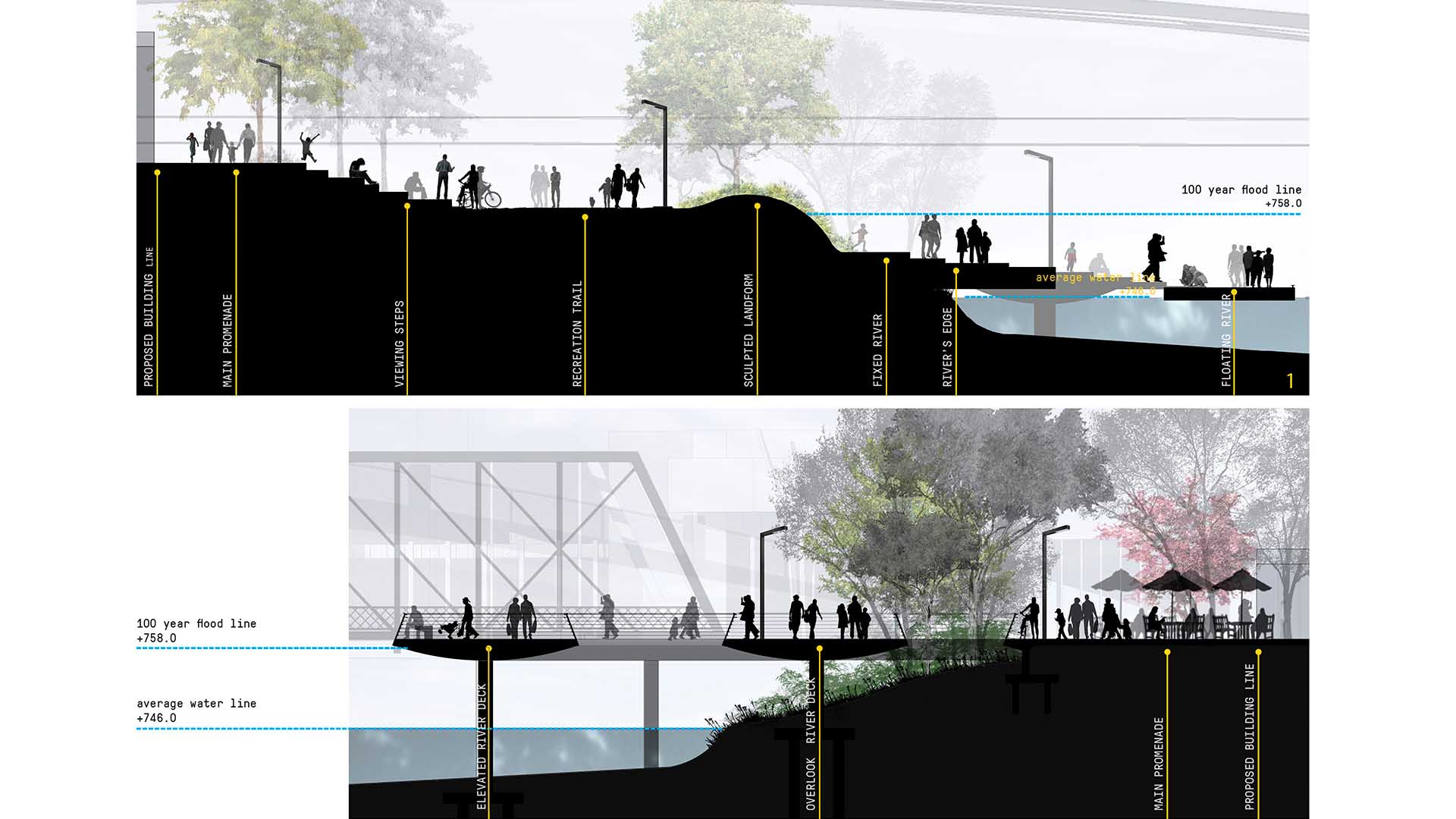 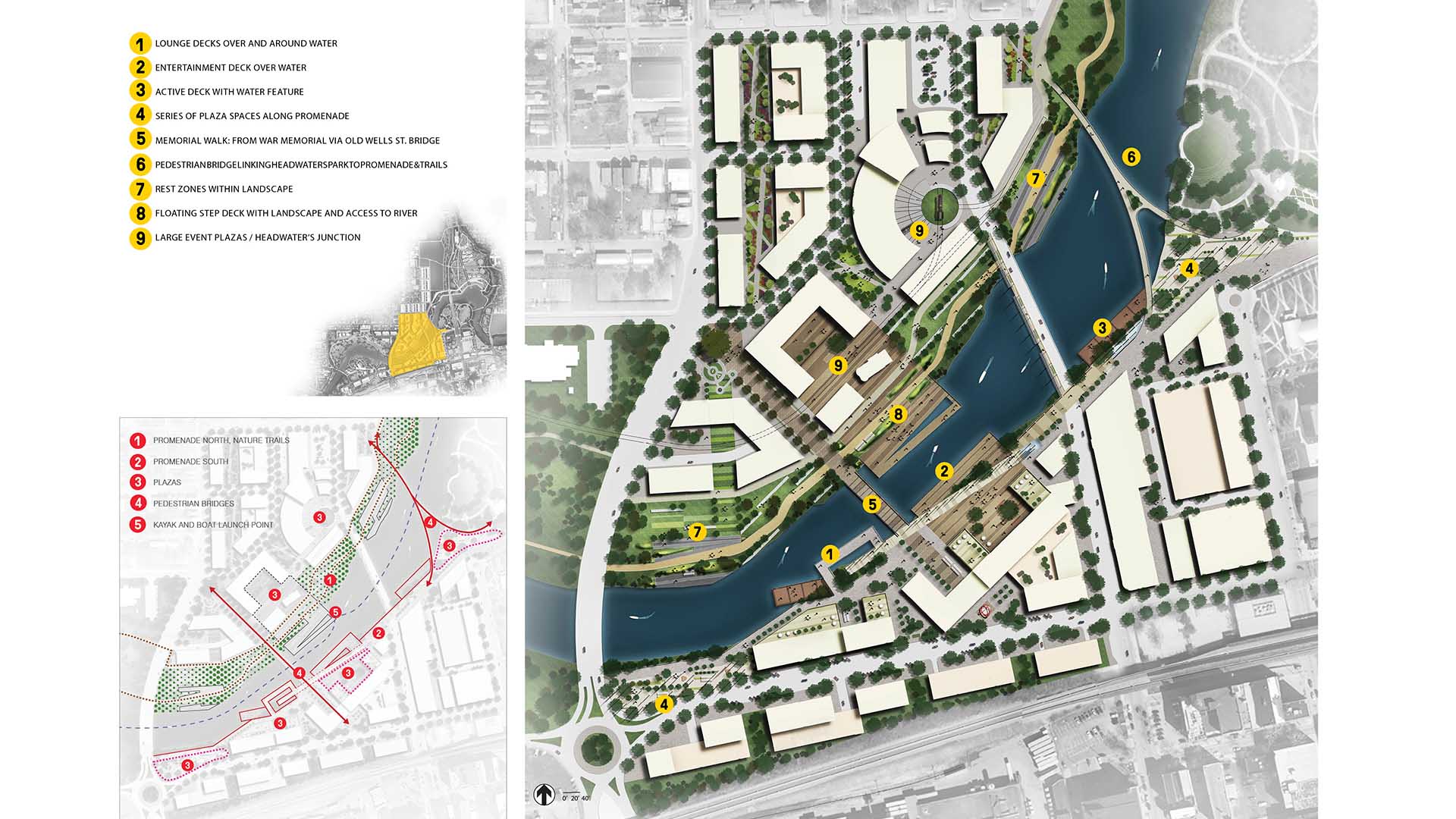 As a city that was built and thrived because of its location as a crossroads between wilderness and city, farm and market, the realities of infrastructure both natural and man-made are at the heart of Fort Wayne’s history. We consider waterways as an integral part of open spaces of the City, forming a series of infrastructural systems that affect the dynamics and spatial characteristics of the region’s natural landscape systems.

Framing the project in this way allows Fort Wayne’s river system to be affected by the City, and the fabric of the City to learn from the rivers. We see this project as a catalyst that will change the urban character of Downtown Fort Wayne by embracing the rivers as an integral part of the urban landscape. A melding of art, landscape, engineering and urban design will create layers of interest, and a rich interplay between natural systems and urban spaces.

At the core of the project is the simple notion that the health of our rivers reflects the health of our society, and that reconnecting Fort Wayne to the river will reawaken an appreciation for the City’s history and ecology. The planning of Fort Wayne’s urban core begins with understanding the river as a necessary and important infrastructural system that has defined the City since its birth in 1832. The rivers of Fort Wayne have moved men and materials, have provided irrigation, and have created a scenic setting for the town. But while the rivers helped to build the town, from time to time they also helped to destroy it with flood waters. Our work and research with the destructive forces of rivers and strong storm occurrences will guide our technical remediation aspect of the project, along with the engineers on our team.

While Fort Wayne has taken considerable steps to create a robust urban core, the pressures of suburbanization must be addressed to maintain a downtown that is fully functioning and attractive to business, residents and visitors. We envision a public realm design that will provide civic beauty, timelessness, and recreational opportunities along with the implementation of modern infrastructures that attract private realm projects that are inspired, robust and “of the place.” The end result will see public and private investment that is culturally and ecologically relevant – a balancing act that only the world’s most sophisticated cities achieve. We understand that the project will incorporate the core values of urban design, sustainability, cultural and environmental preservation, and socioeconomic promotion.

SWA collaborated with the Guangzhou Urban Planning Design & Survey Institute on a new urban design concept for the 2010 Guangzhou Asian Games. Situated between mountains to the North and the Pearl River to the South, Guangzhou has a unique condition, which allows for the use of existing water channels for the framework of a new open space network. By abstract

A new residential tower has risen across the street from the Empire State Building. As a zoning incentive, a new public plaza was included to attract and accommodate the area’s tourists as well as its diverse office and residential neighborhood. The space is defined by a clean, contemporary design composition of spaces, elements and custom furniture meant to fo 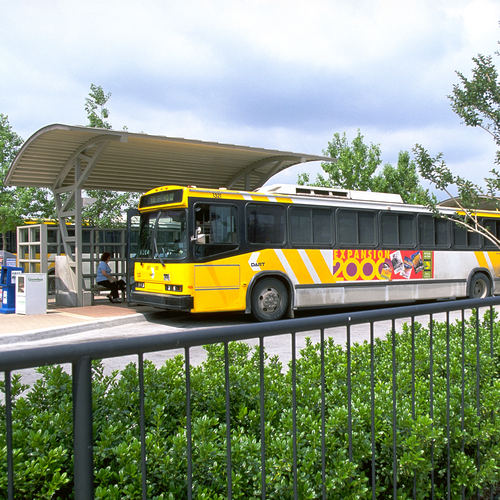 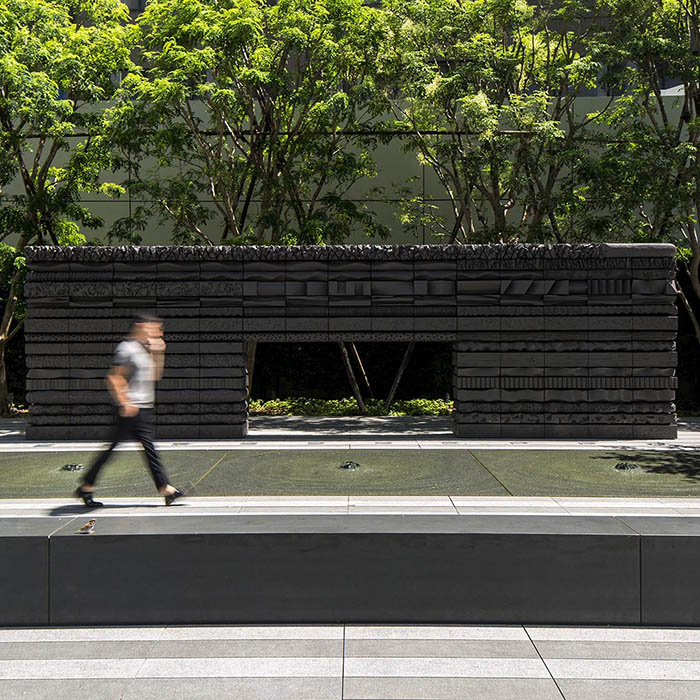 This urban redevelopment project is on the site of the former headquarters of Kajima Construction Corporation. Mid-rise twin towers were replaced with 150-meter-tall high-rise with office space and high-end apartments on the upper floors. SWA designed an entry plaza for the building, while providing much-needed green space in this dense neighborhood in the middle

In the early 1970s, the National Park Service began the enormous task of creating a new national recreation area in the midst of an urban center—the San Francisco Bay Area, home to 4.5 million people at the time. Riding the wake of the environmental revolution of the late 1960s, the Park Service would need to find consensus among a wide range of constituents, ...

Sava Promenada at the Belgrade Waterfront

This one-million-square-meter waterfront development, the single largest regeneration project in Serbia’s history, aims to create a world-class, sustainable destination for civic and cultural attractions, forging human and physical connections to the Sava River where none existed before. Located near the historic town center of Belgrade, the site’s...

Hunter’s Point South Waterfront Park was envisioned as an international model of urban ecology and a world laboratory for innovative sustainable thinking. The project is a collaboration between Thomas Balsley Associates and WEISS/MANFREDI for the open space and park design with ARUP as the prime consultant and infrastructure designer.

The latest step in the renaissance of Downtown Dallas has arrived with Pacific Plaza, a 3.89-acre public park that serves the central business district’s burgeoning population and contributes substantially to the city’s outdoor experience. The first of an ambitious four-park initiative, Pacific Plaza complements adjacent urban greenspace with a varied program ...