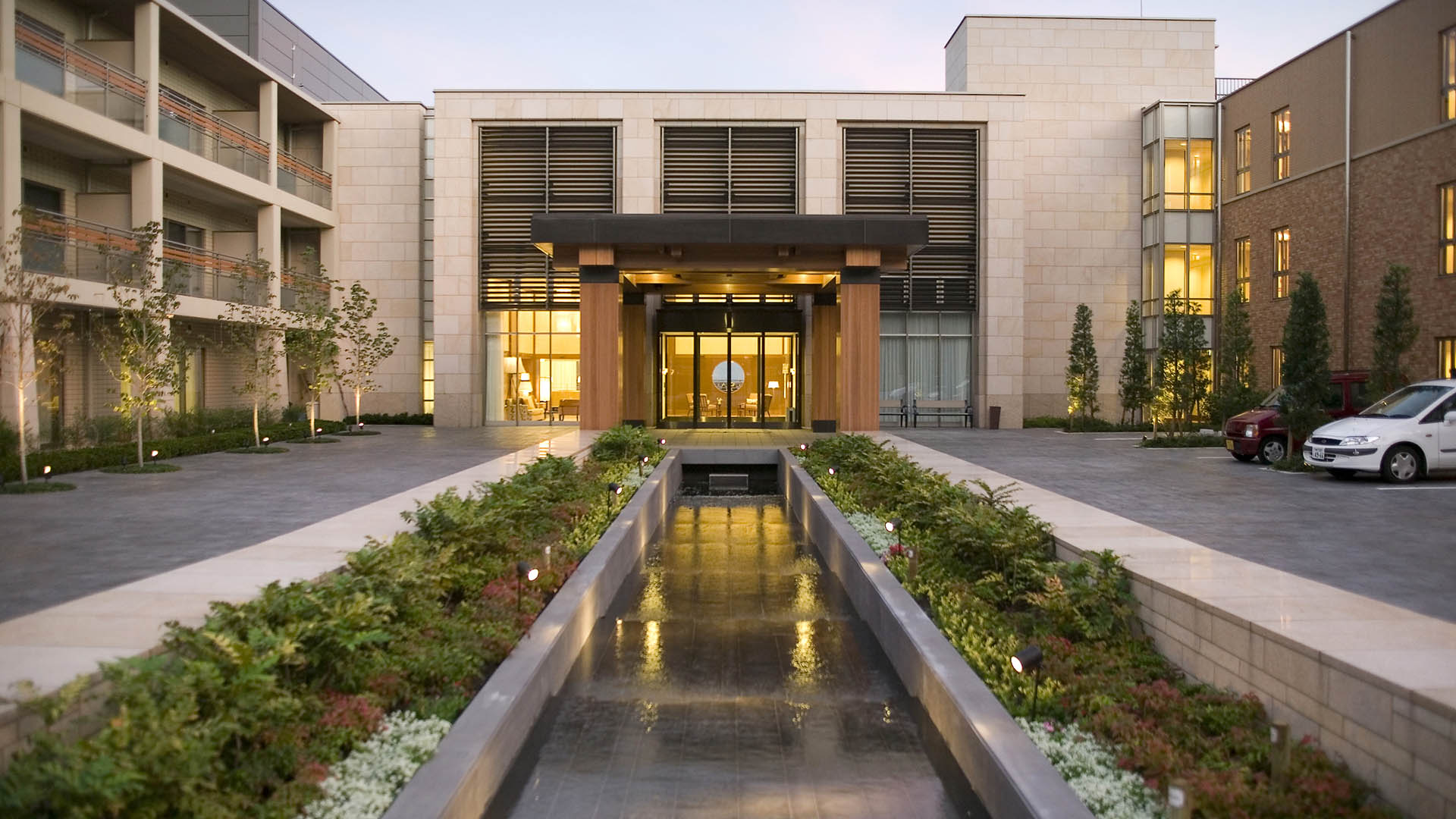 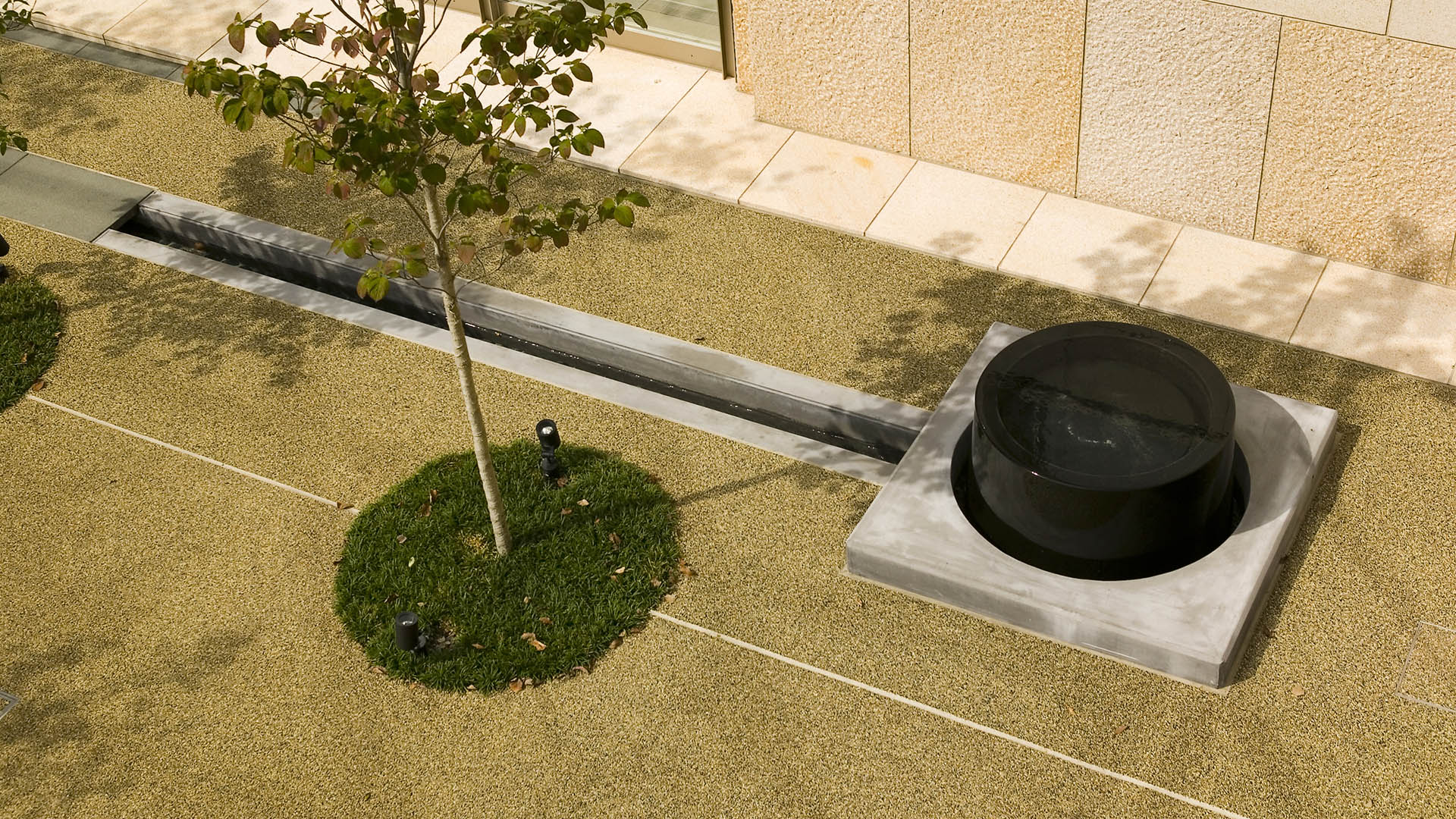 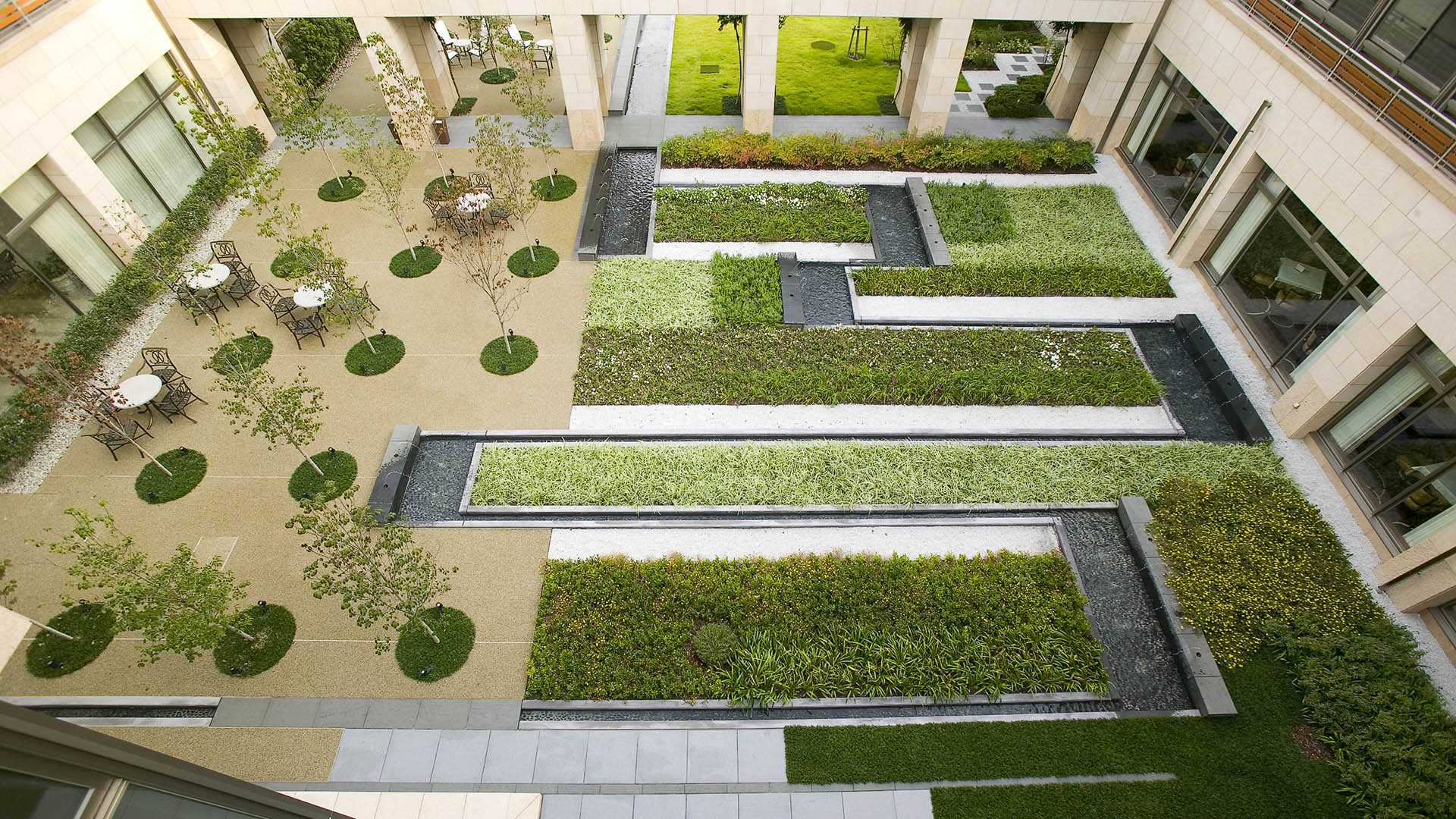 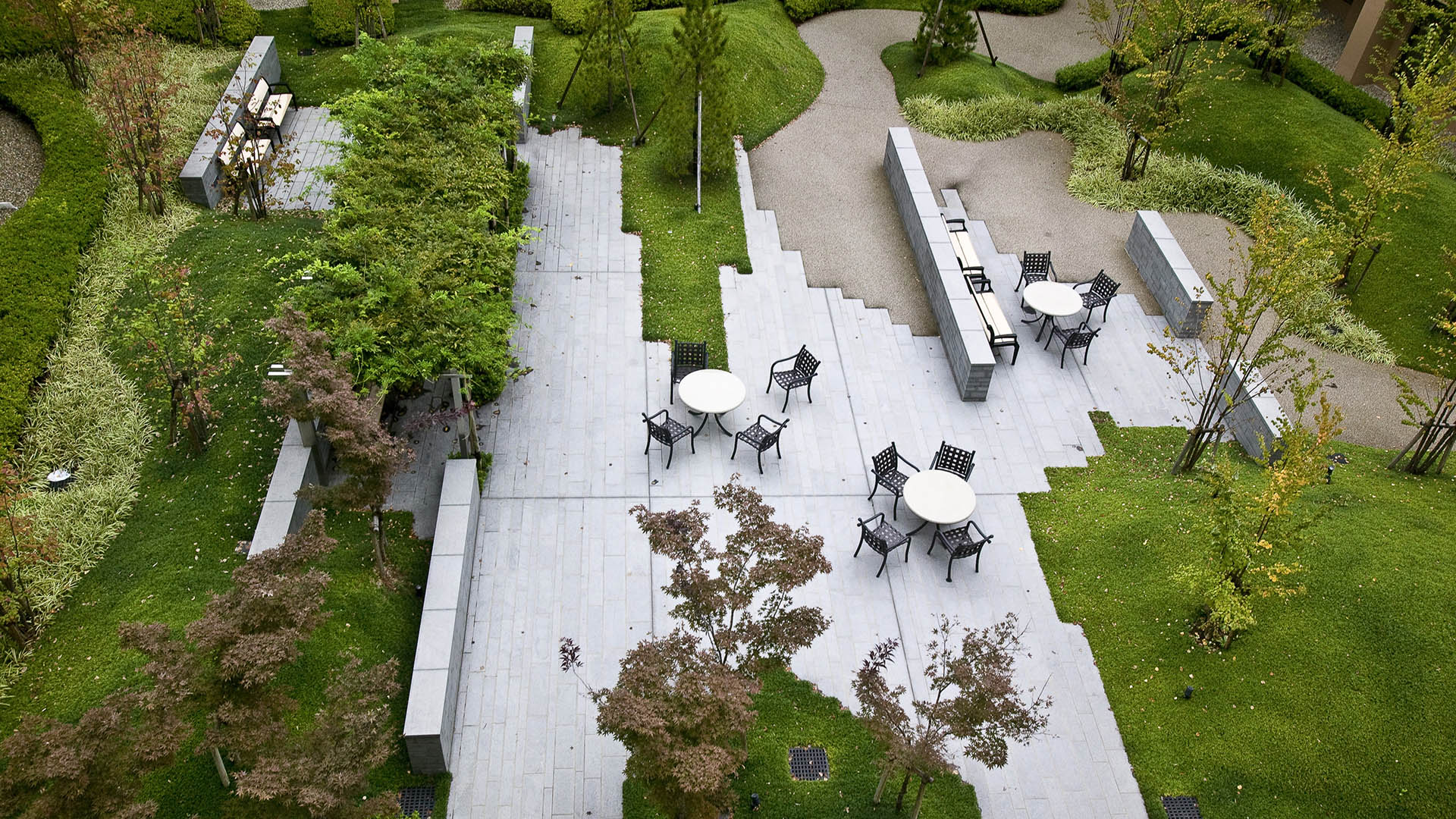 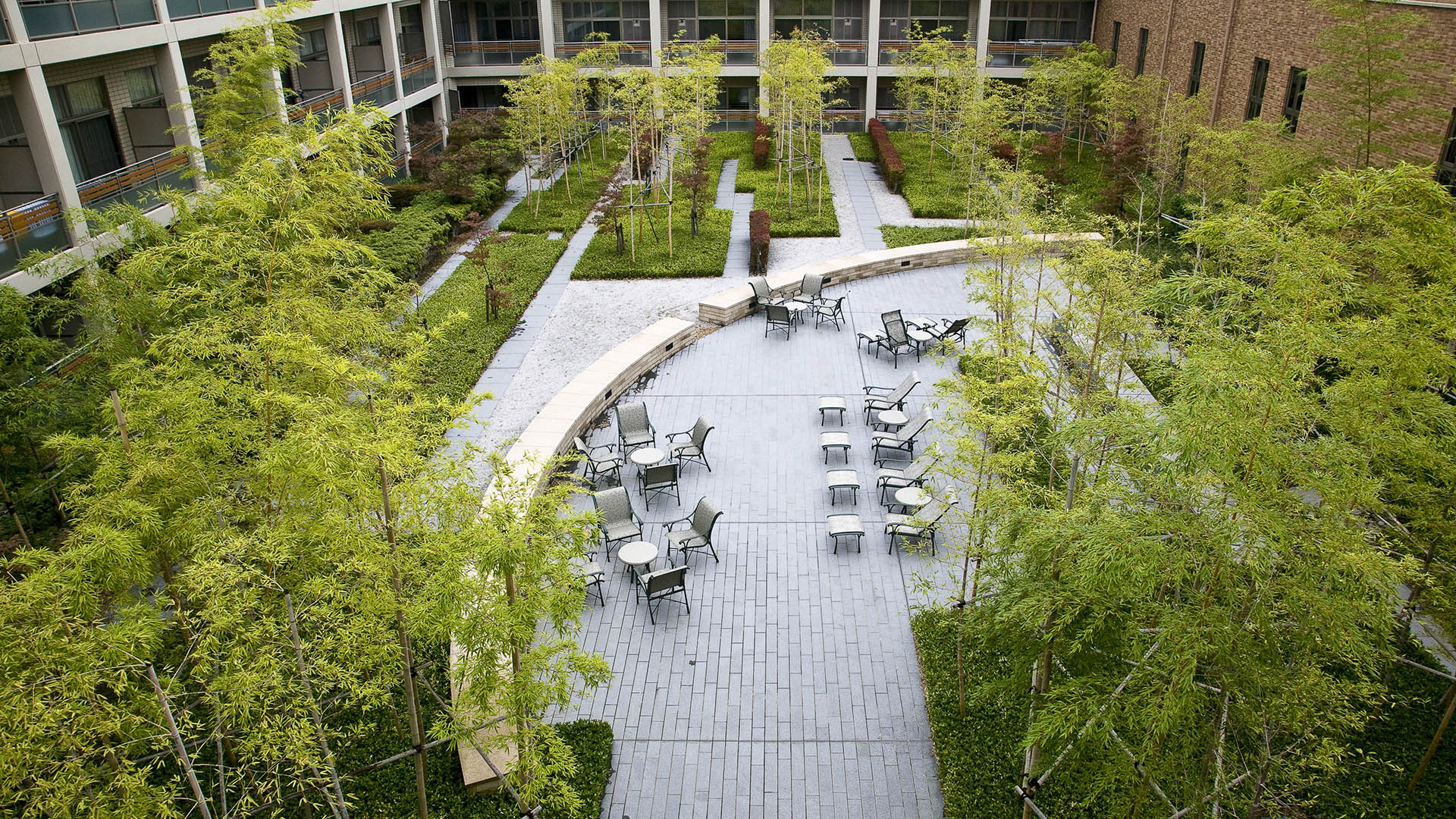 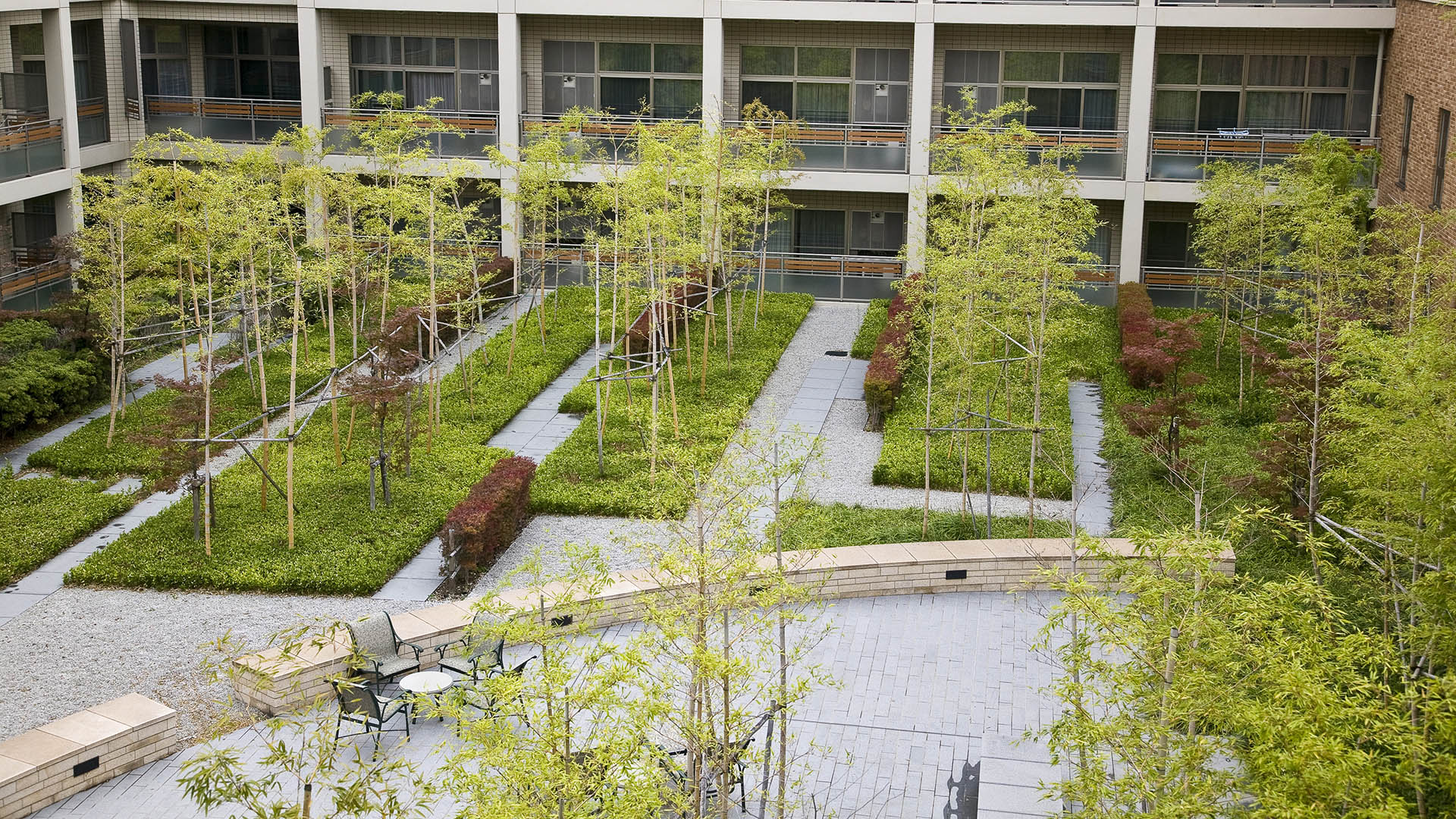 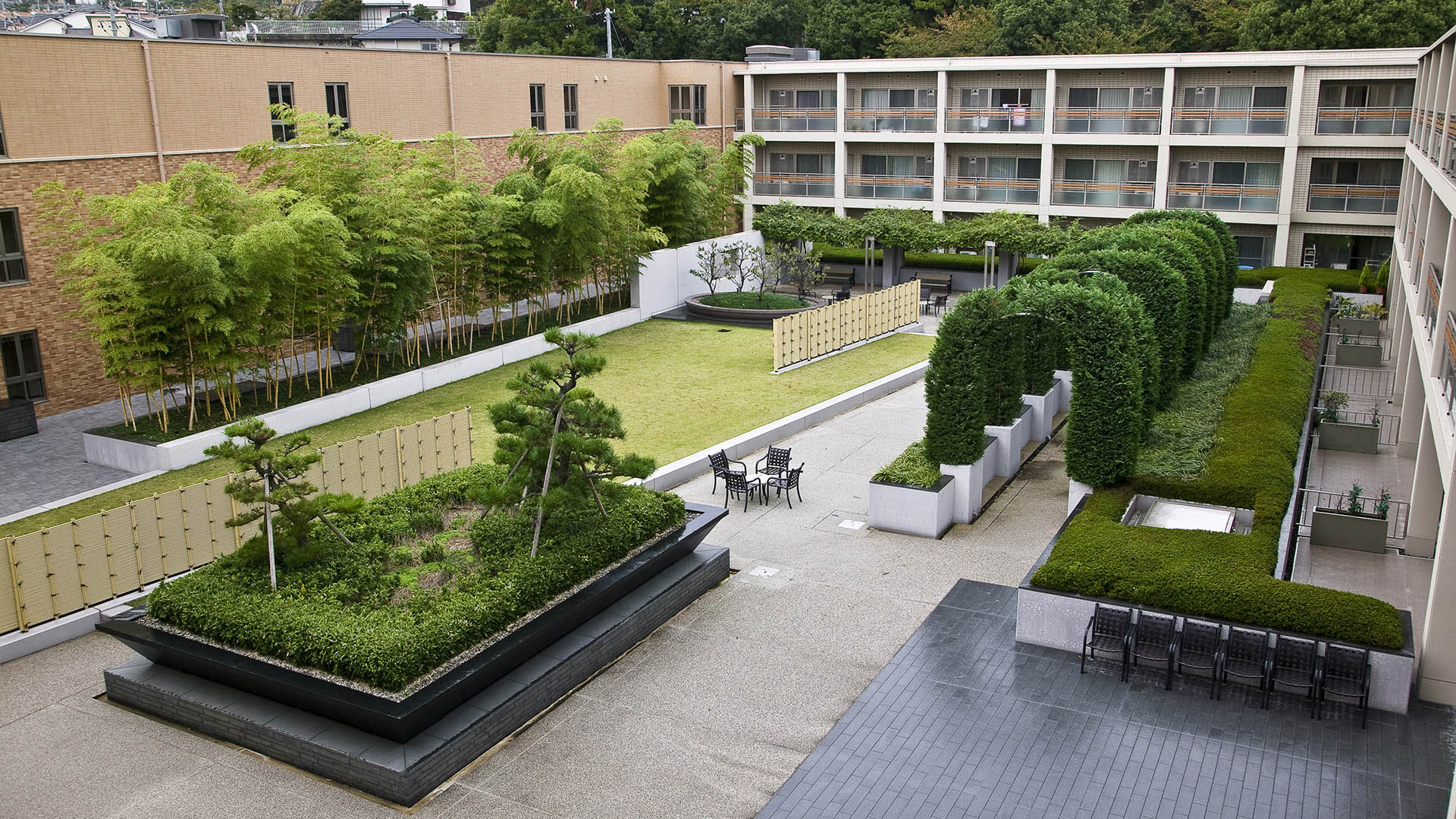 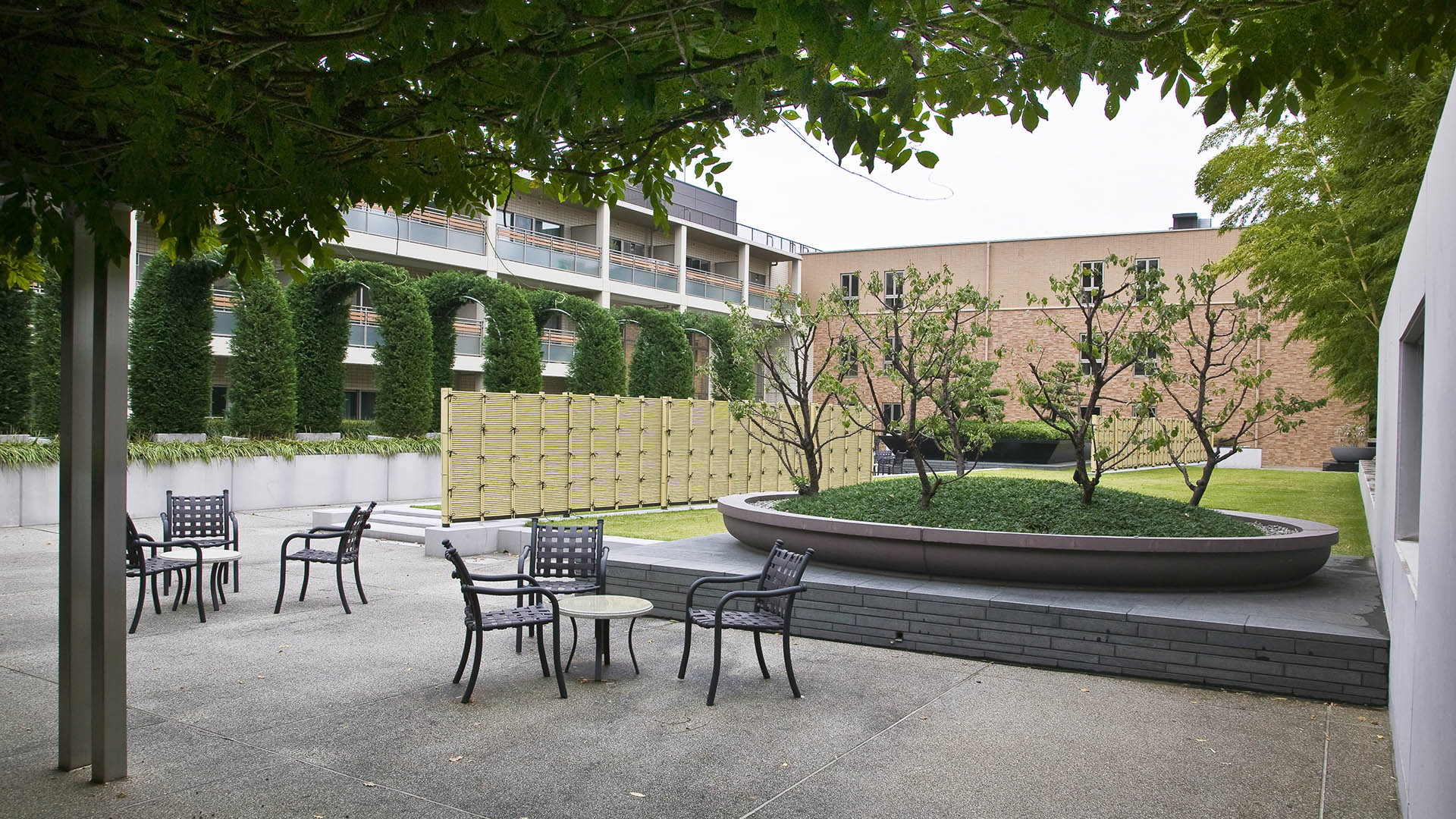 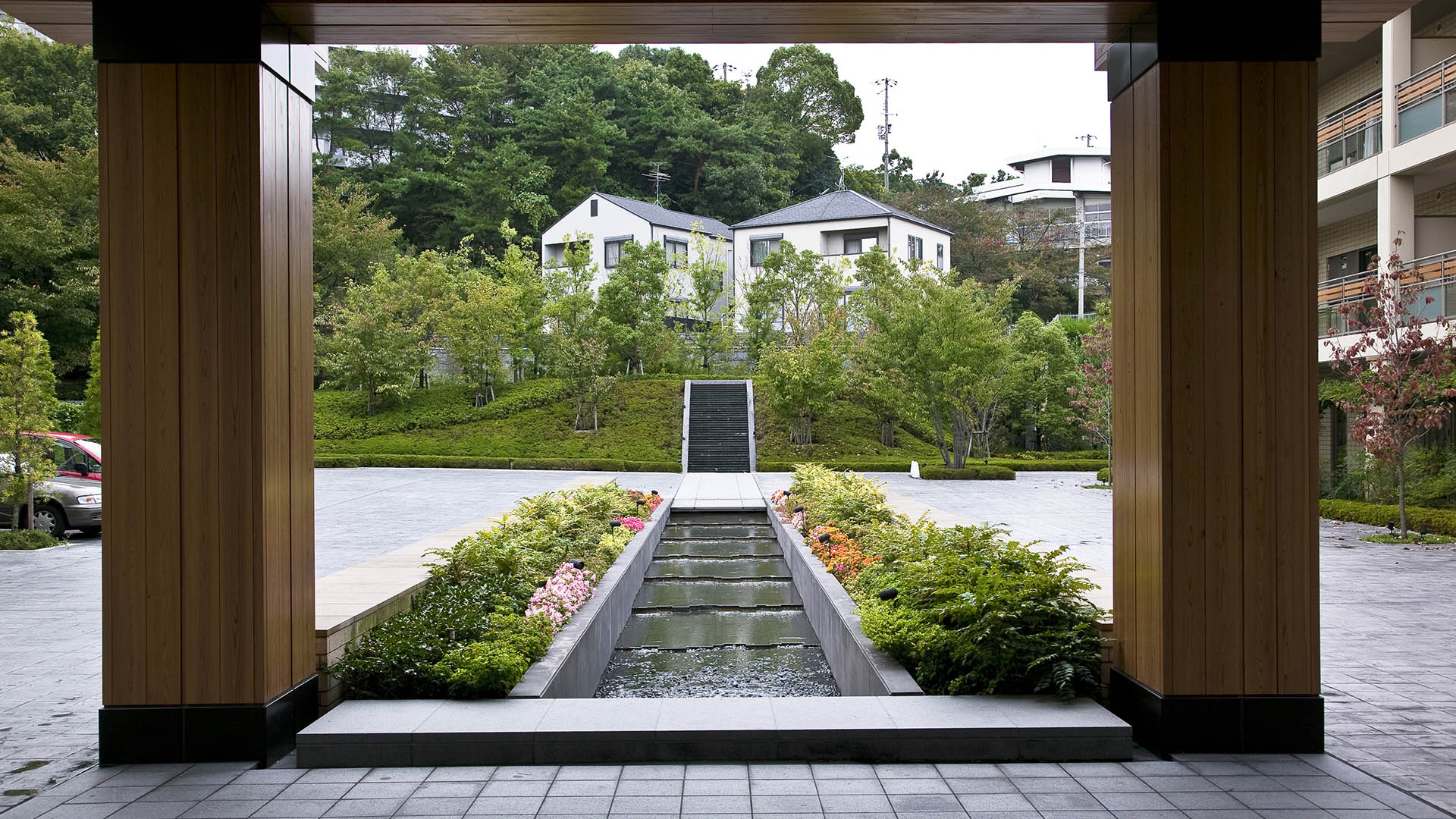 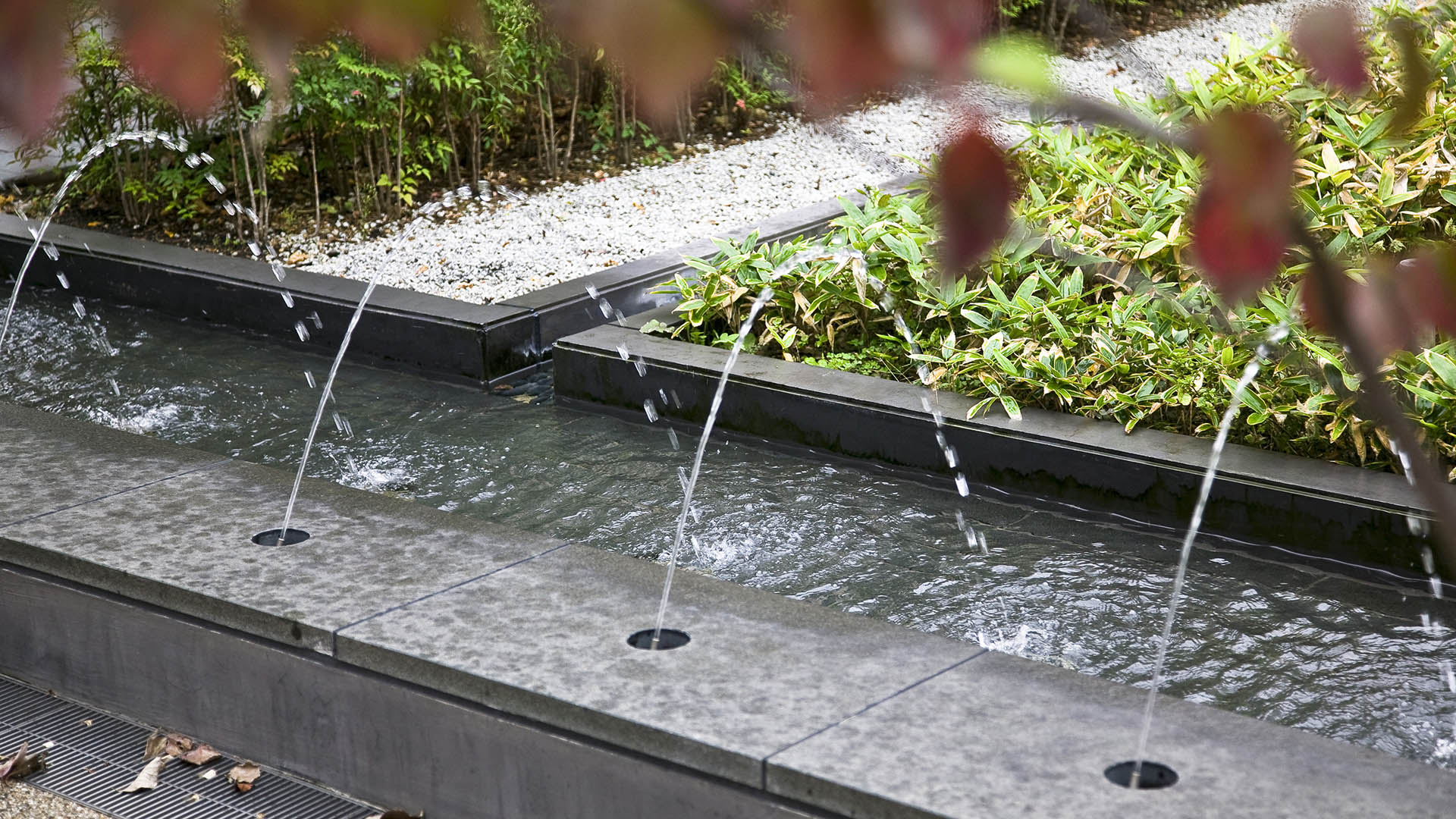 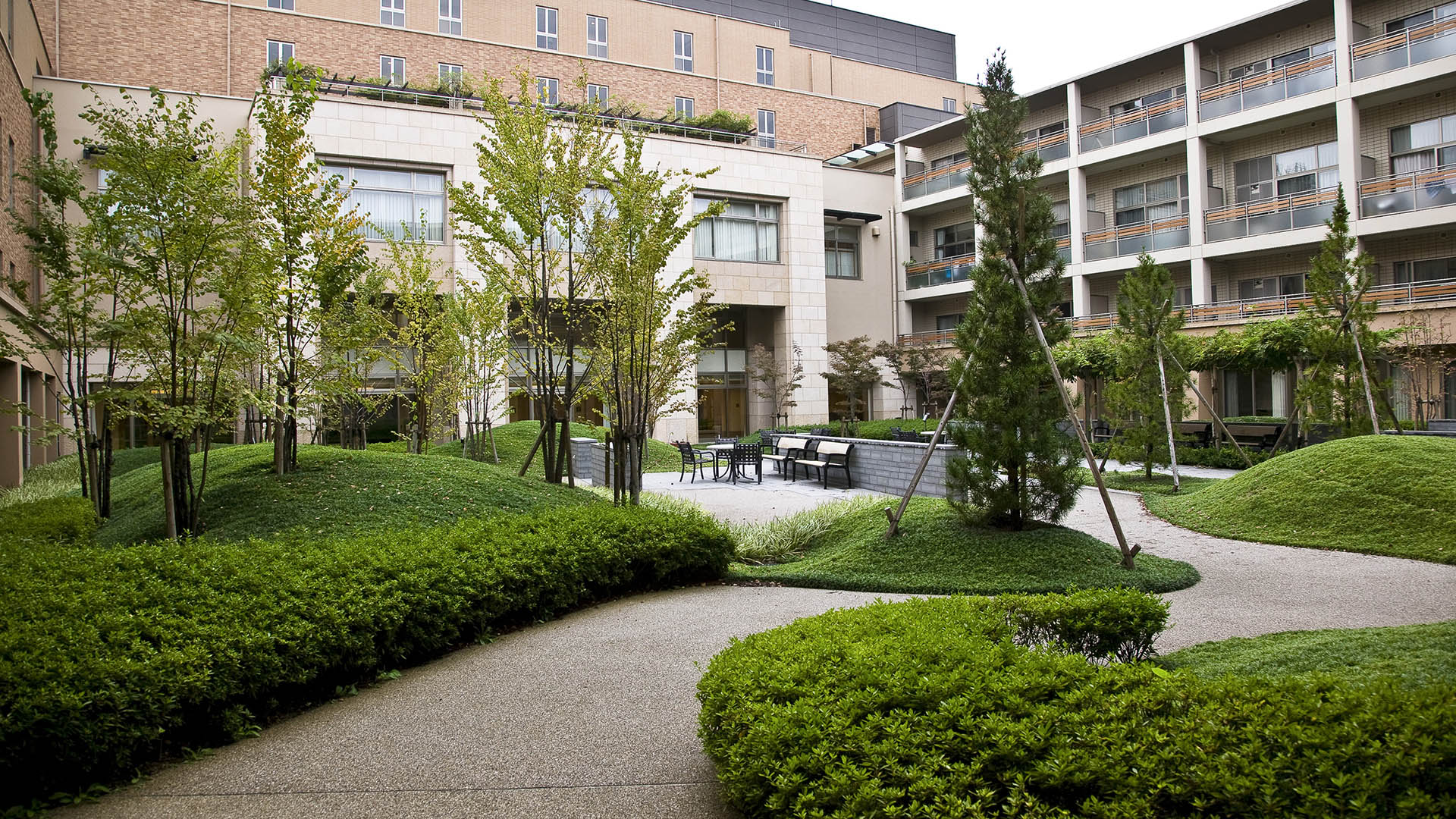 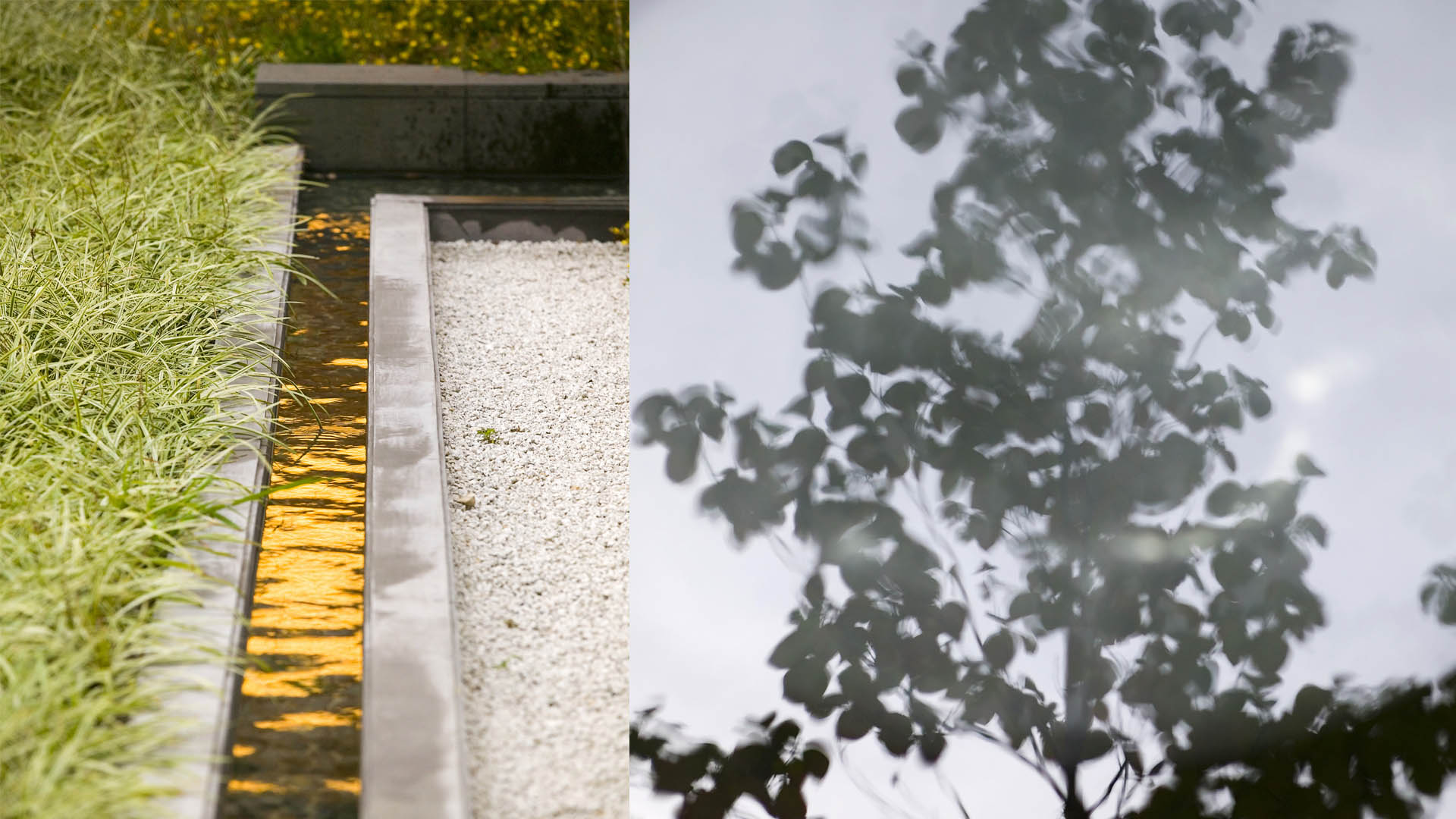 Located in a bedroom community midway between Osaka and Kyoto, this facility has both Assisted Living and Skilled Nursing levels of care. The landscape design, complementing the modernist architecture, is organic and fluid with meandering paths traversing various gardens on the south side of the building connecting feature terraces located at each end of the b...

This mixed-use planned community of over 6,000 people features over 2,000 dwellings in a broad mix of single family detached dwellings, and over 500 multifamily dwellings, complemented by a retail center and 800,000 square feet of flexible development. . Prominent natural landforms such as the Southern Ridge and the three knolls have been preserved and incorpo...

Toyon Hall, a significant historic building originally designed by Bakewell and Brown Architects in 1922, is a three-story structure centered around a magnificent formal courtyard with arcades and arches. The purpose of the project was to preserve, maintain and enhance the building and site. SWA scope of work included evaluation of existing site conditions and...

Branner Hall is a three-story undergraduate dormitory built in 1924 by Bakewell and Brown, prominent architects of the time who were also responsible for San Francisco’s City Hall. The renovation design creates two significant courtyards: an entrance courtyard flanked with four-decades-old magnolia trees shading a seating area and an interior courtyard with a ...

Next C Water City is a new, fully self-contained sustainable city planned for 500,000 residents. Water was central to the Next C planning concept, supplied by two adjacent rivers and monsoon rains. The city is a system of wetlands, rivers, lakes, and canals, cleansing the water from up-river communities and managing floods during the monsoon season. Working wi...

SWA worked closely with the client and architect in siting the house to maximize views and preserve opportunities in which to develop the landscape. The varied program for the landscape included a small family vineyard, a multi-use field, flower gardens, fountains, terraces, a koi pond, swimming pool and spa, tennis courts, courtyards, a heli-pad and guest par...


Located within El Pueblo, the birthplace of Los Angeles, La Plaza Cultura Village is a mixed-use, transit-oriented development totaling 425,000 square feet of retail, apartments (20 percent of which are low income units), cultural facilities, and public open space. Two large, surface parking lots have been transformed into a vibrant community that builds upon ...

SWA was hired to help reclaim an abandoned quarry into an attractive residential village. The program called for 256du on 12.5 net acres, a density of 2.5 du/acre. The City of Larkspur required that 97 of the total units be family units. They defined family units as residences with two or more bedrooms and located not more than one level above grade. The City ...