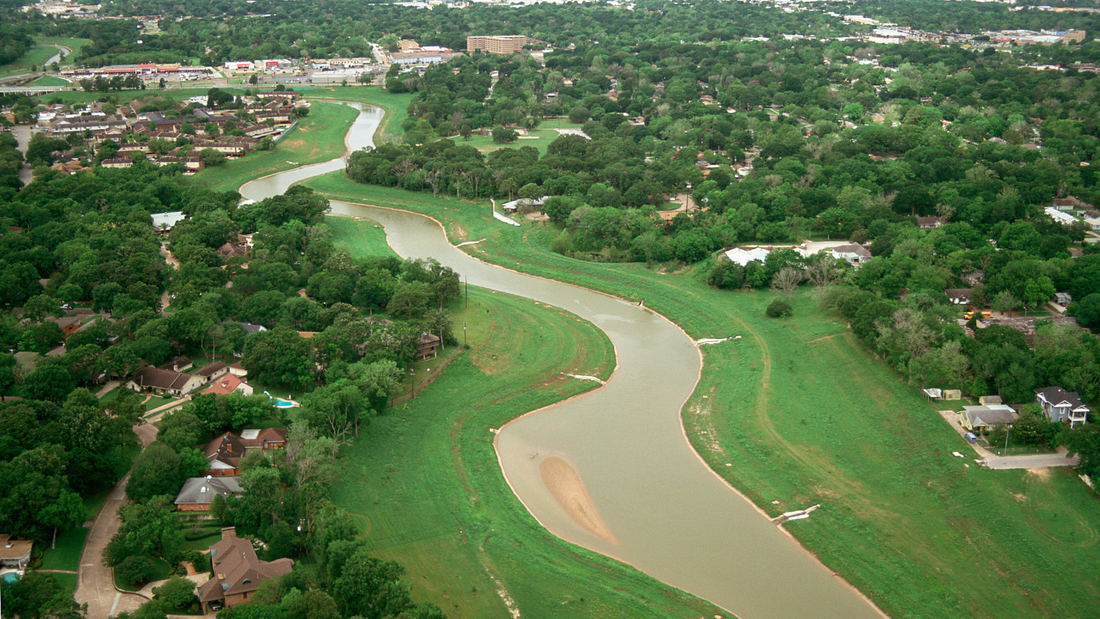 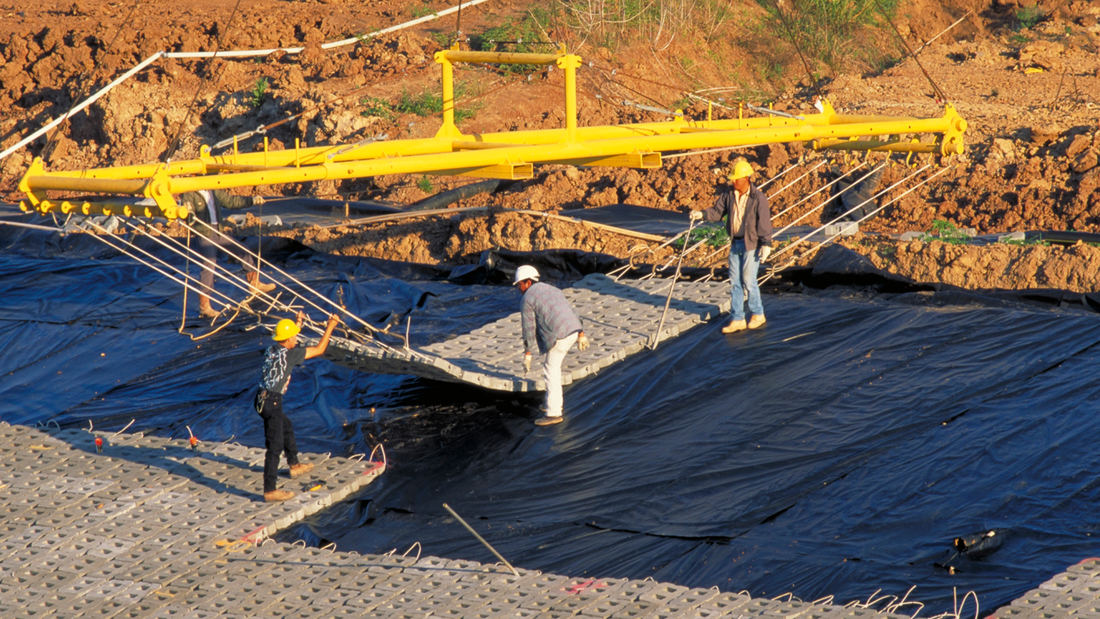 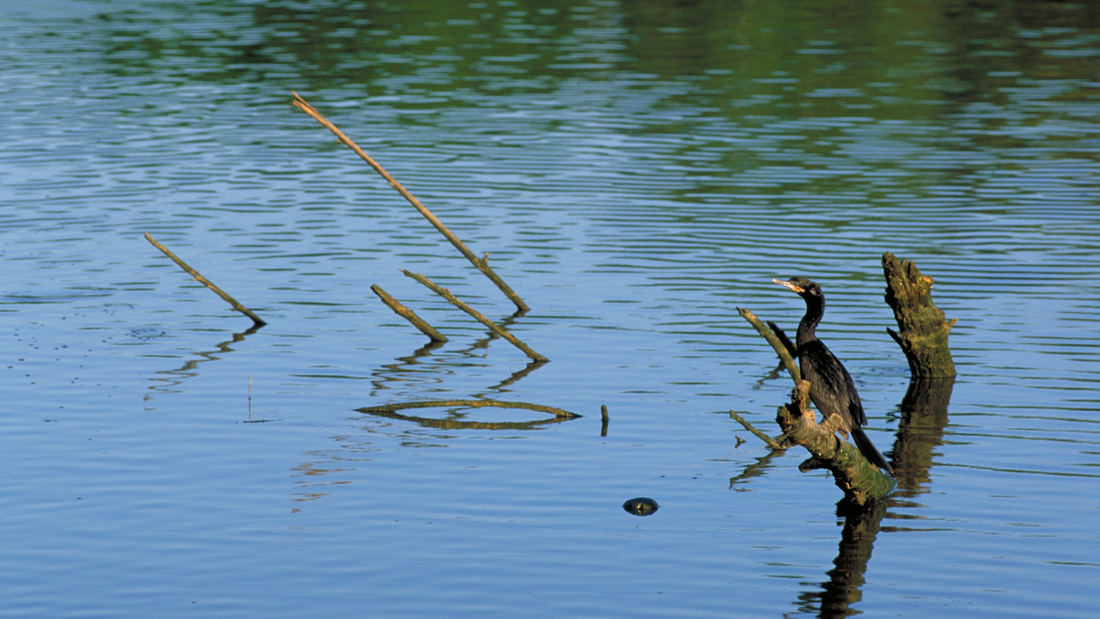 The story of Sims Bayou is based on a large vision. The project is the first step in implementing a long-range plan for watershed greenbelts in the Houston region, a comprehensive system which addresses the potential for parks, wildlife habitat, and economic real estate revitalization while also controlling flooding. The Sims Bayou project has profoundly changed the way the US Army Corps of Engineers (USCOE) and the local flood control district will work with the community in the future. Beyond that, it sets the stage for far-reaching change within the City of Houston. Sims Bayou is a twenty mile-long stream in Houston that was slated to be channelized as part of a 1940’s USCOE storm drainage master plan. Over time, housing subdivisions had replaced agricultural and pasture land in the 100-year flood plain. To prevent recurrent major flooding, the USCOE proposed widening and straightening the variable 50- to 100-foot wide stream to a consistent 300-foot wide solid concrete channel. In the 1980’s when the $400 million project was about to bid, members of the downstream community formed a coalition to fight the destruction of the tree-lined bayou that threaded through their neighborhoods. At the same time, the economically depressed neighborhoods in the middle portion of the bayou, where the worst flooding occurred, desperately needed a solution. Charges of environmental racism surfaced. The district’s US Congressman Mike Andrews intervened and asked the landscape architect to help break the impasse.

For several years, SWA had advocated a 200-year planning framework for the region’s urban rivers and waterways, known as bayous. Applying that vision to Sims Bayou, the designer worked, largely pro bono, to develop a creative compromise to the problem that neither engineers, politicians or local agencies had been able to solve. The landscape architect asked both the engineers and the neighborhood coalition to view conditions along Sims Bayous in the context of 200 years of watershed change. To the surprise of the engineers, the landscape architect proposed using the full width of the right-of-way to make the channel even wider than the proposed 300 feet, thereby slowing down the flow of water and protecting against erosion. In place of a trapezoidal cross section, the landscape architect proposed mimicking nature with a small bottom stream to handle annual flows and a series of gradually sloping embankments and flood benches to handle greater flows. Trees planted in the flood benches also were proposed to encourage diverse habitat, reduce maintenance, and to add to the visual presence of the bayou. The neighborhood coalition was asked to see the bayou as a river constantly moving and reshaping itself and to recognize that the coastal tree species growing along its banks were short-lived and, over time, would continually regenerate. The solution – a sinuous, varying-width earthen channel – required more grading than the original proposal, but cost less than pouring large amounts of concrete.

Although the USCOE would not allow the full extent of the proposed planting, Sims Bayou marked the first time that trees were replanted within the actual floodway. After many severe rainstorms, there has been no flooding along the newly configured bayou. The success of Sims Bayou has led both professionals and residents to seek more innovative solutions to flood management.


Over many decades, public agencies in China have sought to solve growing flooding issues in a defensive way: fortifying and hardening river edges, raising levee heights, and ultimately separating the people from historical connections to the water. With an understanding of river flow processes and volumes and of wetland and native forest ecology, this separati...

One of the most prominent examples of redirecting the environmental legacy of a post-industrial landscape can be traced to the south banks of the Lehigh Canal, in the city of Bethlehem, Pennsylvania. Comprising 1,800 acres (20 of which belong to this project) and 20 percent of Bethlehem’s total land mass is the former headquarters of Bethlehem Steel Corporatio...

The Clear Lake City Water Authority (CLCWA) identified the increased needs for water detention due to the development increase in this area and bought an unprofitable golf course in 2005. SWA was engaged to design and master-plan the effort’s detention pond. The plan’s goals included flood mitigation and water quality improvements, along with the establi...


Over many decades, public agencies in China have sought to solve growing flooding issues in a defensive way: fortifying and hardening river edges, raising levee heights, and ultimately separating the people from historical connections to the water. With an understanding of river flow processes and volumes and of wetland and native forest ecology, this separati...

SWA prepared a land use and urban design plan for six miles of waterfront adjacent to downtown Long Beach. Through a series of meetings with local community stakeholders, we were able to determine the different needs of each district in the plan: of critical importance was the need to preserve valuable open space inland, and to maintain an ecological corridor ...

Situated just across the bay from Hong Kong, the city of Shenzhen has transformed from a small fishing town of 30,000 to a booming city of over 10 million people in 40 years – and has grown over 200 times its original size since 1980. Along the way, the character of Shenzhen’s bayfront was radically altered. Over 65 km2 of marsh and shallow bay were filled to ...