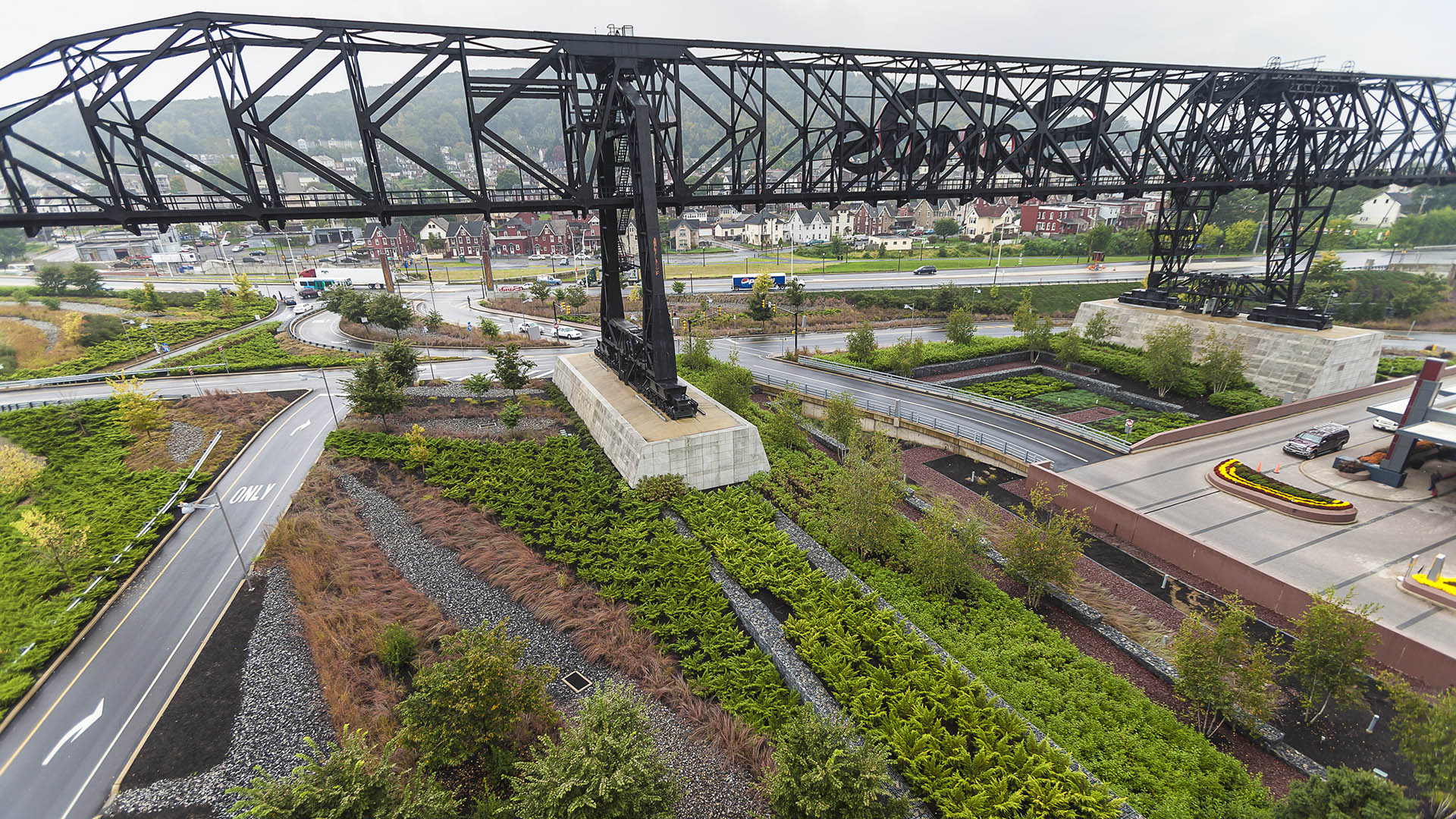 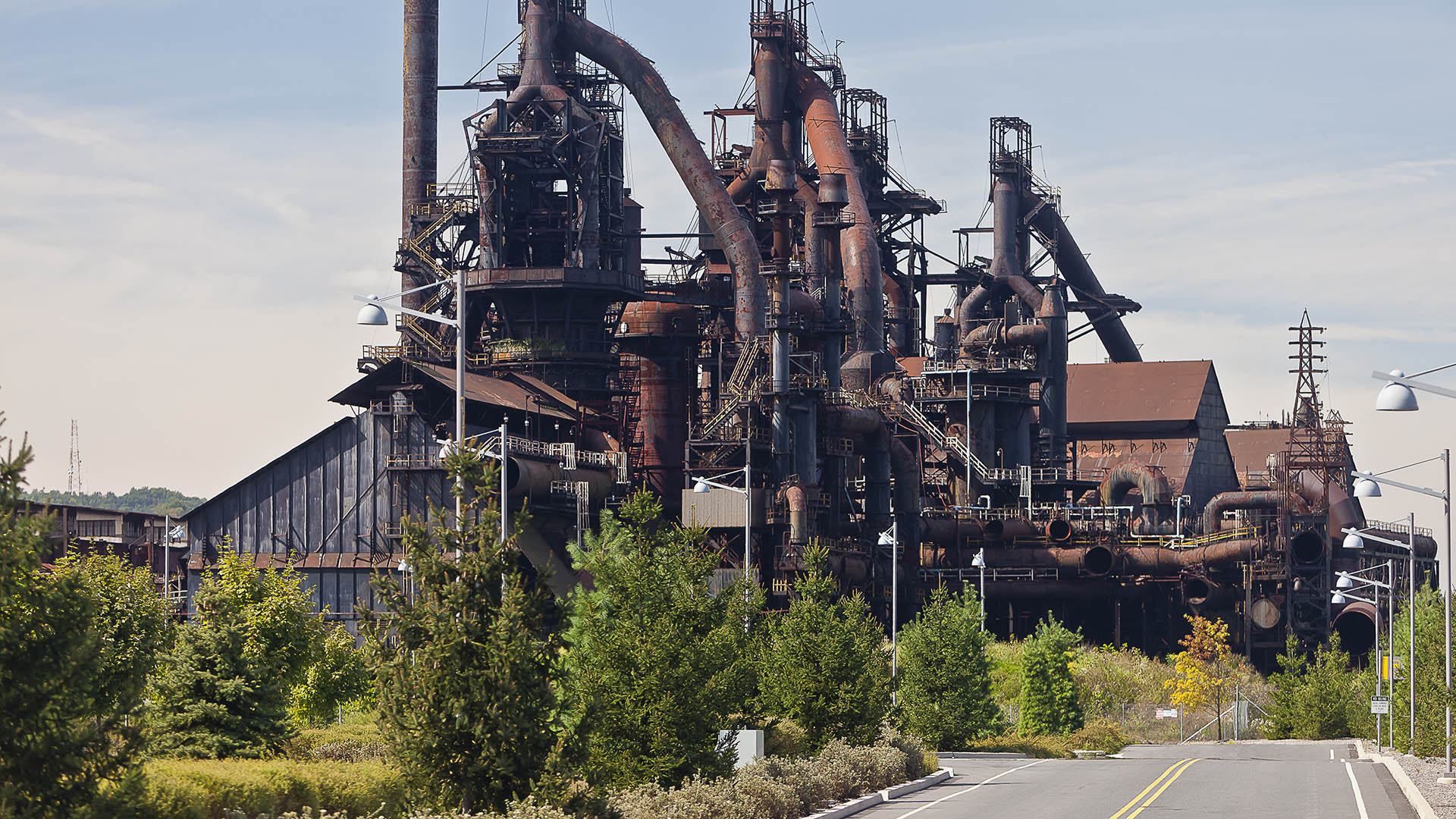 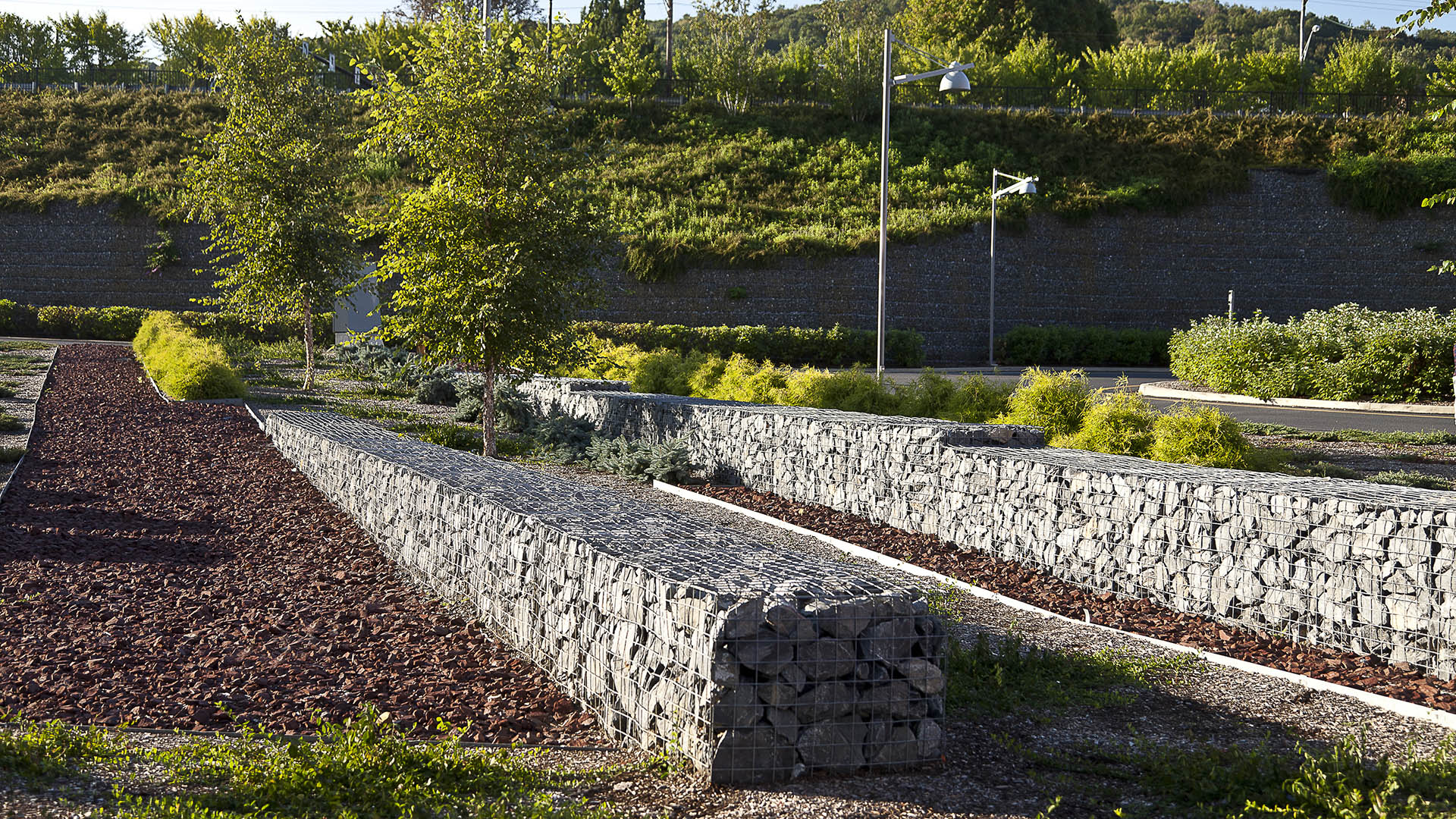 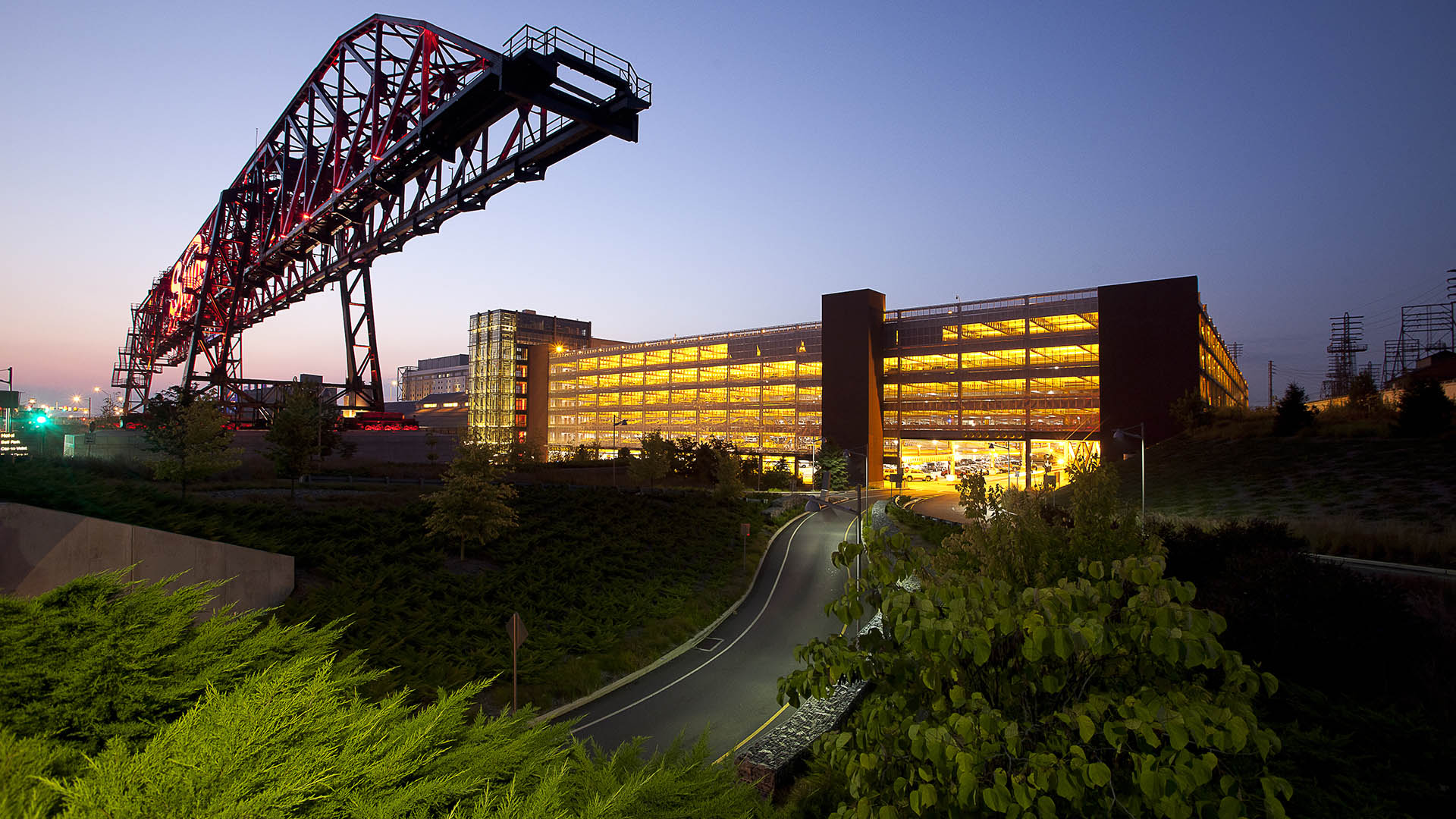 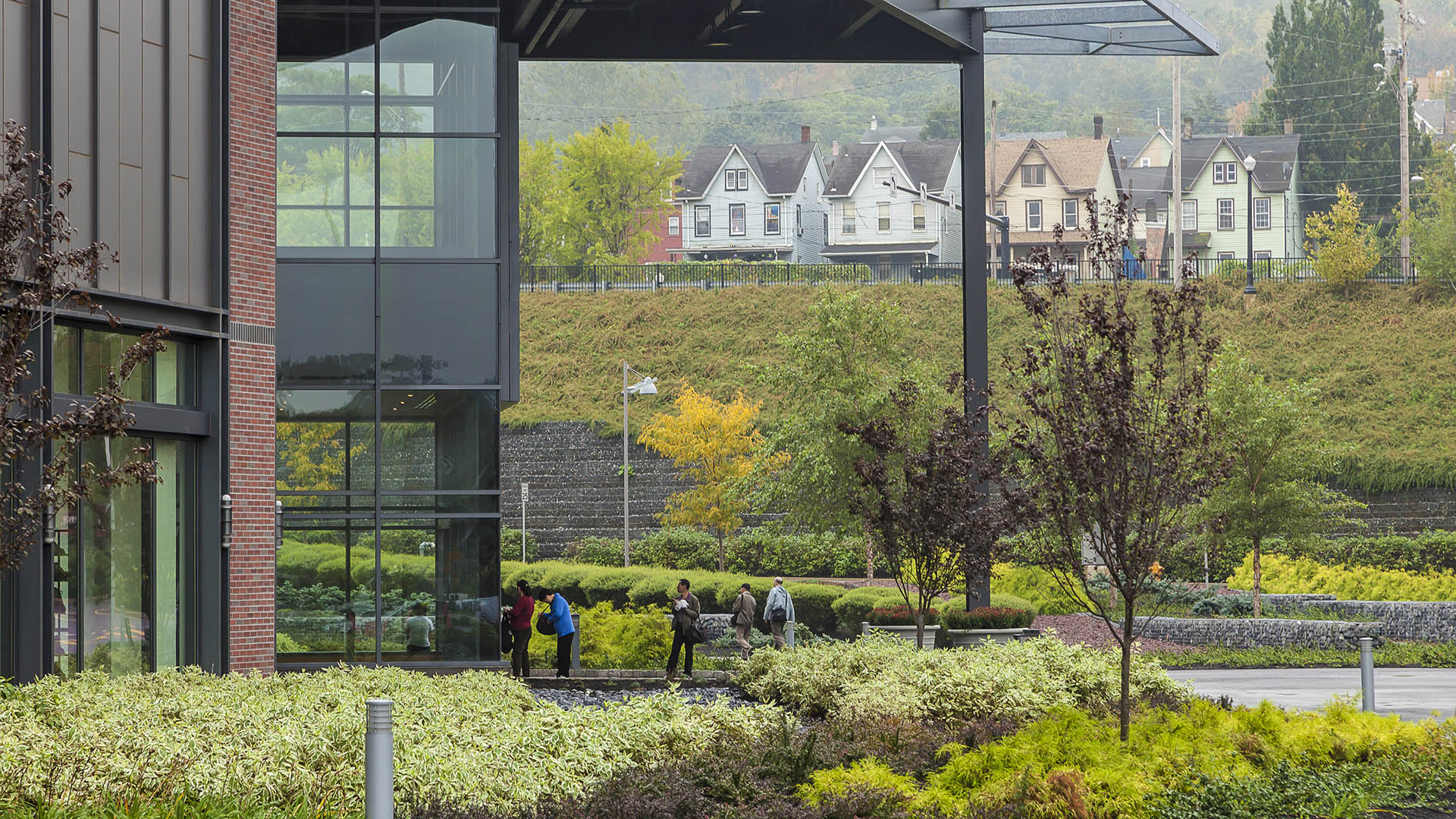 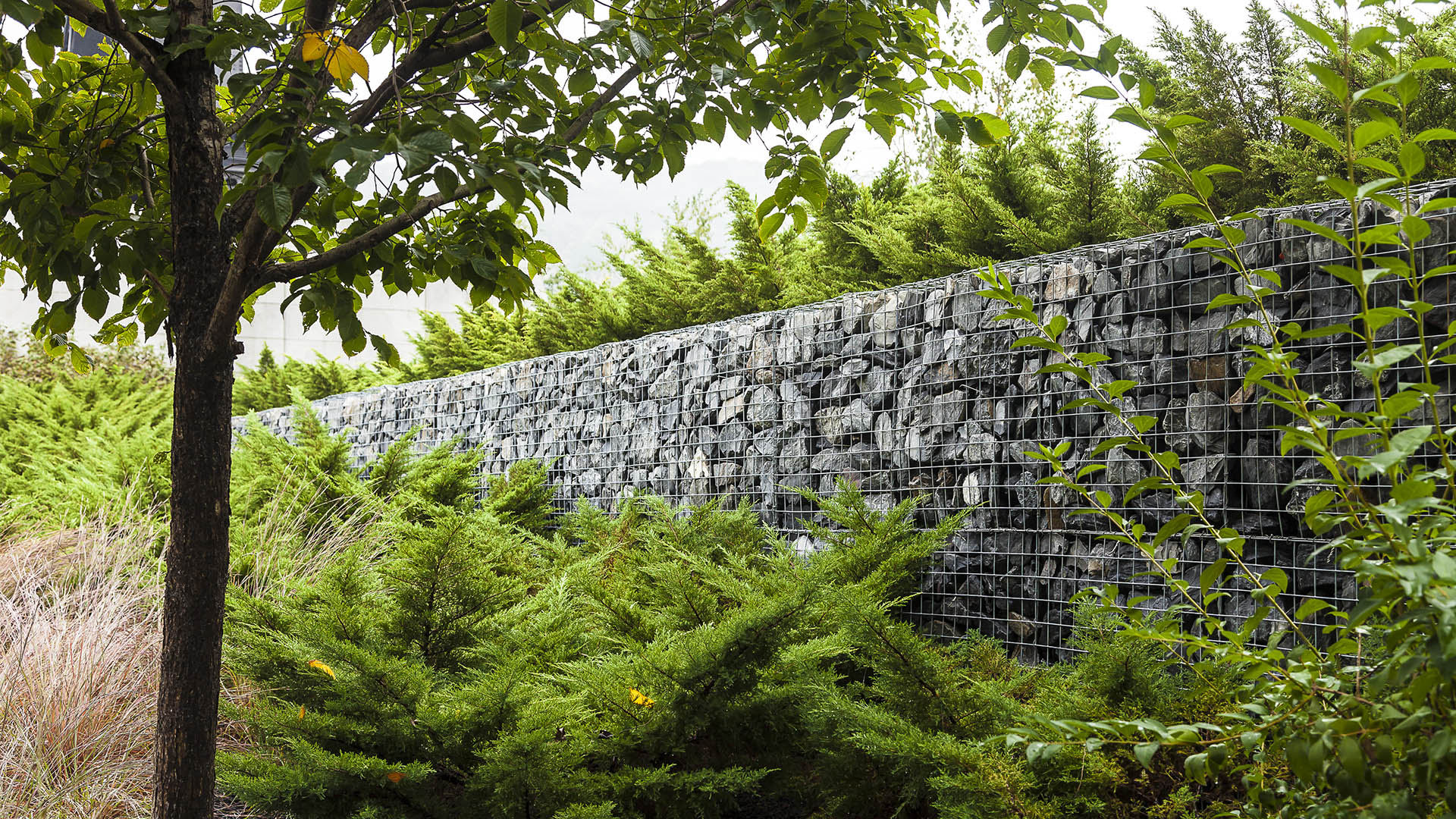 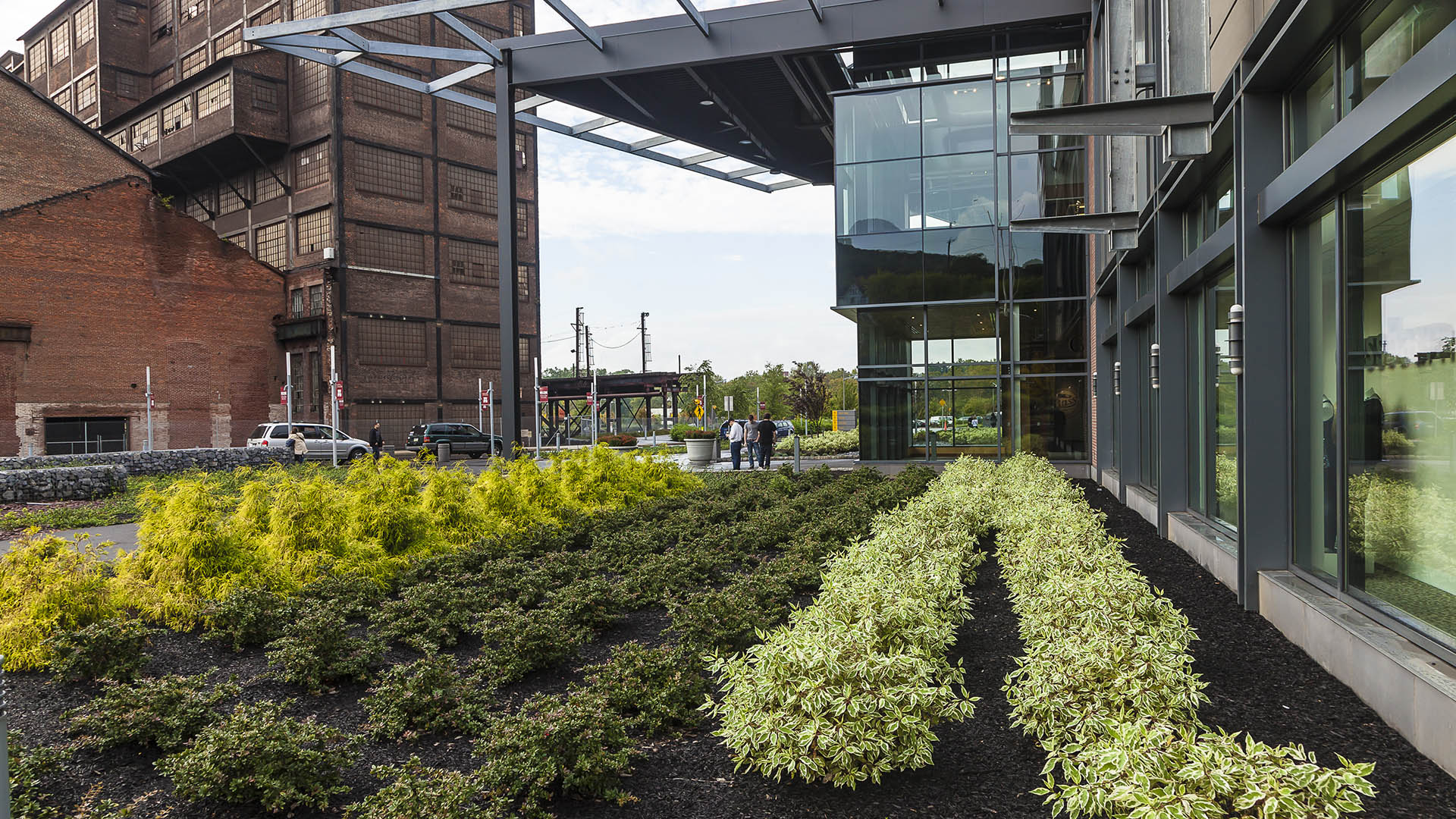 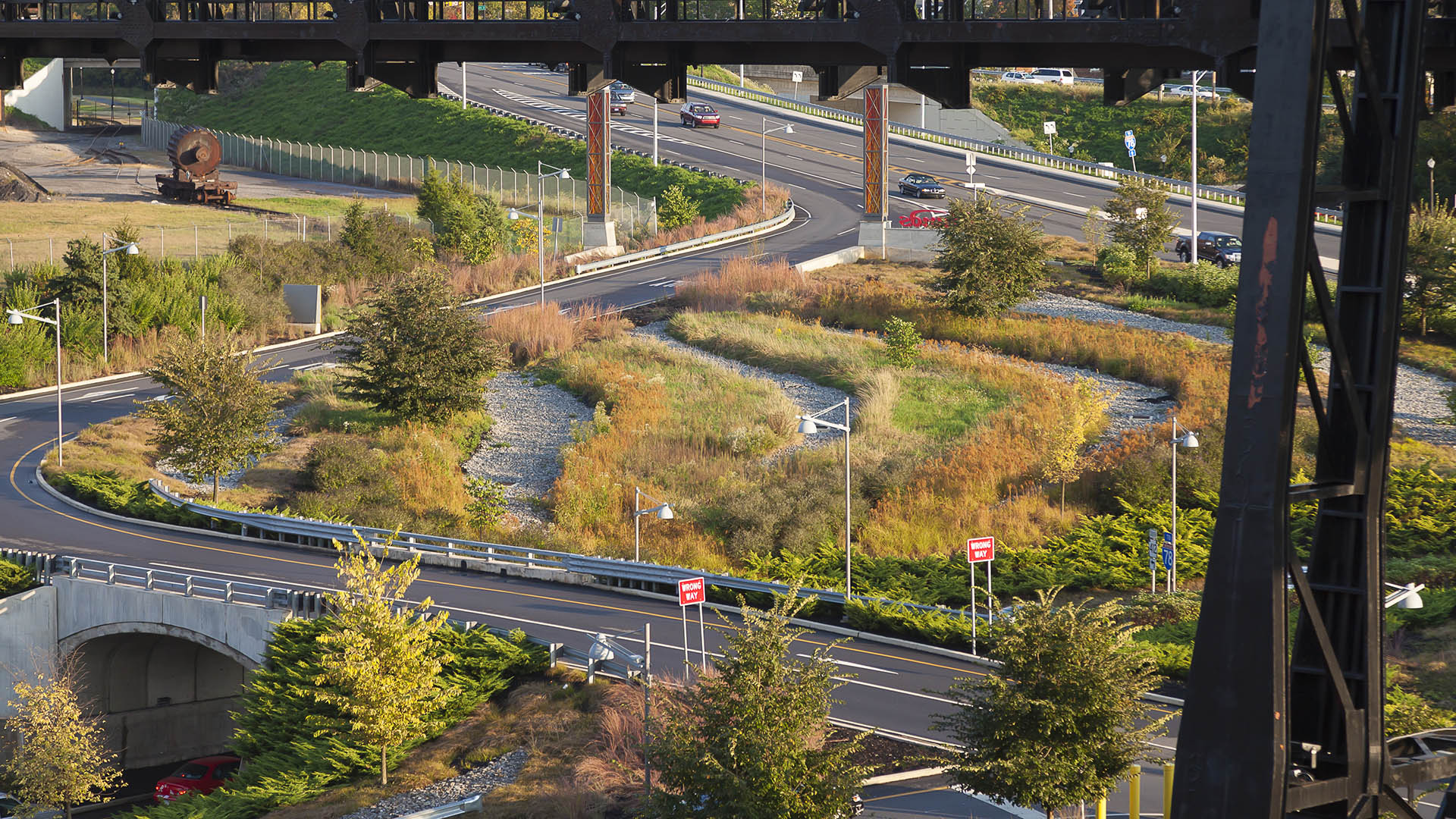 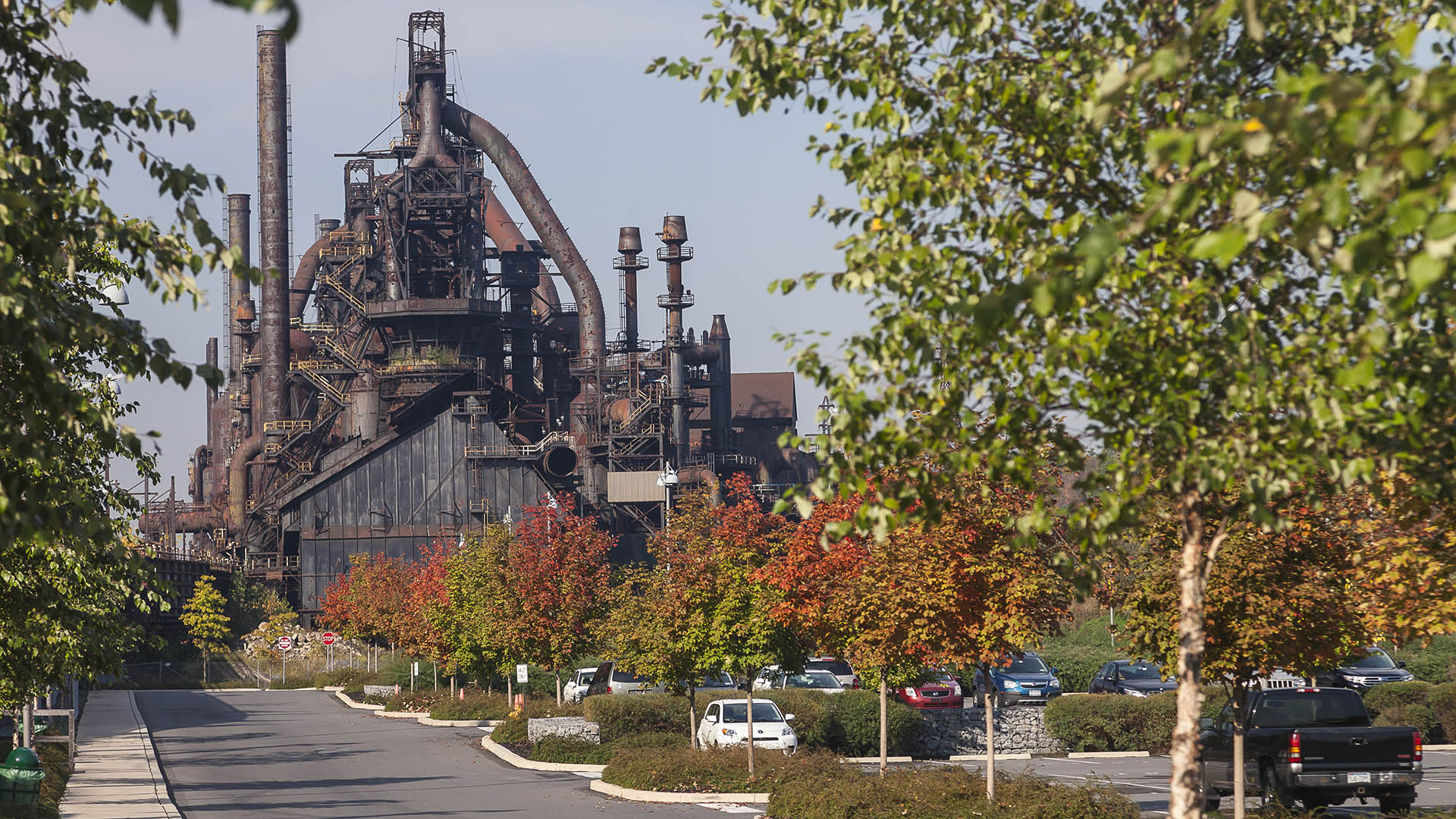 One of the most prominent examples of redirecting the environmental legacy of a post-industrial landscape can be traced to the south banks of the Lehigh Canal, in the city of Bethlehem, Pennsylvania. Comprising 1,800 acres (20 of which belong to this project) and 20 percent of Bethlehem’s total land mass is the former headquarters of Bethlehem Steel Corporation (BSC). Founded in 1904, the company continued to operate until 1998, when US manufacturing divestment, foreign competition, and short-term profit goals finally led to its demise. After almost a century of operation, the effects of Bethlehem Steel’s closure on the city were heartbreaking, as thousands of jobs disappeared instantly, along with 20 percent of the city’s total tax base. All that remained was an impending bankruptcy claim and the largest brownfield site in the country.

Environmental Remediation: Following the closure of operations and before the design team became involved, BSC, the Pennsylvania Department of Environmental Protection, and the EPA enacted a cleanup agreement under which 375 tons of soil contaminated with heavy metals and toxic compounds was excavated and transported to a permitted landfill, then backfilled with clean fill. Along with the excavation and removal of soil, removal of petroleum products and pathway elimination were implemented.

Social Remediation: After cleanup activities were completed, project designers and officials still faced community concerns stemming from the proposed construction of a casino. A contingent of the city’s inhabitants focused on the potential negative social consequences of the development. Would Sands Bethworks be able to change local perceptions of “outsider” businesses? And beyond economic impact, how would the mixed-use project enhance Bethlehem and integrate into the city?

In an address to residents, Bethlehem’s mayor reached out to relieve apprehension and convey the social benefits of Sands Bethworks. By highlighting the economic power of legalized gaming as a catalyst for revitalization, residents were made to understand how the casino would save Bethlehem’s rich history rather than supplant it. With new capital and resource streams, the blast furnaces and historic buildings in addition to the community’s vision could be preserved and restored, thus saving the perception of Sands Bethworks while ensuring proper support from the constituency. Three years after opening in 2009, house sales increased 13 percent and the median price of homes increased 2 percent in one year. Around 2,500 people remain employed at Sands Bethworks, and more than $9 million in host fees feed into the city’s budget annually.

Sustainable Design: After careful analysis, the focus of the redesign became to preserve and elevate the site’s historic industrial setting while capitalizing on its current potential as an engine for economic growth. Through the reuse of buildings and careful design measures, sustainability was an achievable priority despite challenges. During numerous soil corrosivity tests and topsoil suitability tests, the continuous extraction and movement of iron ore was found to have left soil alkalinity levels abnormally high. Because alkaline soils lock up iron, causing chlorosis in plants, low-maintenance, alkaline-tolerant vegetation was selected to counteract this condition. Evergreen plants such as birch and juniper diminished the need for amending large quantities of soil, saving costs and increasing sustainable performance. Additionally, trees, shrubs, and groundcover further cleaned soils through processes of phytoextraction and phytodegradation by collecting and neutralizing contaminants within the plant’s biomass. But first came the cleanup.

Saving Water Quality: To remediate water conditions, over 25 gravel and vegetated bioswales were built into depressed areas within the landscape, intercepting runoff and storm water over 11 acres of land and functioning as natural water purifiers through percolation for eventual recharge of local aquifers. During the design process, two types of swales emerged to capture 36,574 cubic feet of water per two-year storm event. Swales located in the parking lots consisted of an amended soil mix of 30 percent compost and 60 percent topsoil with an under drain, while gravel swales near the entrance included an additional six inches of gravel on top. By installing over 30 depressed curbs along entryways, runoff could easily reach infiltration areas, reducing pollutant loads under state standards by 50 percent in three categories: total suspended solids, phosphorus, and nitrogen. Slow infiltration due to low-permeable soil conditions was also reversed as a direct result of the installed swales and accompanying under drains.

Structural Tribute: For historic preservation purposes, the design team proposed a simple, low-maintenance landscape that would salvage and repurpose many of the industrial buildings and relics abandoned on-site. Upon entry, the historic legacy of Bethlehem Steel is immediately evoked as visitors pass under a massive ore crane once used for moving large volumes of material from the railway and river. Surrounding this dramatic gateway feature are gabions filled with reclaimed materials; conjunctive grading underneath the crane steps down to mimic historic ore extraction activity. Buildings have also been salvaged and will be reprogrammed over the coming years, with 23 of 33 existing buildings being retained. One cluster, known as the Johnson Machinery complex, is being turned into 196 condominiums and an indoor parking structure with the largest restaurant in the Lehigh Valley. Further, the old roofs from the complex were repurposed and used as covering for outdoor courtyards.

Just south of the main parking lot, sections of leftover trestles that carried gravel, rock, and other materials were preserved to define the southern edge of the parking perimeter. To unify both new and old site conditions, the design followed the lines of the trestle structures through the site, creating order based upon historical precedence.

By respecting and emphasizing the industrial scale of the place, Sands Bethworks stands as a paradigm of catalytic action, with surrounding developments following suit: a new multi-purpose events center opened in May 2012; the broadcast home of the local PBS affiliate is now located at Bethworks; and a site for the home of the National Museum of Industrial History is being proposed. Ten years ago, a convergence of issues centered on environmental justice, aesthetics, and historical imperatives would have been difficult to imagine at the former Bethlehem Steel plant; however, today Sands Bethworks represents how seemingly hopeless conditions can actually catalyze economic prosperity and social fortitude to become an educational tool for other towns in the United States looking for solutions within their own postindustrial landscapes.


The Cross Creek Ranch acreage was worn-down pasture land when Trendmaker Homes bought the ranch, located about 30 miles west of Houston. The curves of the land’s natural creek had been straightened, the grass was pounded by cattle and the property was barren, without trees. Sediment filled the creek, which no longer supported wildlife. SWA devised a plan to re...

SWA prepared a land use and urban design plan for six miles of waterfront adjacent to downtown Long Beach. Through a series of meetings with local community stakeholders, we were able to determine the different needs of each district in the plan: of critical importance was the need to preserve valuable open space inland, and to maintain an ecological corridor ...

The story of Sims Bayou is based on a large vision. The project is the first step in implementing a long-range plan for watershed greenbelts in the Houston region, a comprehensive system which addresses the potential for parks, wildlife habitat, and economic real estate revitalization while also controlling flooding. The Sims Bayou project has profoundly chang...