Iconic Celebration of the Texas Prairie 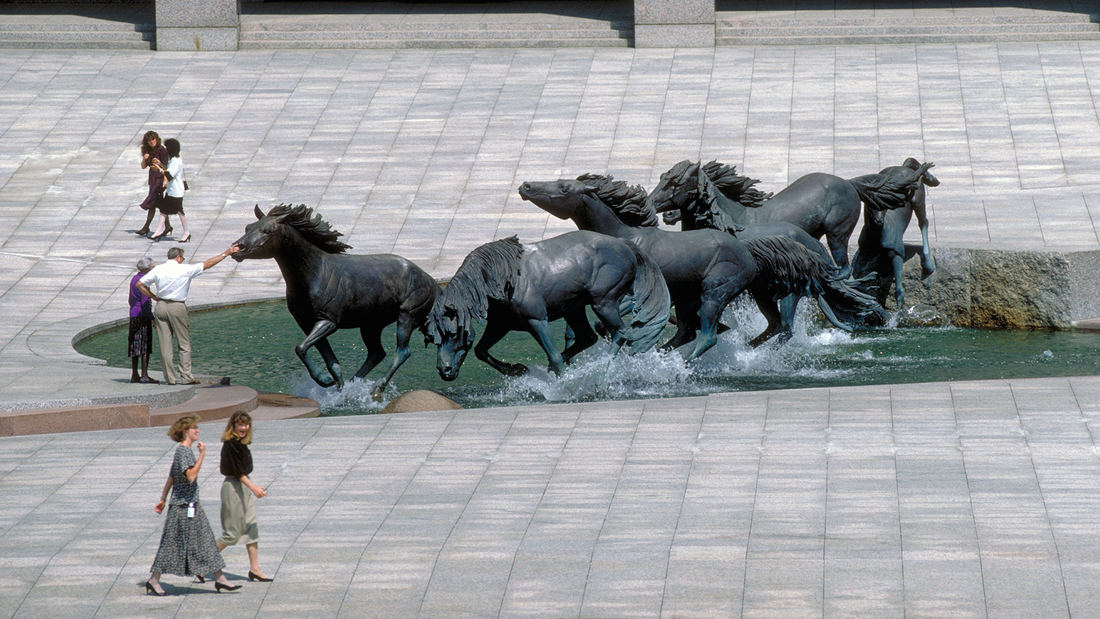 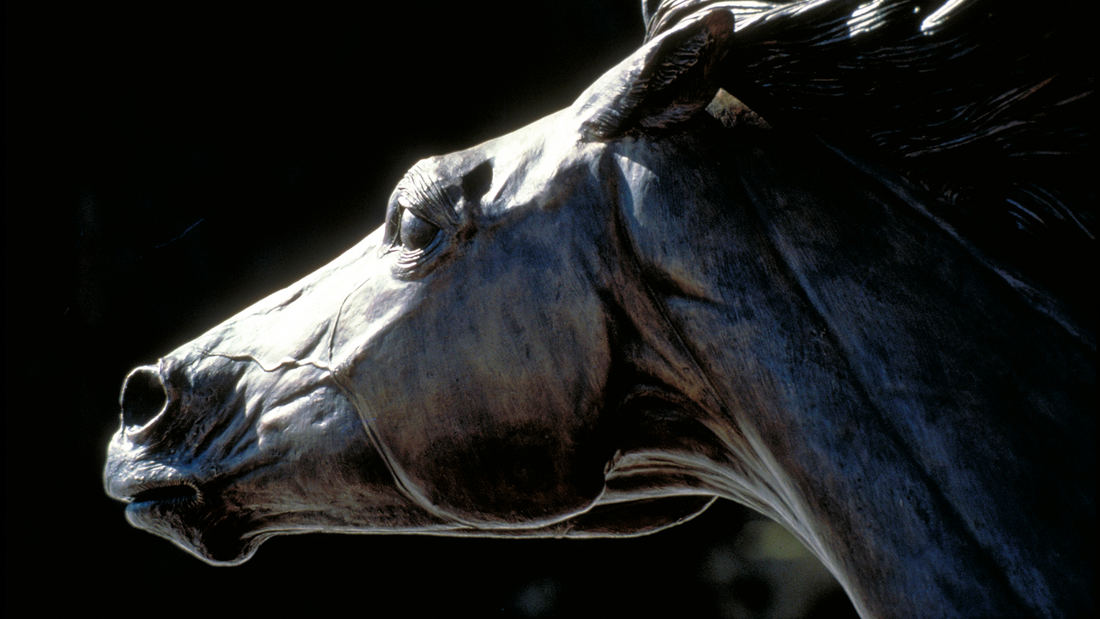 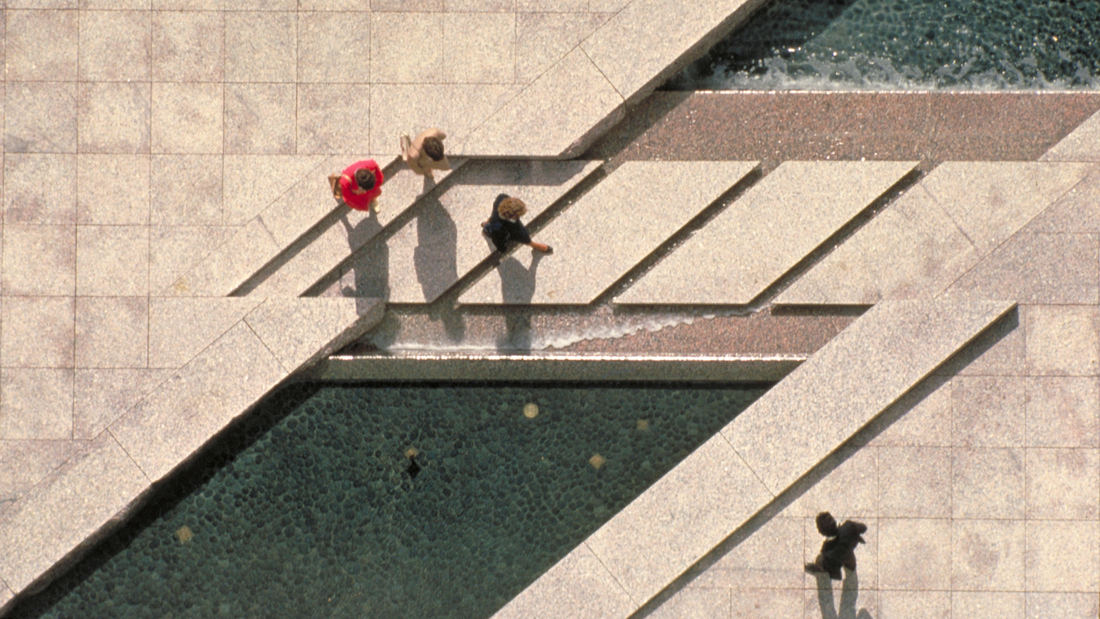 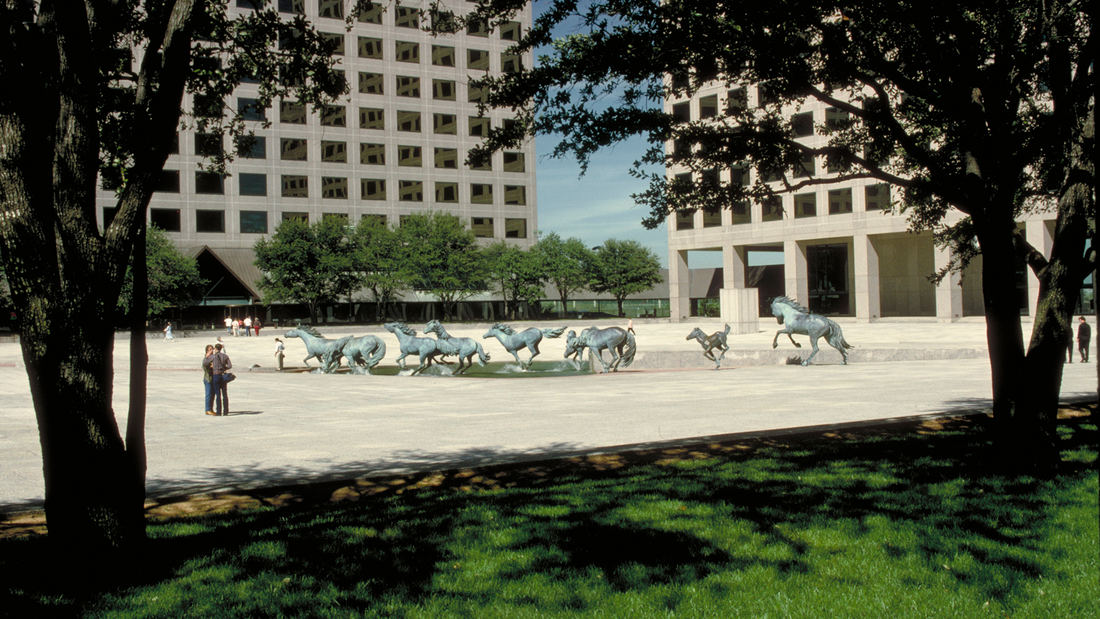 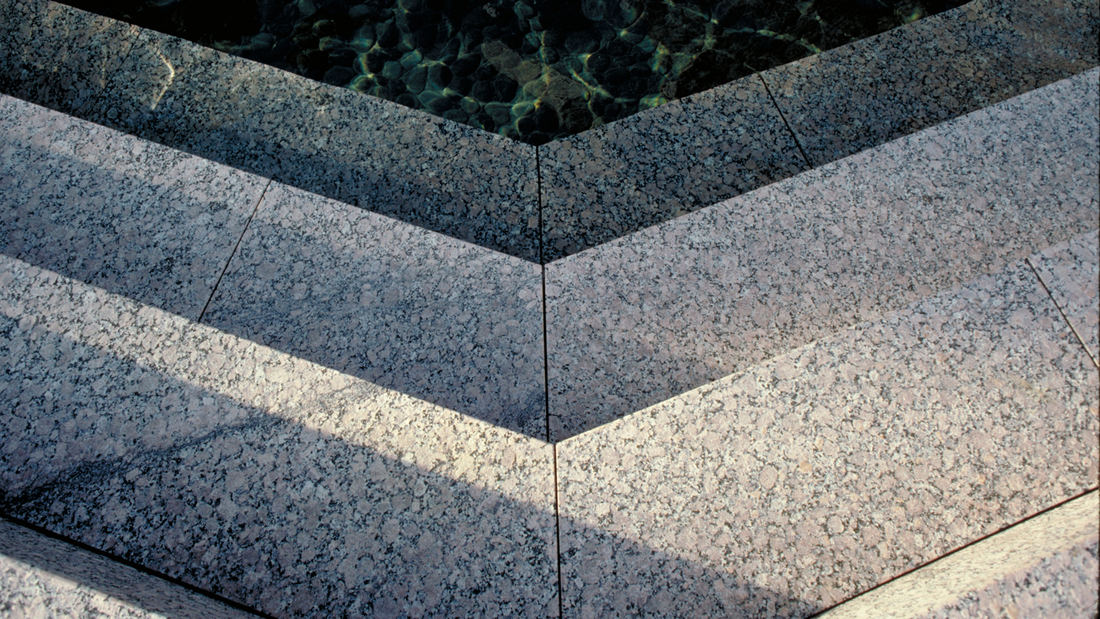 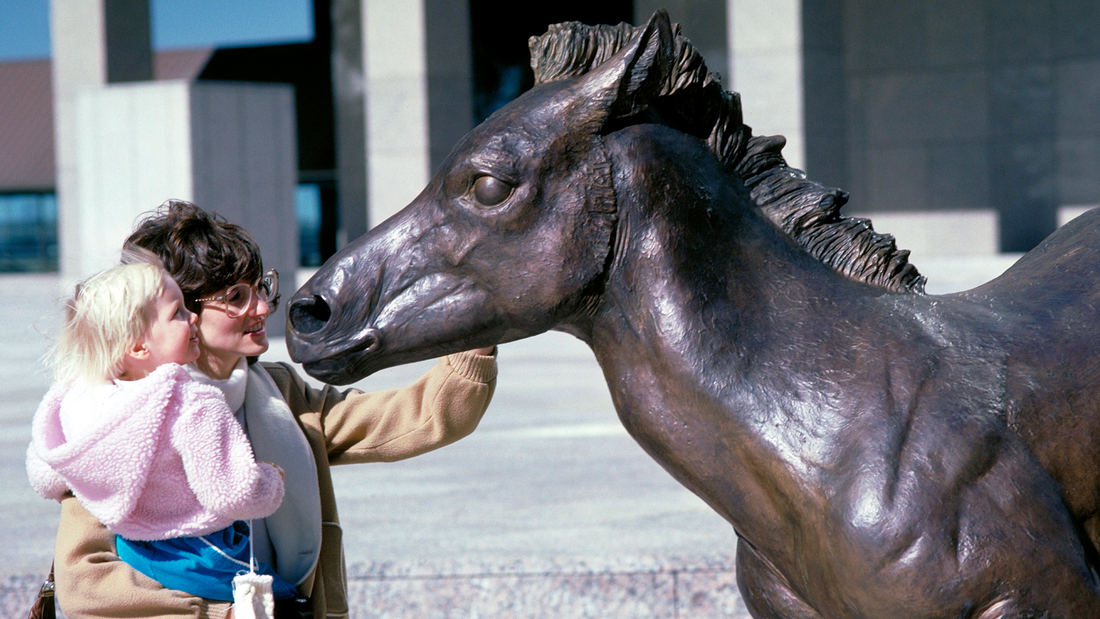 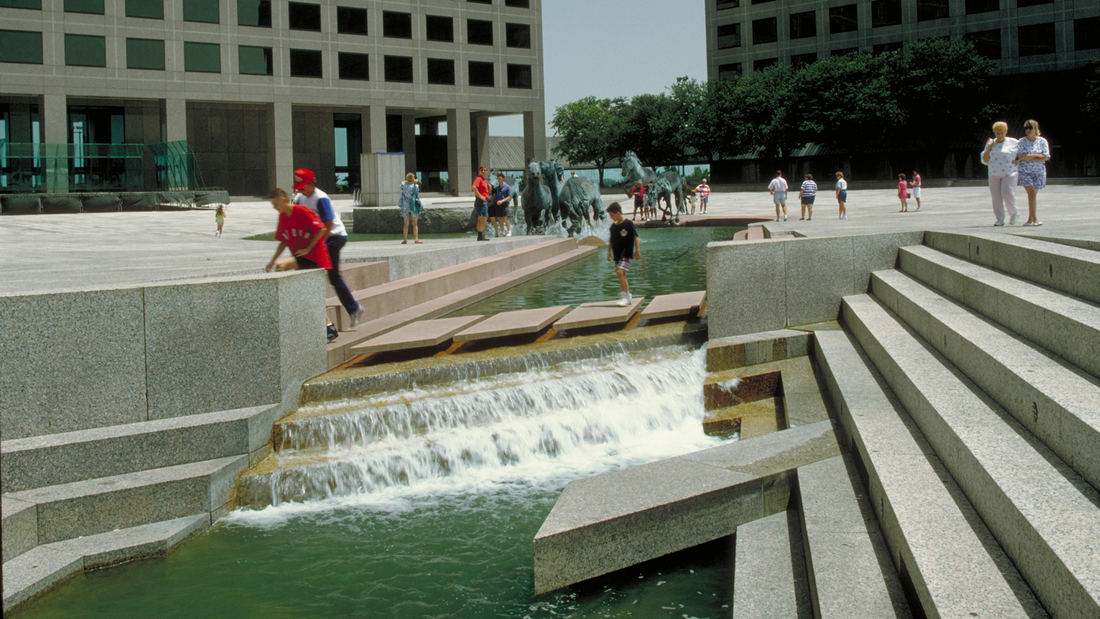 People love Williams Square. For years, the wild mustangs have galloped across the covers of phone books, Hertz rental car schedules and tourist brochures. Families make holiday pilgrimages to see and touch the world’s largest equestrian statues in a granite plaza framed by the cold, clean lines of modern office buildings. There is nothing else there – no farmers market, no peanut vendors, no city hall. Nevertheless, with the exception of the Alamo, Williams Square is the most visited place in all of Texas. Williams Square is an abstraction of the west Texas landscape, a semi-arid prairie the size of two football fields constructed of Texas pink and bright blaze granite. Williams Square endures as an icon, offering a spirit hard to come by in “edge cities”, a designed environment that has imbedded itself in the minds and travel plans of many. “El Ranchito de Las Colinas” or “the little ranch of the hills” was a family-owned ranch until Ben Carpenter- then chairman and CEO of the Southland Financial Corporation – developed plans for a master planned community that would take advantage of a State Highway realignment and the new Dallas/Fort Worth International Airport, immediately to the west. Set on creating a quality place, Carpenter conceived of a grand central plaza for his project, something expressly Texan in style. Three sides would be sleek modern office buildings – a pair of 14-story towers and a 26-story central tower – and the fourth would be a convention center with an adjacent hotel. For inspiration, Carpenter traveled the world. In Johannesburg, South Africa, he found it in a sculpture by African wildlife artist Robert Glen that depicted an African antelope jumping through a stream. Carpenter hired Glen to create a memorial to the heritage of Texas, expressed through the clear and undeniable imagery of nine bronze wild mustangs, one-and-a-half life size, moving across an open plaza through a stream of running water. The concept of a vast space celebrating the Texas mustangs was firm in the mind of Ben Carpenter when the design team was retained. The landscape architects accepted this vision and set out to create a design for the plaza and watercourse that abstracts the West Texas landscape as the setting for larger-than-life mustangs galloping through an arroyo. They worked closely with the client to site the office buildings and sculpture, and achieve the best possible proportions for the open space. The plaza and sculpture fit together so that the horses can be viewed from any direction. Planting is limited to live oaks and groundcover along the perimeter of the space. SWA’s design sculpts the granite plaza to recreate geologic layers found in the prairie. Selected grains were layered into certain positions. The watercourse flows diagonally across the plaza and over the granite, so that it appears to have eroded the stone over eons of geologic time. The banks are very smooth, and the bottom is of moonstone, a black rock that causes reflections in the water, especially at night. The granite also takes on a different color when wet. Rough brown cobbles contrast with smooth granite within the stream. The watercourse plays a major role in the design of Williams Square. Small jets express the splash of water as the horses cross the stream, adding to the sense of dynamic movement by means of an intricate pumping system. The 400-foot long stream varies from 10 to 40 feet wide and is no more than 18 inches at the deepest. Its volume is 1500 gallons per minute, entirely re-circulated. There are three pedestrian crossings, one down at the lower end, two on the upper. The plaza is built on grade, with about a nine-foot drop from one side to the other, so the watercourse fits naturally into the space. The design incorporates an 8,000-pound concrete plinth as a base for each horse. The success of the space lies in the approach to scale. From a distance, against the backdrop of the 14- and 26-story buildings, the mustangs appear relatively small. But as one gets closer, they become larger and larger until they are, in effect, larger than life. SWA accomplished this by designing and resolving detail in the field in close collaboration with the sculptor, rather than working “on the boards”. This approach led to some key decisions, such as using ambient building lighting for a more subtle night-time illumination of the plaza, and designing custom spray nozzles in the shape of a horse’s hoof. Williams Square was not designed to be a “people place” in the conventional sense. When Carpenter was asked about the need for shade in a hot climate, he retorted, “Shade? There’s no trees in west Texas!” Wide open spaces and blazing sun is part of the essential nature of the plains. Nevertheless, there are places along the plaza’s stream where people sit and enjoy the setting, and other places near the mustangs where the detailed sculptures may be viewed up close. Over the years the bronze horses have been loved and touched and repaired. The small colt has broken and been fixed. But the design was built to last, and Carpenter’s original vision endures.


Located within El Pueblo, the birthplace of Los Angeles, La Plaza Cultura Village is a mixed-use, transit-oriented development totaling 425,000 square feet of retail, apartments (20 percent of which are low income units), cultural facilities, and public open space. Two large, surface parking lots have been transformed into a vibrant community that builds upon ...

Nanjing Greenland International Commercial Center is an urban high-rise project containing two major sites, A1 and A2. The 450-meter main tower, Zifeng Tower, with its concentric rings of mixed trees and linear water features, is the focus of the A1 site. The landscape design encompasses existing parks as well as the adjacent historic features in o...

SWA provided comprehensive planning for a new 300-hectare commercial, mixed-use center in northeast Riyadh abutting the KKI Airport. This area is part of an urban management framework being developed to guide the future growth of the city. SWA developed a plan and implementation strategy to establish an urban center comprising residential neighborhoods, corpor...

Nanjing Greenland International Commercial Center is an urban high-rise project containing two major sites, A1 and A2. The 450-meter main tower, Zifeng Tower, with its concentric rings of mixed trees and linear water features, is the focus of the A1 site. The landscape design encompasses existing parks as well as the adjacent historic features in o...

Global Village, a pedestrian-only infill neighborhood adjacent to Rochester Institute of Technology’s academic core, and its mixed-use centerpiece, Global Plaza, create a social heart for 17,200 students and 3,600 faculty and staff. The landscape architects and architects collaborated on an urban design that establishes multiple “crossroads” ...

In the heart of Salt Lake City, City Creek Center is the retail centerpiece of one of the nation’s largest mixed-use downtown redevelopment projects. This unique fashion and dining destination includes a new two-story retail center and over 500 residential rental units over four levels of underground parking, all within a downtown setting that features s...

SWA provided full landscape architectural services for this mixed-use development, which includes a 120-room luxury hotel, five villa residences, a supporting office complex, fitness center, spa and multi-use space. The Sand Hill Hotel and associated offices are nestled onto a dramatic hillside that slopes toward the Santa Cruz Mountains immediately beyond I-2...