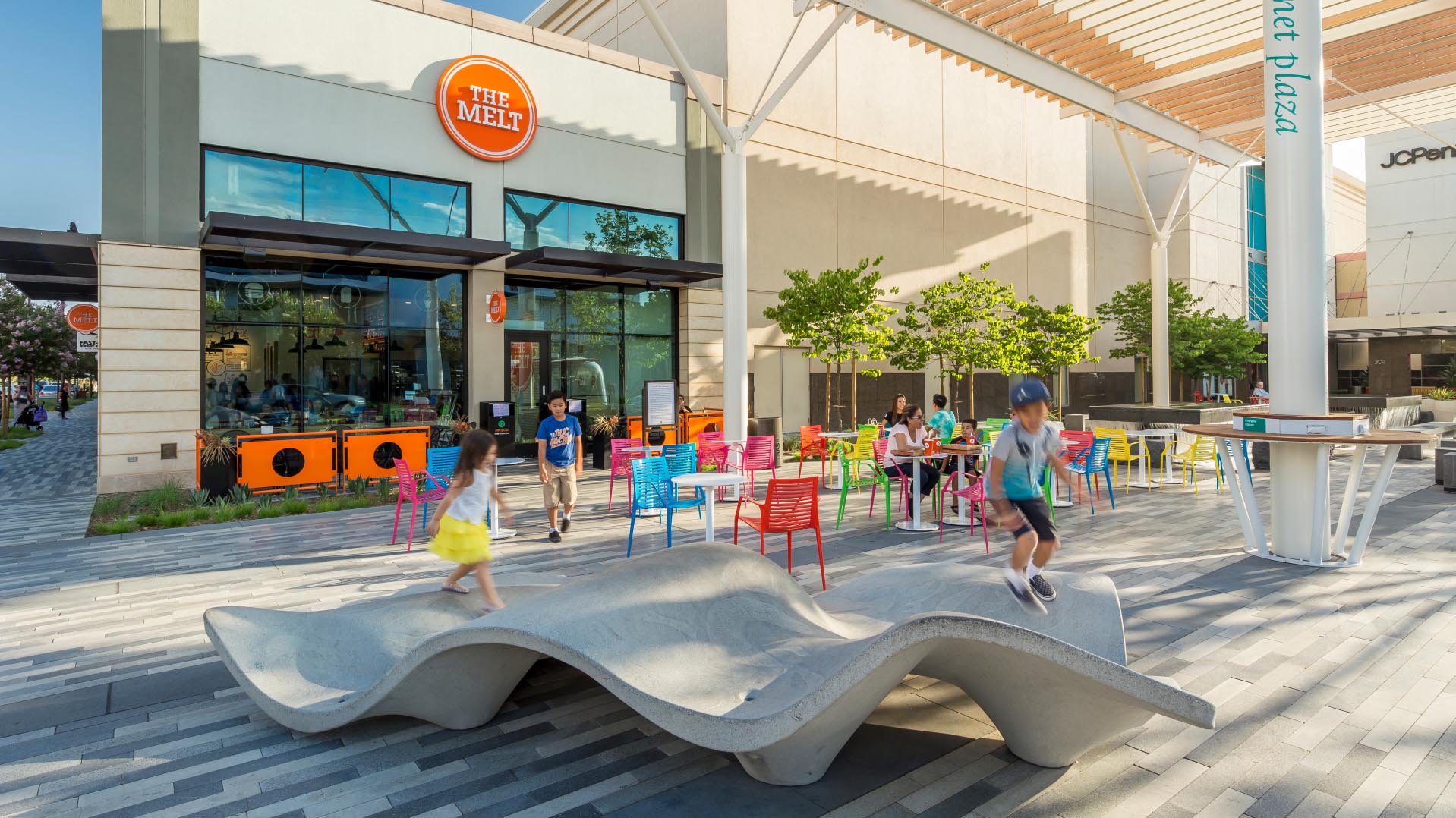 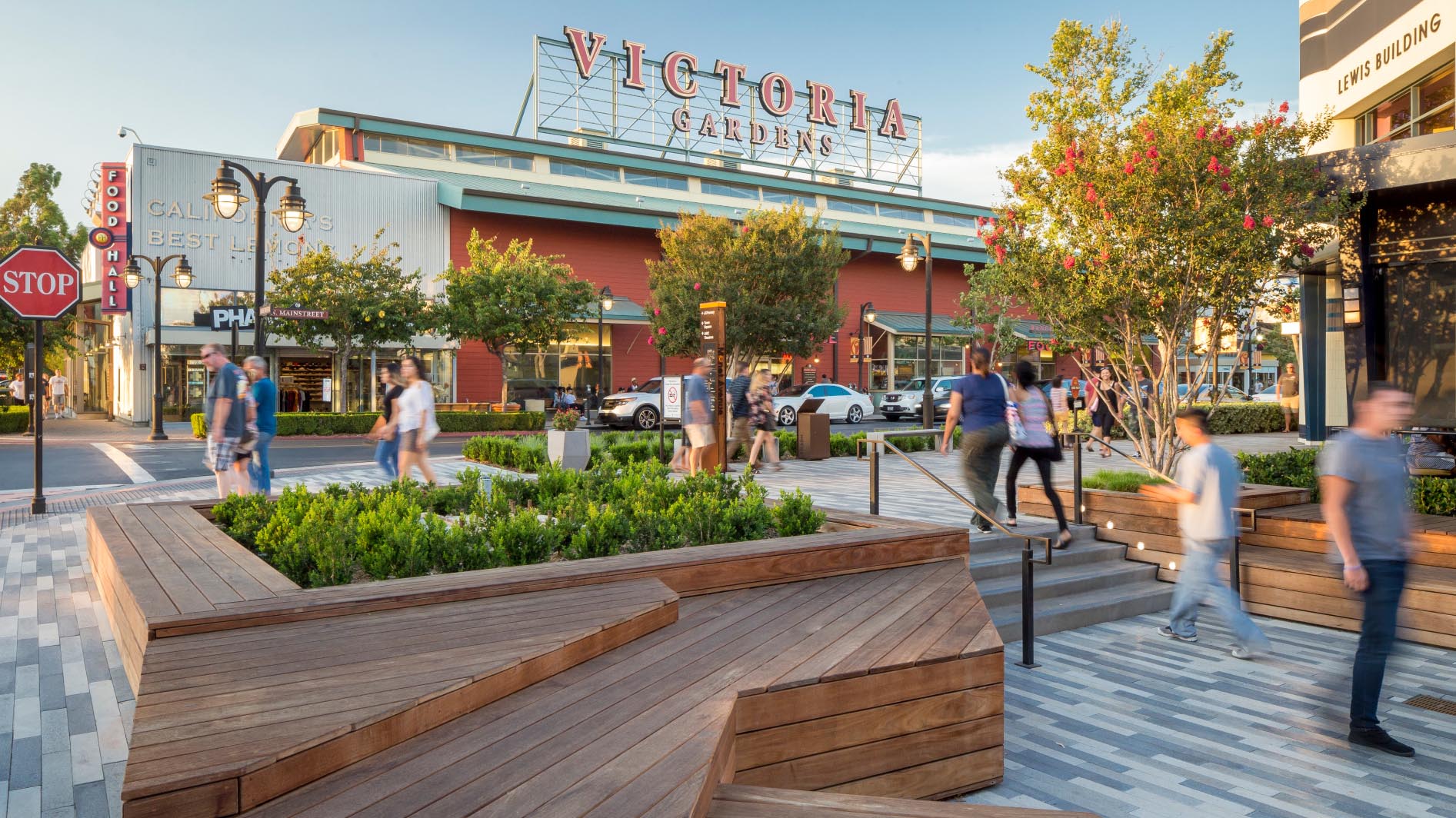 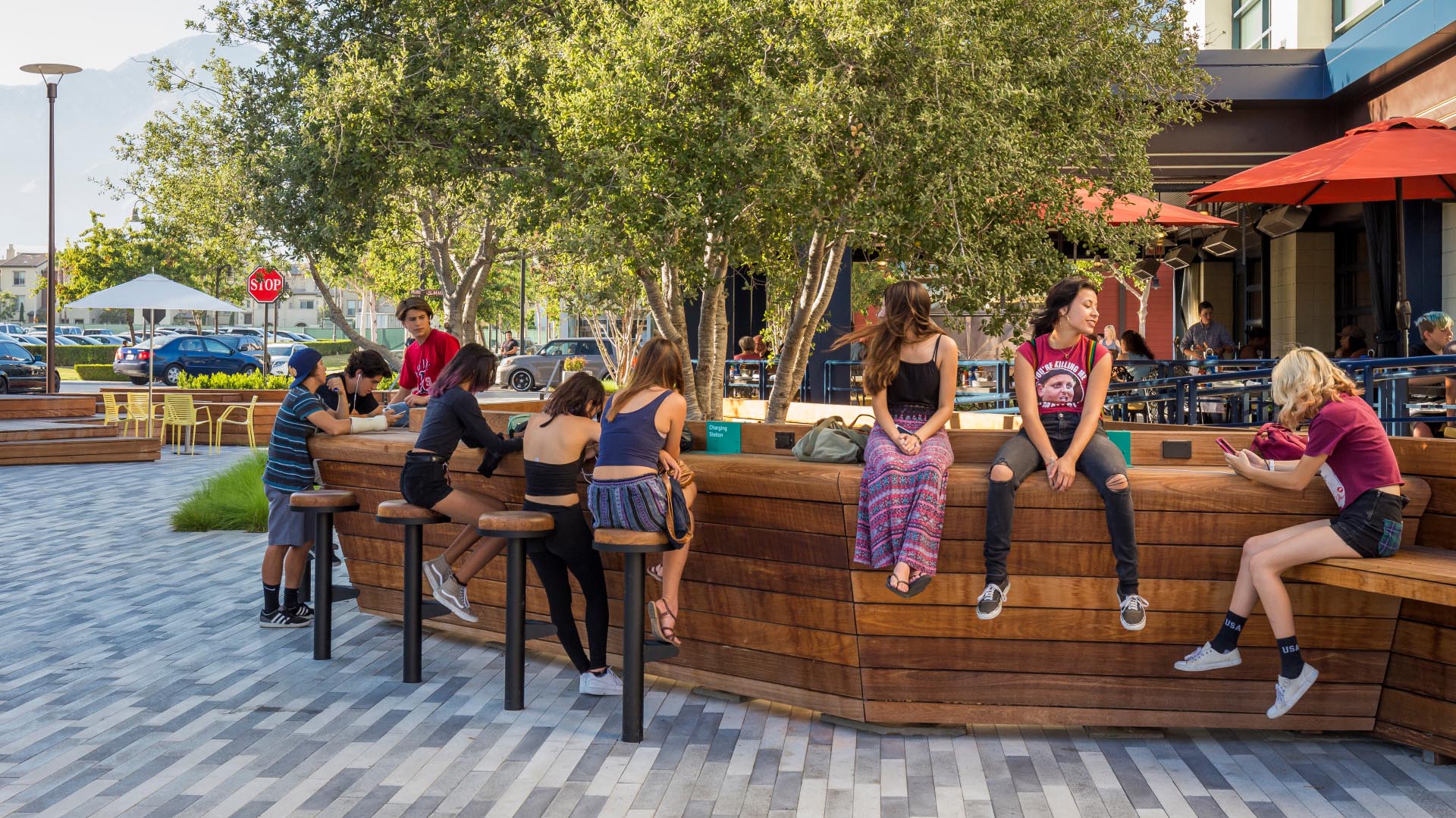 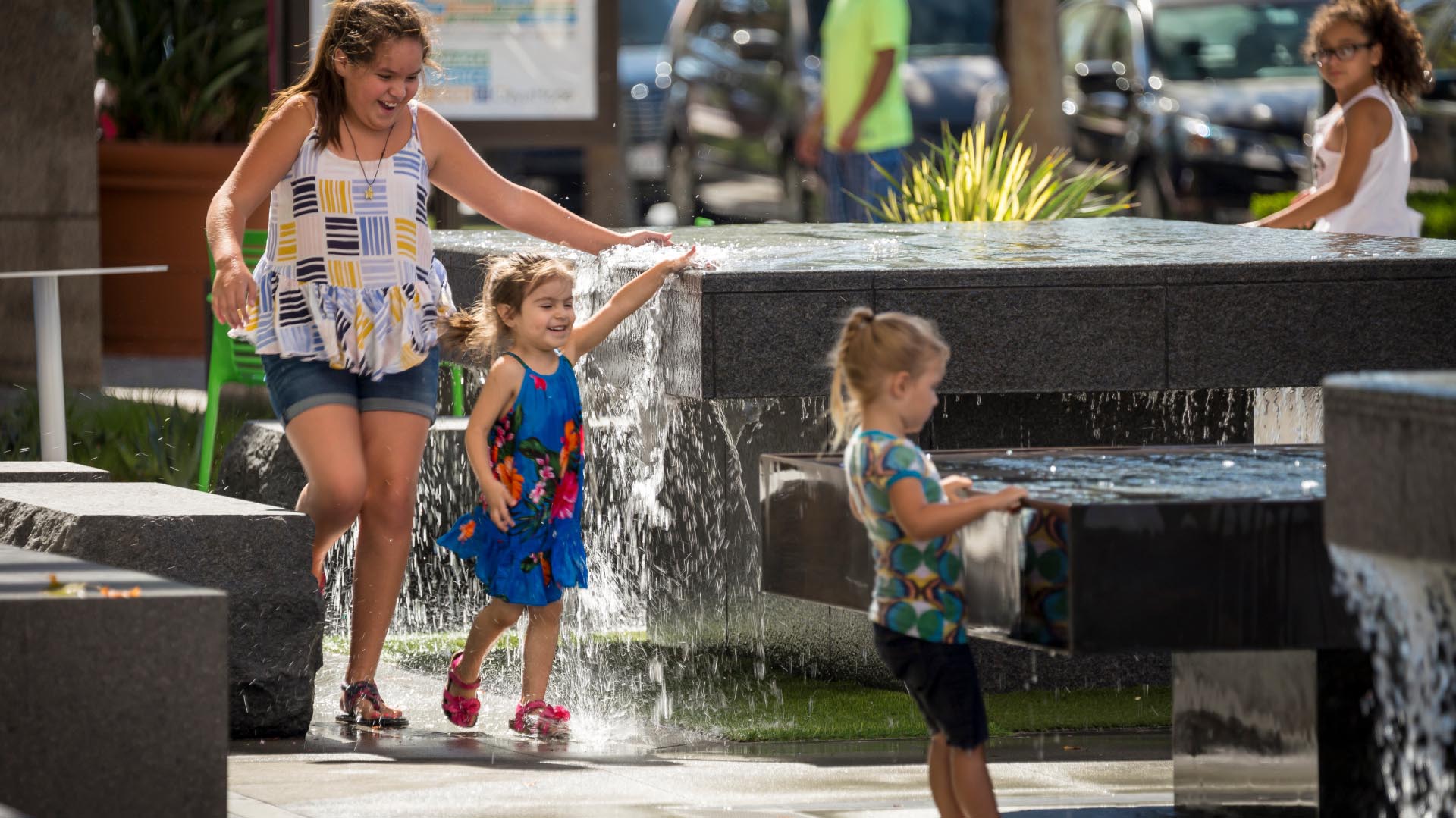 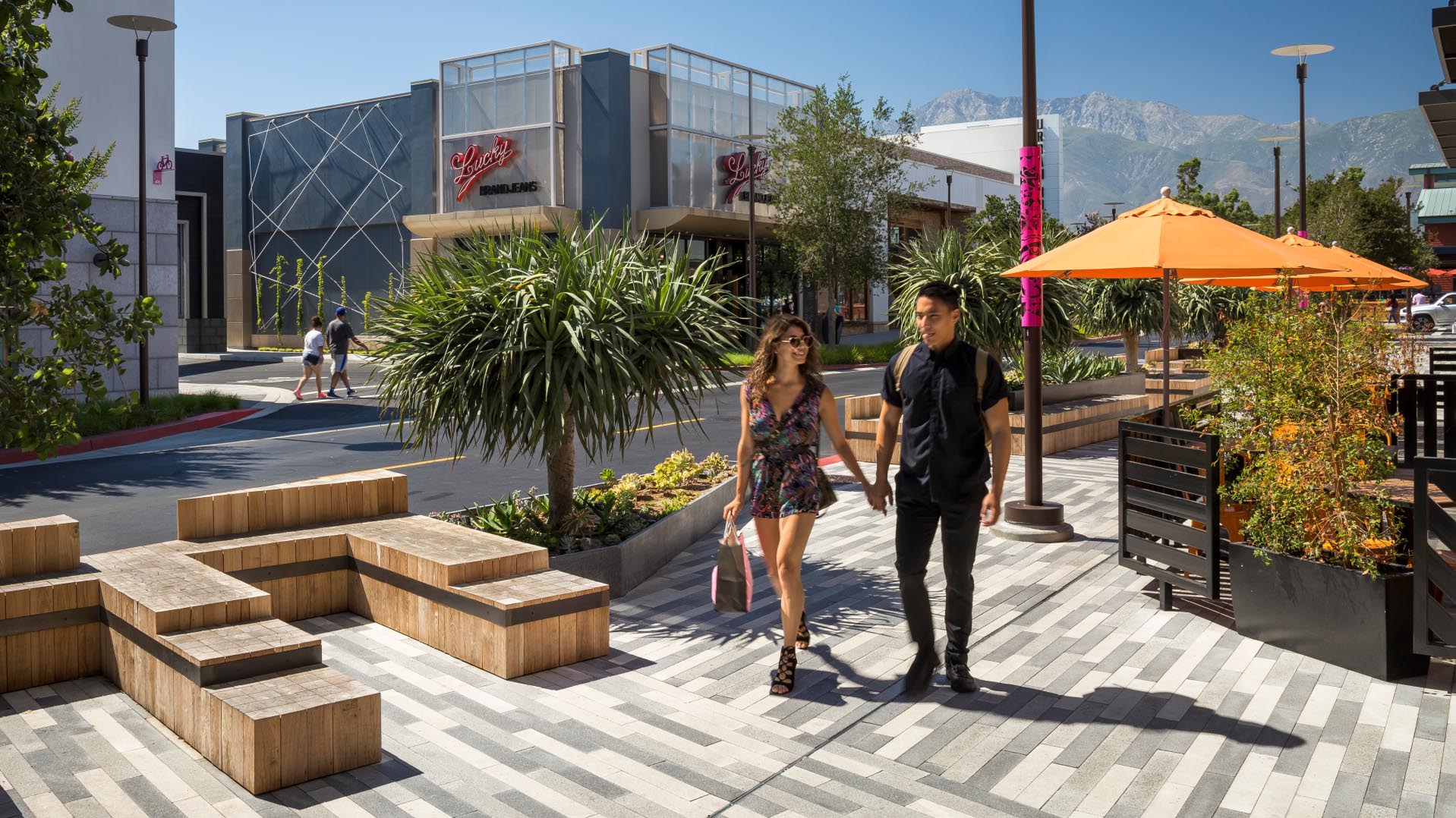 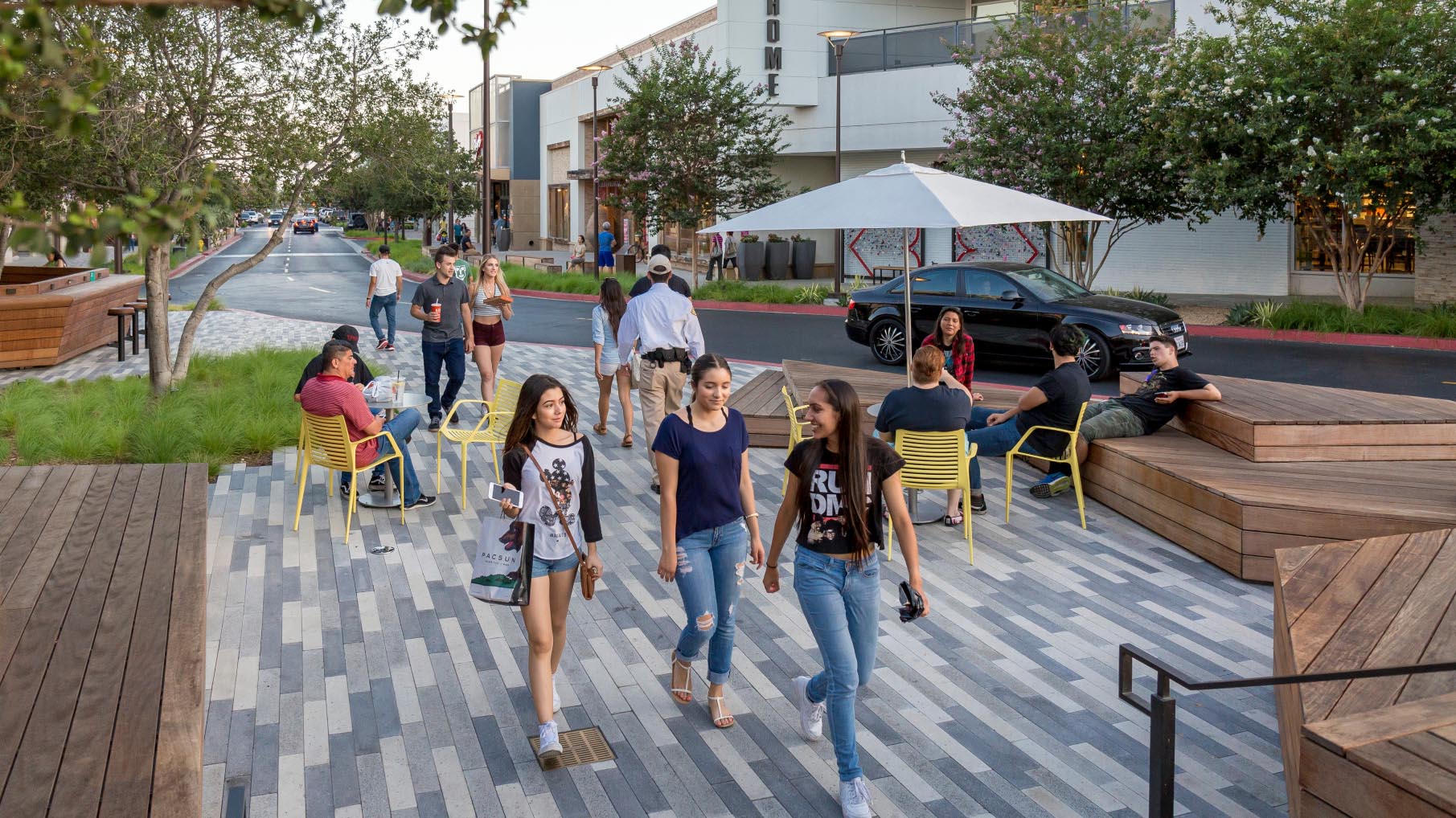 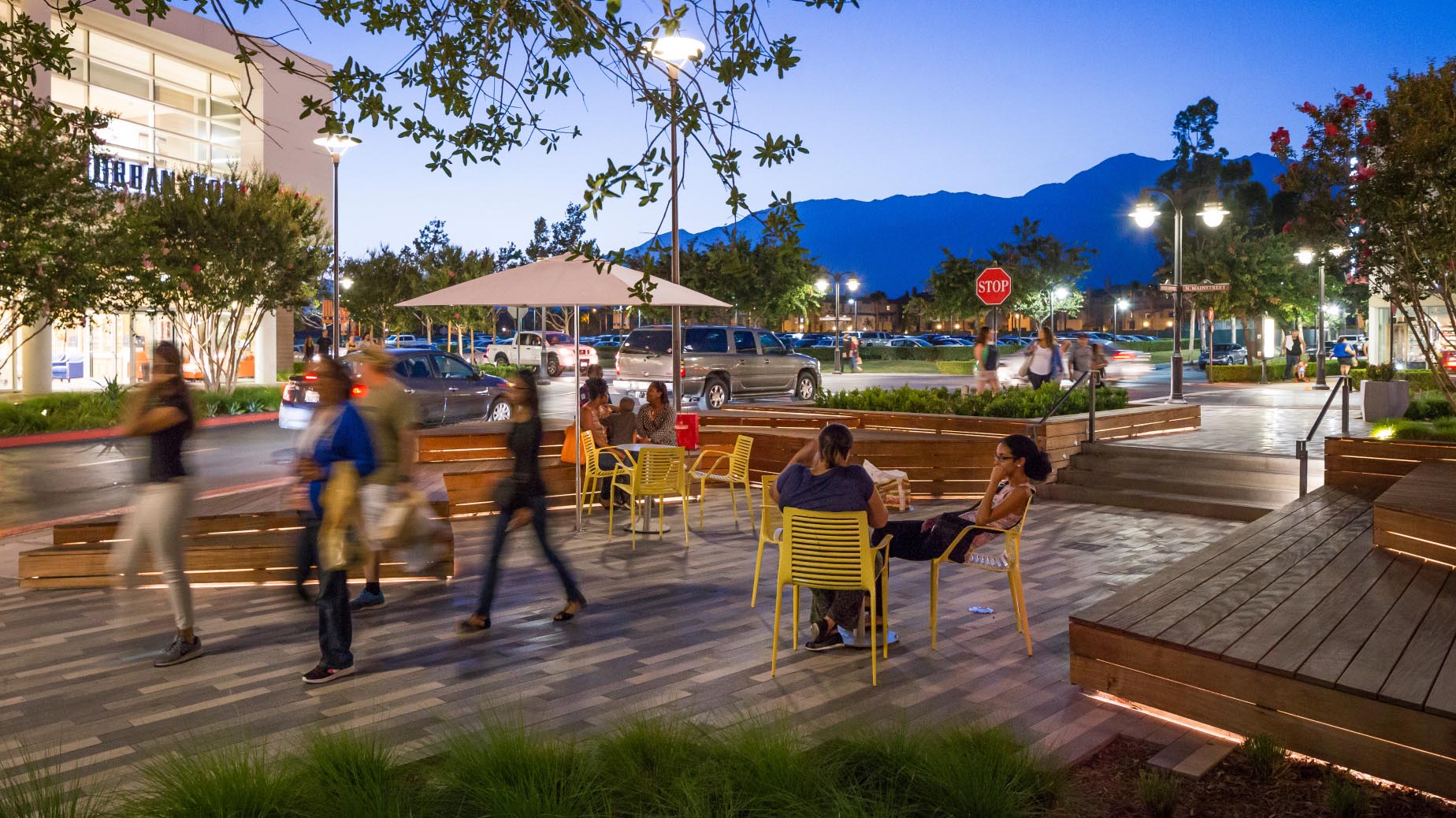 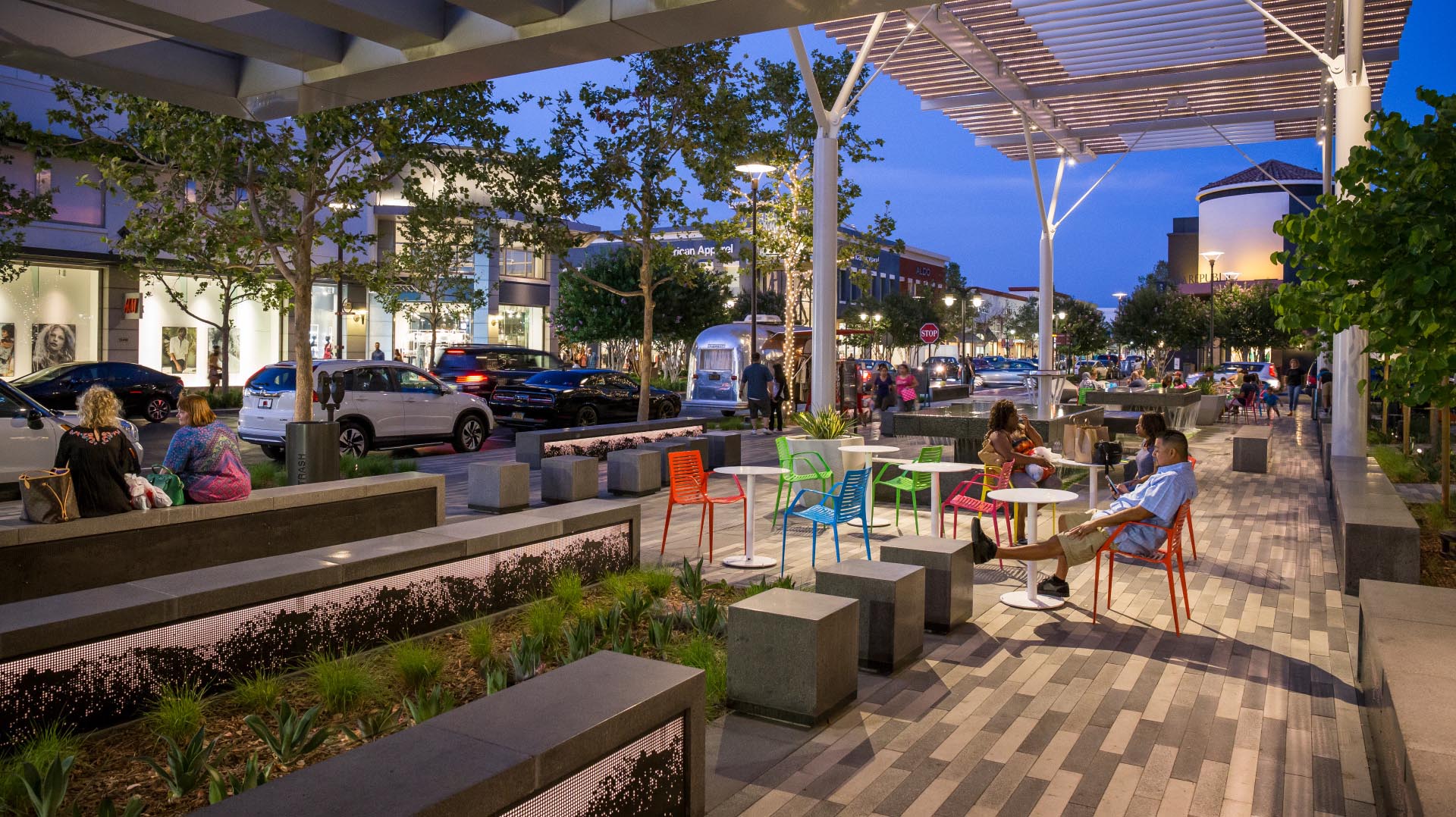 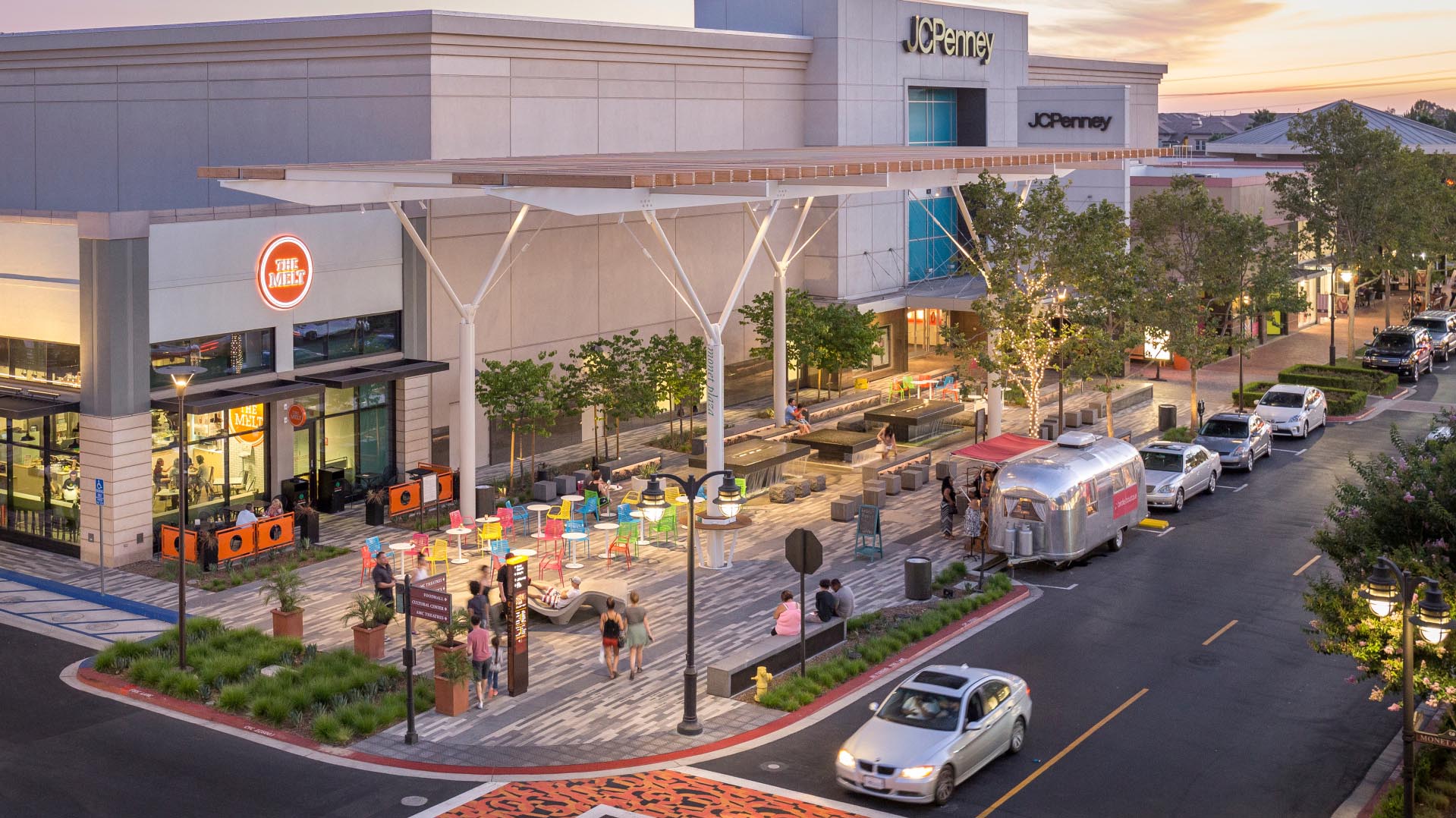 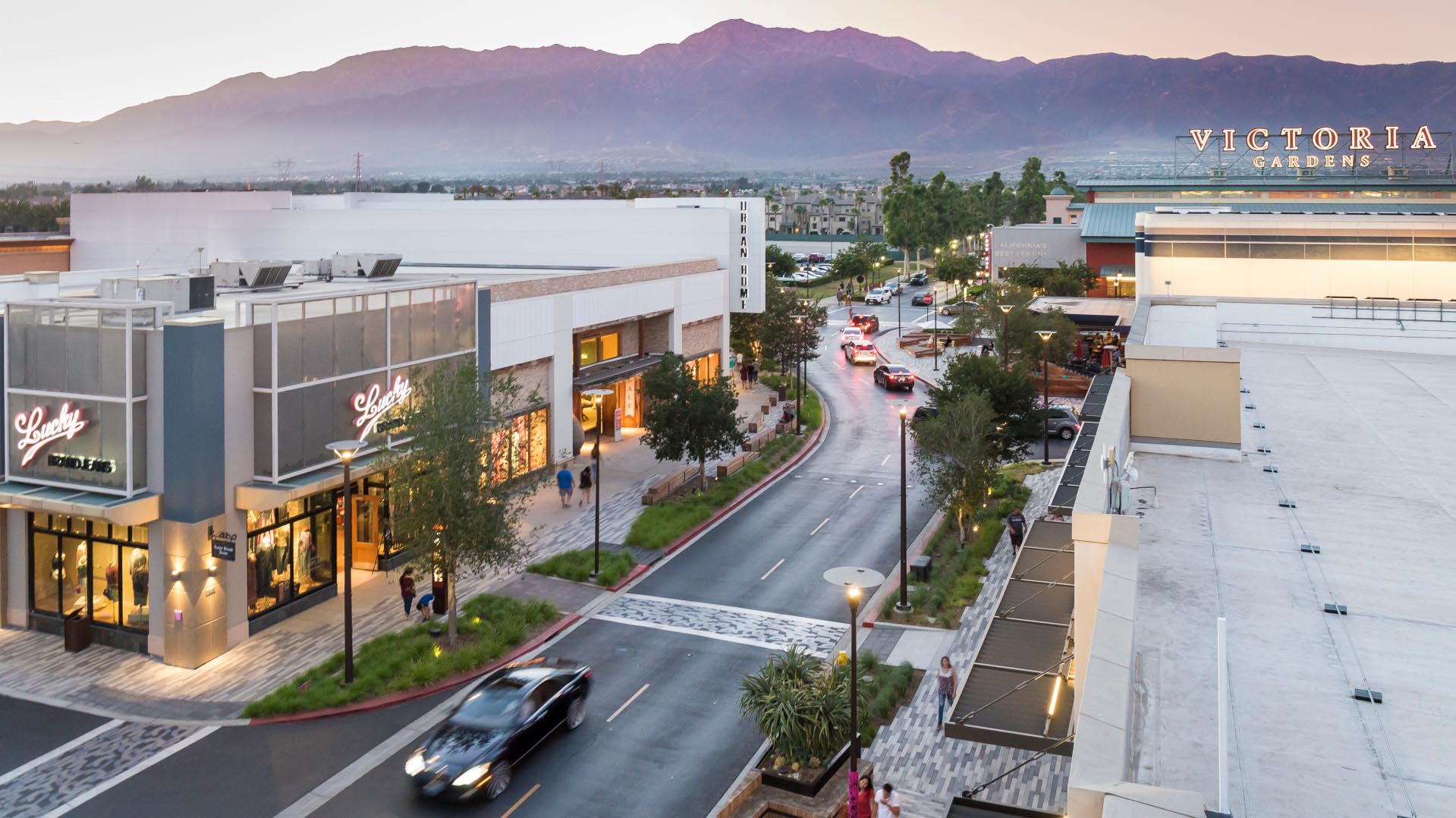 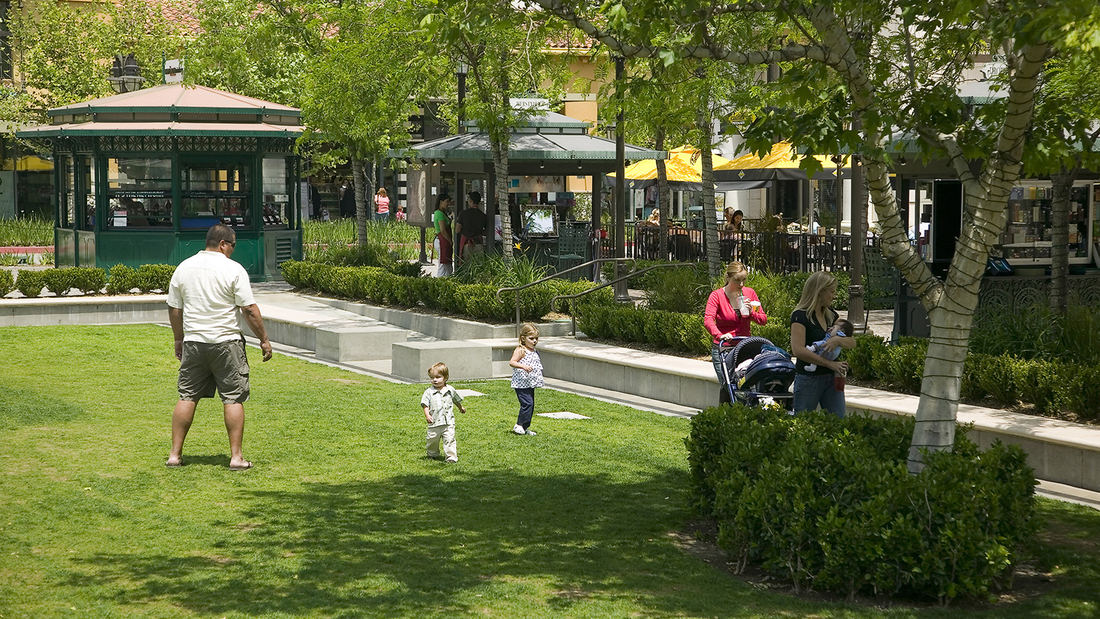 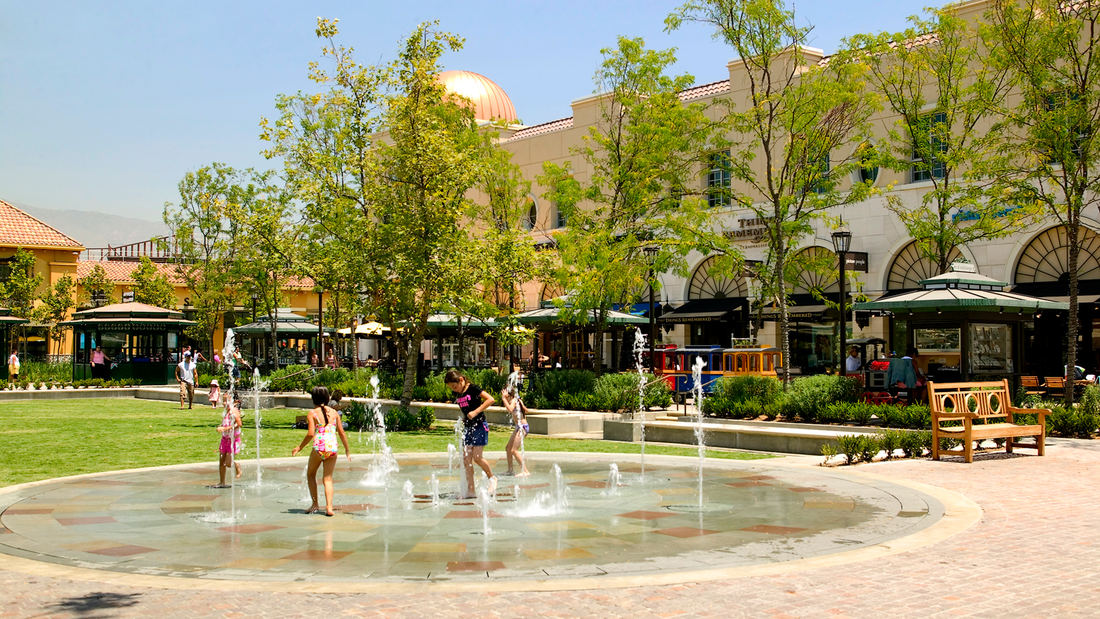 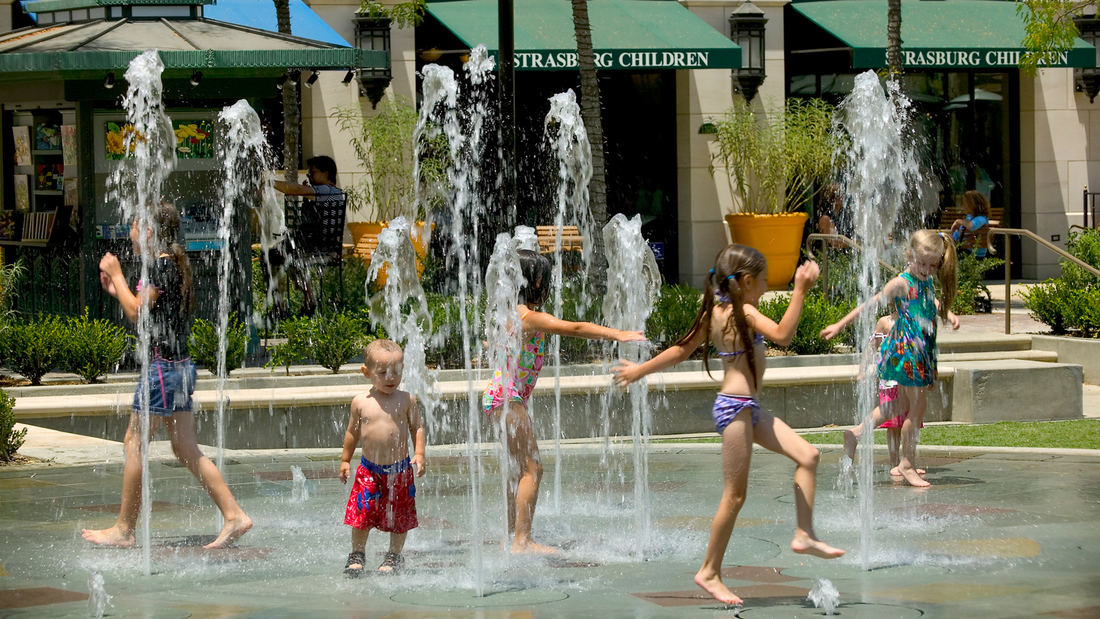 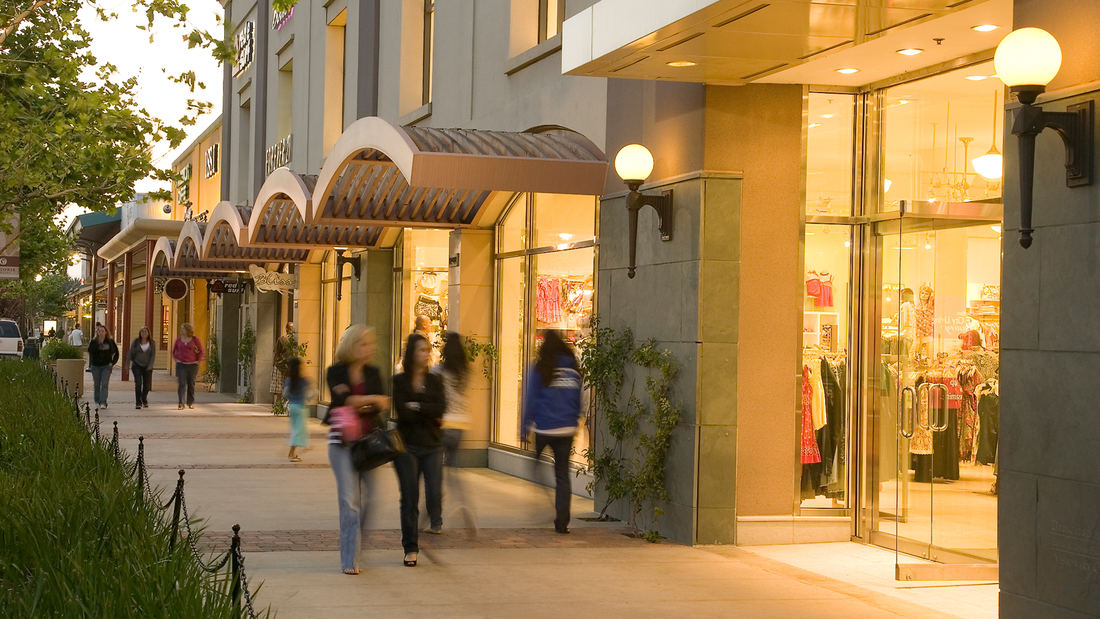 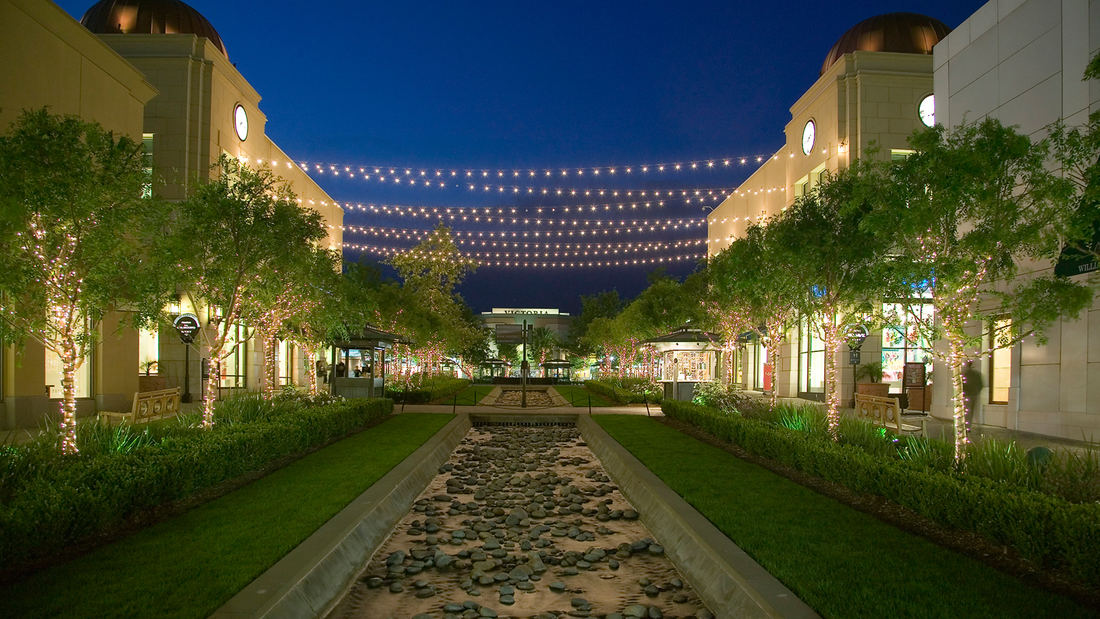 A decade after completing Victoria Gardens, the owner was looking to refresh the project to keep it relevant for years to come. SWA redesigned a three-block streetscape and plaza along Monet Avenue, a main retail street there. The focus is on the next generation of users, with a shopping environment that highlights the social landscape and blurs the lines between retail and recreation. The design scope included landscape, paving, fountains, site furnishings, and art interventions, with the use of drought-sensitive planting, high-efficiency irrigation, and innovative storm water treatment.

This 147-acre downtown combines the best traditions of Western American town centers with the social and planning demands of the early 21st century. Retail, office, residential, civic and cultural uses are placed within the landscaped urban experience of a traditional main street environment. The landscape framework for Victoria Gardens is a grid of local streets and sidewalks with a town square, plazas, paseos, and parks distributed throughout the downtown district. The streetscape trees are planted in beds of native shrubs and groundcovers to further enhance the garden heritage of the project.

Victoria Gardens will be the second largest open-air shopping center in the United States behind Stapleton in Denver, CO, which is being built by the same developer, Forest City Development.

Rancho Cucamonga, which is located in the Inland Empire, is expected to grow by about four million people in the next 15 years. The area has a rich history dating back to the mid 19th century. Six major trade routes passed through the area including the El Camino Real (connected the missions by a days travel), Santa Inez Trail (major trade route connecting the Colorado River to the settlements out West), and Route 66 (major vehicular route for the mass migration westward during the dustbowl and post WWII era).

You enter the site for Victoria Gardens through a formal Date Palm grove that calls back to the region’s agrarian roots while creating an identity from the nearby I-15 freeway. The downtown area is framed by parking lots containing linear planters of Bradford Pears creating an orchard-like effect. Both North and South Main Streets are lined with London Plane trees, which have a rustic quality that celebrates the passing of seasons through their fall colors. Other arterial streets are lined with California Peppers, Eucalyptus, African Sumac, and Aristocrat Pear.

This new mixed-use development features a complex program that includes a hotel, rental space for other companies, eateries, service apartments, and retail facilities. SWA’s design challenge was to create a common space that can be enjoyed by the disparate users on-site at any given time. A common plaza includes multiple restaurants on a terraced platform that...

A new residential tower has risen across the street from the Empire State Building. As a zoning incentive, a new public plaza was included to attract and accommodate the area’s tourists as well as its diverse office and residential neighborhood. The space is defined by a clean, contemporary design composition of spaces, elements and custom furniture meant to f...

The iconic architecture and riverside context that characterize Poly Pazhou were inspirations in this SWA/SOM collaboration, which also took adjoining development in the burgeoning region into account. Broad, sweeping landscape, featuring diverse local plant species, embraces both the soaring buildings and the Pearl River corridor, extending its spatial charac...

The Cities of Garden Grove and Santa Ana are developing a “vision” for redevelopment of the Willowick Golf Course site. This process explored conceptual land use options that are formed by community and stakeholder collaboration and input. The Visioning is intended to be used to guide the preparation of development plans for Willowick. The visioning...

Armenia has set an initiative to increase global tourism and develop a site within its capital city with majestic views of Mount Ararat, where Noah’s Ark is purported to have landed. SWA developed a strategic plan based on several principles derived from the existing context of the site: first, to capitalize its proximity to important landmarks that allow for ...

SWA collaborated with the Guangzhou Urban Planning Design & Survey Institute on a new urban design concept for the 2010 Guangzhou Asian Games. Situated between mountains to the North and the Pearl River to the South, Guangzhou has a unique condition, which allows for the use of existing water channels for the framework of a new open space network. By abstr...

People love Williams Square. For years, the wild mustangs have galloped across the covers of phone books, Hertz rental car schedules and tourist brochures. Families make holiday pilgrimages to see and touch the world’s largest equestrian statues in a granite plaza framed by the cold, clean lines of modern office buildings. There is nothing else there – no farm...