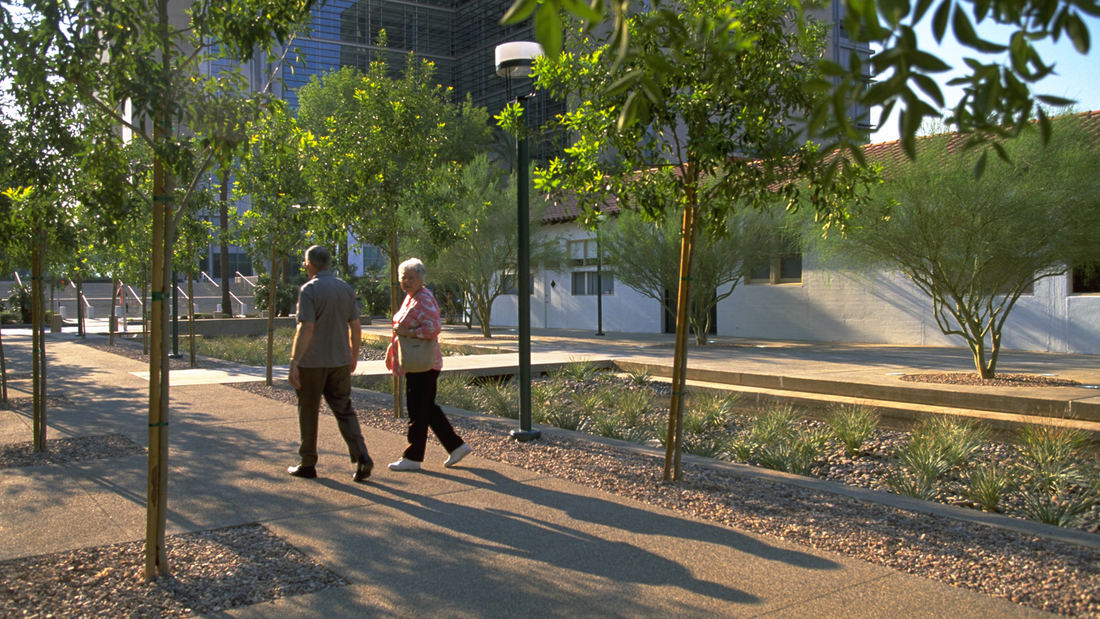 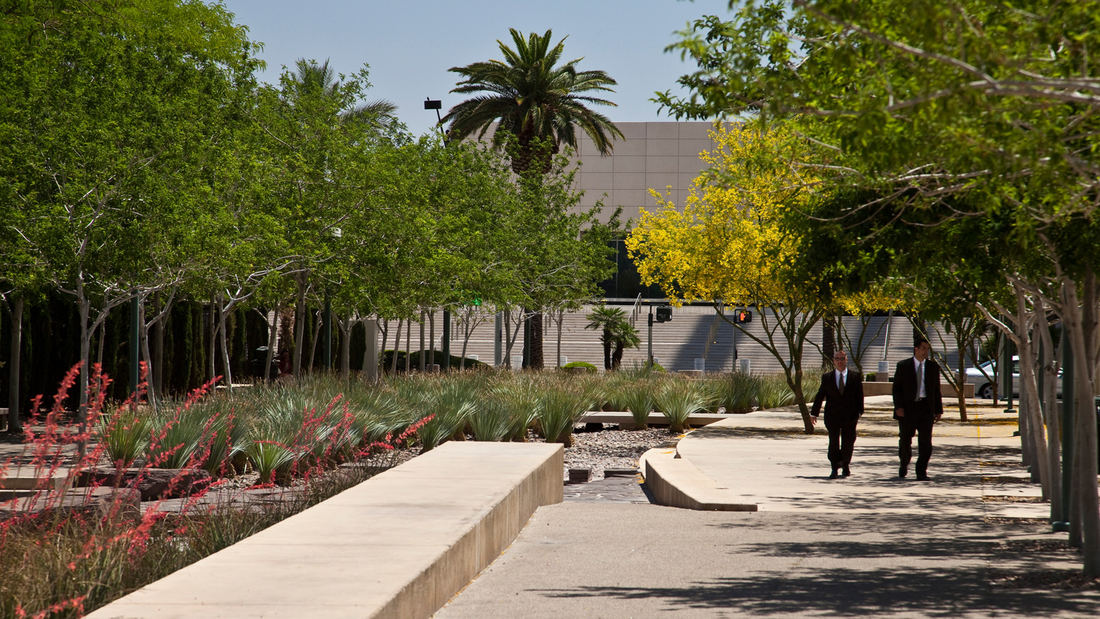 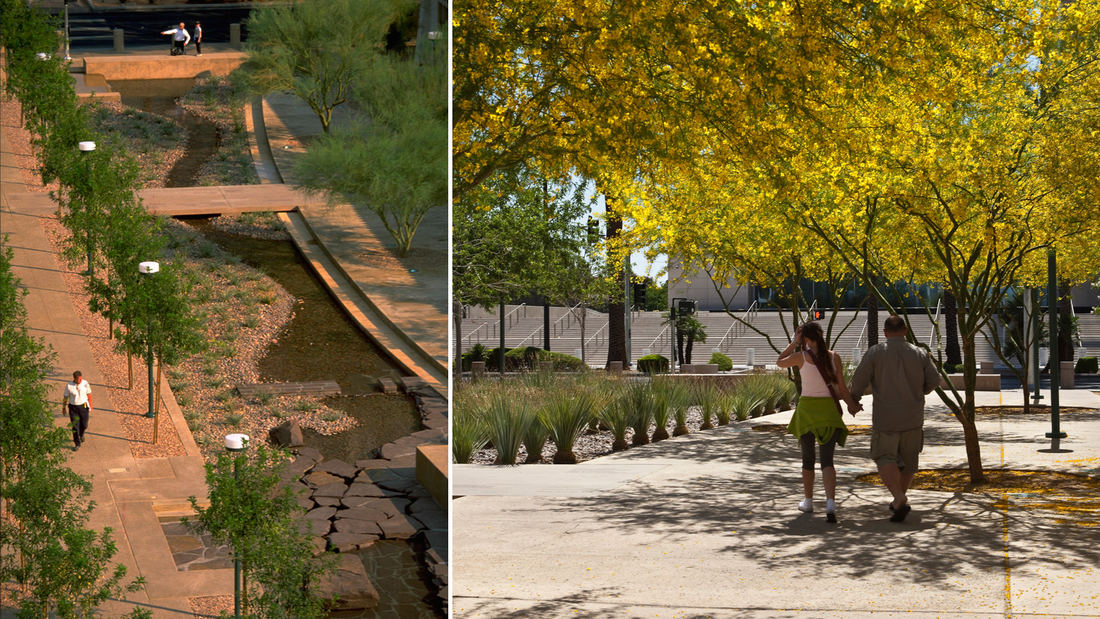 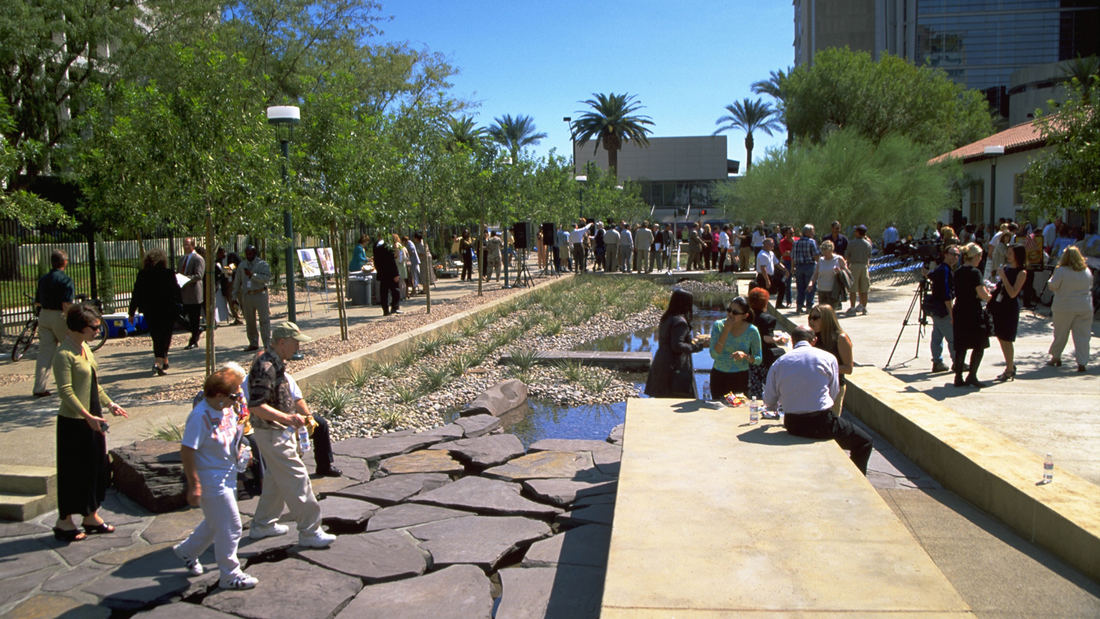 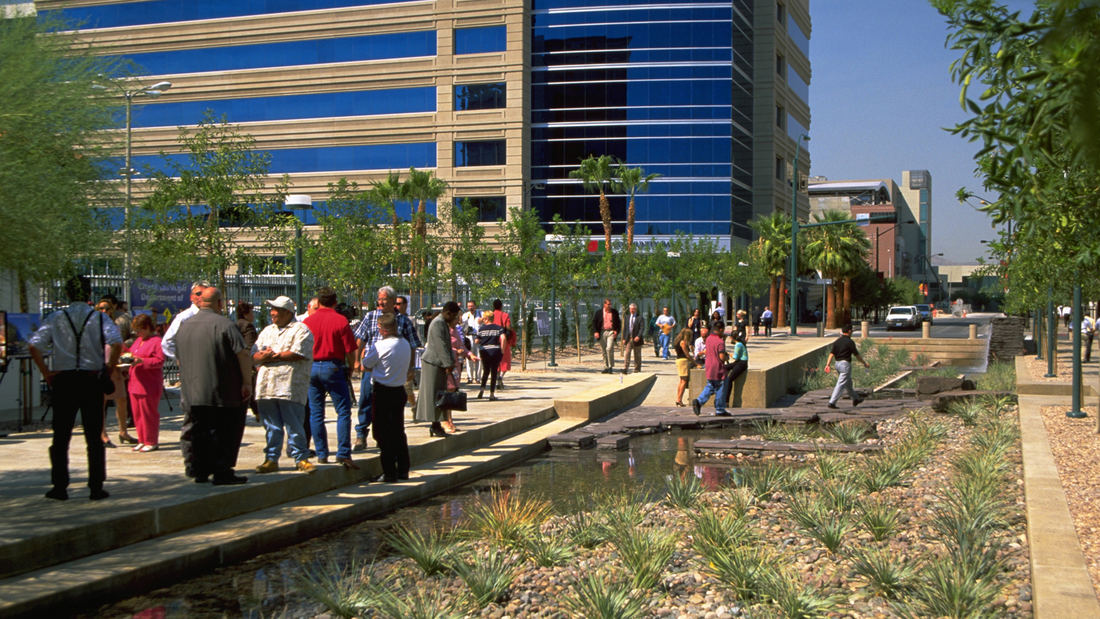 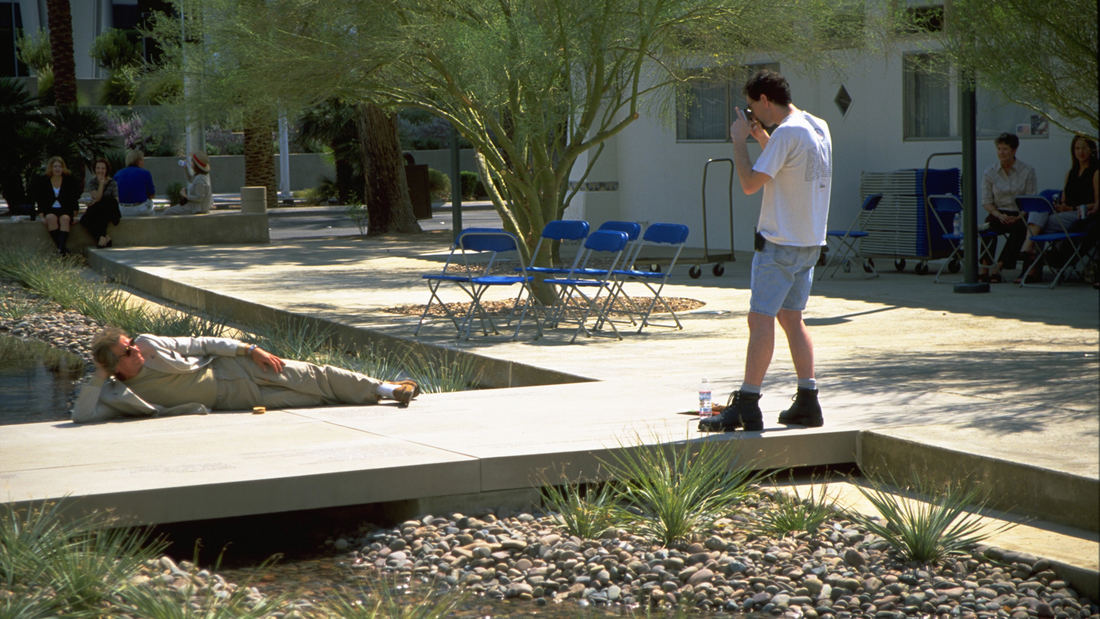 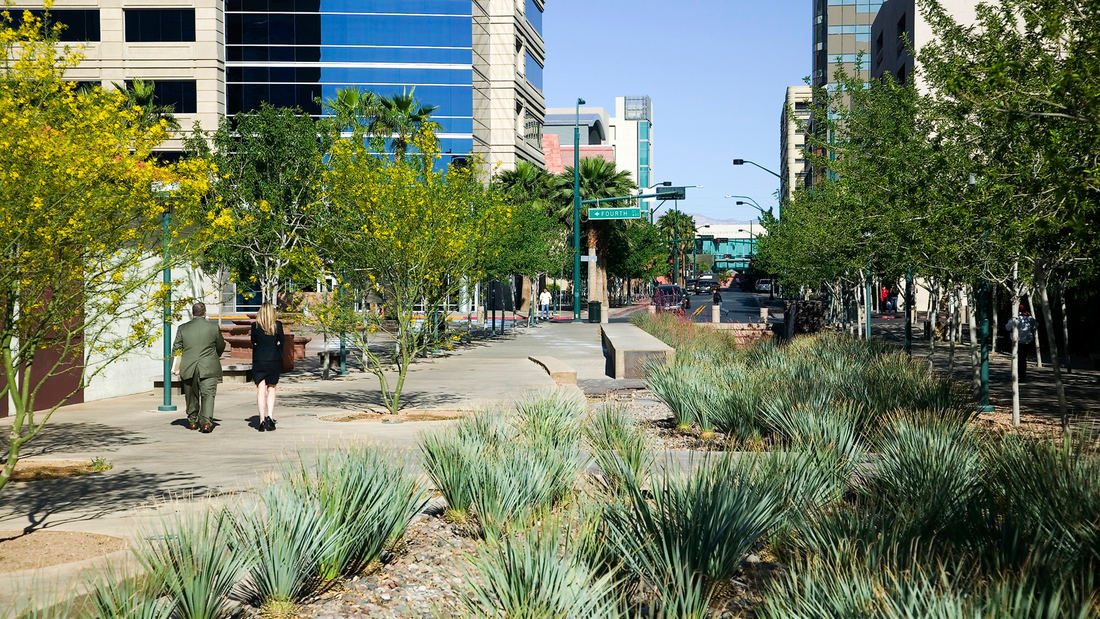 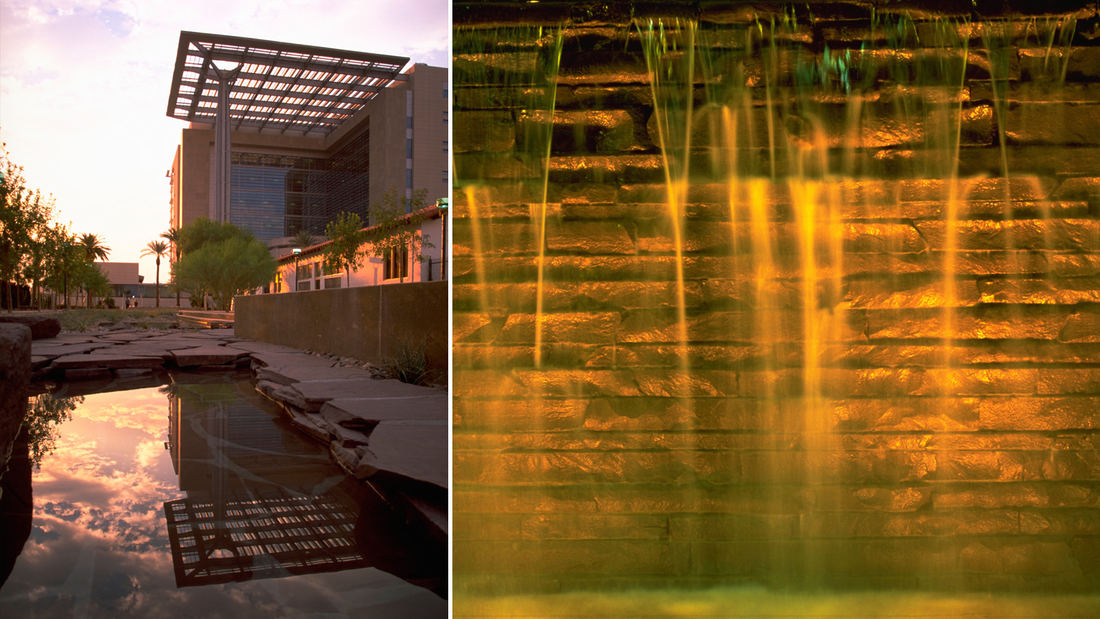 In a city renowned for fantasy, the design of Las Vegas’ Lewis Avenue celebrates the local desert landscape and affirms the street as part of a real-world working district. It was one of the first projects to be implemented in Mayor Oscar B. Goodman’s 2000 Las Vegas Downtown Centennial Plan, aimed at revitalizing the historic downtown core. The City asked SWA, already engaged in two major projects on Lewis Avenue, to design the entire three-block corridor between Casino Center and Las Vegas Boulevards. Identified in the Centennial Plan as the primary east-west pedestrian corridor for the downtown office district, Lewis Avenue links the newly expanded Clark County Detention Center with the new federal courthouse. The city’s goal was to have Lewis Avenue anchor the office core and create a social center for the district, setting the stage for continued redevelopment.

Transforming Lewis Avenue posed major challenges. The street was a harsh and uninviting environment, dominated by an over-scaled, four-lane roadway, with narrow sidewalks that offered no shade from the intense desert sun. Surface parking filled the street right-of-way in the block furthest to the east, making it impossible to walk from one courthouse to the other. Forging connections along the corridor and to the larger downtown district was the underlying impetus for the design. From the outset, SWA worked closely with the Las Vegas Department of Planning and Development and held public workshops with stakeholder groups to ensure that the urban design concepts established in the Centennial Plan were carried though in the corridor’s detailed design. SWA’s initial concept for the corridor was a green framework of trees and plazas unifying the street and linking significant public buildings.

Early key decisions lay the groundwork for a generous pedestrian environment. The design team determined that two of the street’s four traffic lanes could be removed, freeing space to create broad, 20-foot-wide sidewalks with room to plant double rows of trees. Further investigation revealed that the easternmost block had never been part of the street system and, consequently, had none of the typical underground constraints. That, along with the site’s proximity to the federal courthouse and historic Fifth Street School slated for mixed-use redevelopment, made it an ideal location for a plaza. The city secured a permanent landscape easement and negotiated the removal of surface parking from the street right-of-way. Within this framework, SWA searched for a design expression that would distinguish Lewis Avenue as a working street. The immediate urban context as well as the rugged natural beauty of the surrounding desert influenced the form and imagery as the concept took shape.

Trees and water were used to create an urban oasis—a magnet to the many office workers, attorneys, jurors, judges, and others who daily populate the district. Taking cues from the Fremont Experience three blocks to the north, where a high-tech canopy arches over the historic downtown casinos, Lewis Avenue uses a “living” canopy to unite and shade the street. Double rows of ash trees line both sides, giving the corridor a gracious urbanity and comfortable pedestrian scale. Trees are also used to announce major buildings, such as a grove of palms at the Regional Justice Center that extends the entry pavilion onto the street.

Responsive to the desert climate, the design uses water sparingly and evocatively. The plaza takes its form from a desert wash—an irregular channel cut into the land by the flow of water from sudden heavy rains. The “source”—and inspiration—for the wash is a fountain located ten feet above the street level at the front door of the new federal courthouse. To reinforce the perception that the water flows from the courthouse fountain, the wash slopes east to west against the natural contours, providing a more dramatic drop in grade.

Suggesting the carved surface of the desert, the plaza is set two feet below street level, as though the urban surface had been stripped away to reveal the underlying landform. The cobble-lined stream meanders, evolving from a more organic form to a series of narrow channels and a pool that disappear below Fourth Street. The textured quality of the wash, with its cobbles and fractured rock, contrasts with the smooth, simple concrete walks and over-scaled walls and stairs that offer seating along the plaza’s edge. Within the wash, native arroyo plants are used in a dappled pattern reminiscent of the mesquite and coyote bush that naturally dot the desert landscape. The concept of formal tree rows and a rough-hewn desert wash-which together would draw people into their shade and intricate spaces-was embraced by planning staff, the Arts Commission, city council, and other stakeholders. The mayor, in his enthusiasm for the design, found additional funds for the wash, which for budgetary reasons had been conceived originally as a dry riverbed, with only intermittent water

With schematic design approved, SWA spent the next six months refining and testing initial concepts against the realities of site and budget. Since shade was critical in the desert climate, trees were given primary focus. To ensure their health and vigor, SWA designed a continuous trough filled with structural soil that is drained and aerated, allowing roots to spread and irrigation water to saturate the entire trough. Similarly with the wash, SWA worked out the subtle changes in grade needed to achieve varied effects as the water moves along its length.

During this phase, the Arts Commission and SWA crystallized the concept for Poet’s Bridge. Etched with the prose and poetry of Las Vegas writers, it floats above the wash. Even though a bridge had been part of the schematic design, only at this stage did it become a piece of art. Located between the two courthouses—the realm of words and oratory the bridge is conceived as a platform, a kind of Speaker’s Corner. This final stage of the process brought the design concept to fruition. SWA’s contract now was administered by the Public Works Department. Given the integrated treatment of the street right-of-way, SWA took the lead, overseeing the civil engineer and other consultants. The extensive use of concrete, both for economy and contrast with the cobbled wash, required subtle detailing.

The funding source for the project required a compressed schedule of only 12 months for documentation and construction, with a budget of $1.8 million. Within these limitations and the constraints of place, SWA focused resources where they counted most—creating a lush tree canopy and featuring water only sparingly and in keeping with the desert climate. The concept for Lewis Avenue that was established in schematic design remained essentially intact. The result is a unique streetscape that has breathed new life into the district.

SWA’s set of illustrative Design Guidelines promotes a public realm that is a relaxed manifestation of the Qatari vernacular landscape, and serve to maintain the locale’s cultural integrity. Unique among the fast-growing areas of the Gulf region, Doha’s landscape reflects a balance of cultural imp...

Luohu Land Port and Train Station is a border control area and the busiest place in Shenzhen, China. As such, the city was faced with the challenge of moving as many as 600,000 people per day and determined to build a subway. Under the auspices of the Shenzhen Municipal Planning Bureau, a team of consultants from eight different countries worked together on th...

SWA participated in a competition reimagining 19-kilometers of the Guipan River waterfront in Shunde, China. While the Pearl River Delta is one of the fastest growing regions of Southern China, one of the many casualties of this growth was the delta itself. Presently, Shunde has a growing flooding problem enhanced by channelizing, condensing, and containing th...

The Pearl River Delta is the second largest bird migration delta and estuary in Southeast Asia. Preserving and restoring bird and wildlife corridors while also providing regional connectivity, transportation, and development options is at the pinnacle of today’s development challenges. In the Shunde New City Plan, urban development and nature are integra...

SWA’s set of illustrative Design Guidelines promotes a public realm that is a relaxed manifestation of the Qatari vernacular landscape, and serve to maintain the locale’s cultural integrity. Unique among the fast-growing areas of the Gulf region, Doha’s landscape reflects a balance of cultural imp...